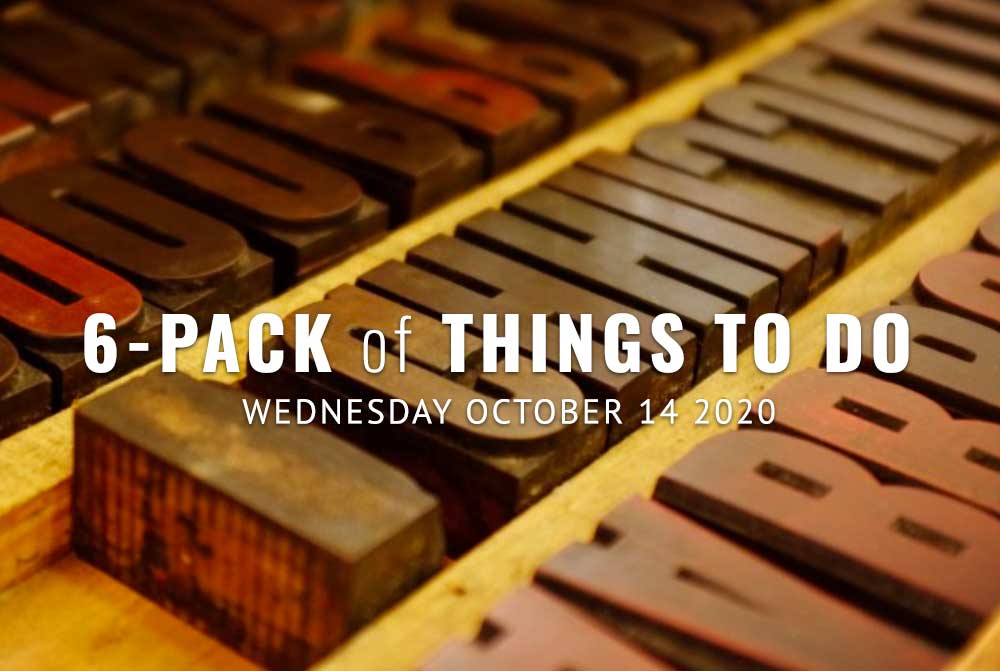 Comments, feedback, stern scoldings and virtual hugs that have been buried deep in your writhing psyche for far too long and only require a moaning breathy release via a stream of conscious liquid verbiage aimed straight at the seventh chakra while still emanating like divine vapor from a spectacular pint of Deschutes 2016 The Abyss: Email 6-Pack of Things To Do at feedback@peaksandpints.com. Cheers!

WAYZFARING: What’s a Wayzgoose? Back in the day it was the end of summer bash thrown by the master printer for his shop underlings and apprentices. Wayzgoose in Tacoma began in 2004 as collaboration between then King’s Books public relations guru sweet pea and Jessica Spring, a professor at Pacific Lutheran University. They both had a desire to recognize Small Press Month and local printers. As we mentioned yesterday, the annual indoor/outdoor event at King’s Books lost its wayz due to COVID but King’s pivots and presents Tacoma Wayzfaring Press, a five-day Wayzgoose walk-by windowganza. King’s and the Tacoma Art Commission are hosting a different letterpress artist producing a print in the bookstore’s front window for bystanders to enjoy from the sidewalk. Today, artist Katie Dean shares her block print talents behind glass. 11 a.m. to 4 p.m., King’s Books, 218 St Helens Ave., Tacoma

BEER FLIGHT: Check your calendars, friends. Yep, we’re in October, a month in which your only concern should be which trimming back the hop bines, monitoring your Pumpkin Spice Frappuccino weight gain, debating inappropriate COVID Halloween costumes ideas, and repairing your backyard things after yesterday’s storm. But under no circumstances should you spend any time thinking, “Will it snow this weekend?” And certainly, certainly do not ask yourself or anyone else, “Have I completed my Christmas shopping yet?” That said, even though Peaks and Pints is still drinking Mexican Vienna lagers and wearing shorts, Santa’s reindeer delivered Christmas beers this week(!). Not just winter warmers, but actual Christmas beers — beers that have Christmas/holiday names. Christmas beers tend to be fuller bodied, often higher in alcohol, with rich malt bases. Oh well. Peaks and Pints isn’t a Scrooge or Grinch — quite the opposite, in fact. Throw a heavy jacket across your shoulders and make your way to our craft beer bar, bottle shop and restaurant in Tacoma’s Proctor District and pick up a to-go flight of Peaks and Pints Pilot Program: Octobermas On The Fly. 11 a.m. to 10 p.m., Peaks & Pints, 3816 N. 26th St., Basecamp Proctor, Tacoma

SQUID JIGGING: From late summer through the heart of wintertime, millions of squid return to Puget Sound, and gorge on small baitfish and crustaceans as they prepare to spawn. Open 24/7, The Les Davis Pier is a rad spot to jig for squid. Jig at night with a thermos of Irish coffee. Bring a notebook, too. Write poetry — not trying too hard. The Les Davis Pier, 3427 Ruston Way, Tacoma

MASTERCLASS ONE: Instead of raising cattle or cruising the water parks, young Kelly Kuo grabbed his clarinet and left the city of Hermiston, Oregon, to travel with the United States Collegiate Wind Band in Europe. This sparked not only a career in music, but also, after graduating from the University of Oregon’s music program, a life of travel around the world playing piano and, eventually, conducting for audiences across the U.S., Europe and Asia. Maestro Kuo will host a vocal masterclass and Q&A session in the University of Puget Sound’s Schneebeck Concert Hall virtually. 12:20-1:50 p.m., Schneebeck Live

MASTERCLASS TWO: Soprano Melody Moore has sung plenty of intensely challenging roles on some of the world’s leading opera stages. She has performed at San Francisco Opera in the title role of Tosca, English National Opera as Mimì in La bohème, Washington National Opera in the title role of Catán’s Florencia en el Amazonas, and more. She has been praised worldwide for her impressive phrasing and control. Opera News reported that she could sing from the “highest forte expression of desire and anger to the lowest pianissimos without any seeming strain.” Moore will lead a virtual masterclass tonight in the Pacific Lutheran University Masterclass Zoom Room. 5:45 p.m., PLU Masterclass Zoom Room, password: PLUOpera

MOVIE: Sonia Warshawski was a teenager when she watched her mom be sent to die. She lived through the Holocaust, but barely. Thanks to her granddaughter’s efforts Warshawski’s story is on the big screen. Leah Warshawski is co-director on the film, Big Sonia, which interweaves Sonia’s past and present and introduces her story to the world. The documentary, which has won multiple national awards, screens tonight, thanks to the University Chaplaincy at Puget Sound. The Chaplaincy and the UPS Jewish Student Union invite you to this semi-synchronous online screening of Big Sonia, the story of the amazingly larger-than-life journey of 4’9″ Sonia. 7:30 p.m., UPS Chaplaincy Vimeo