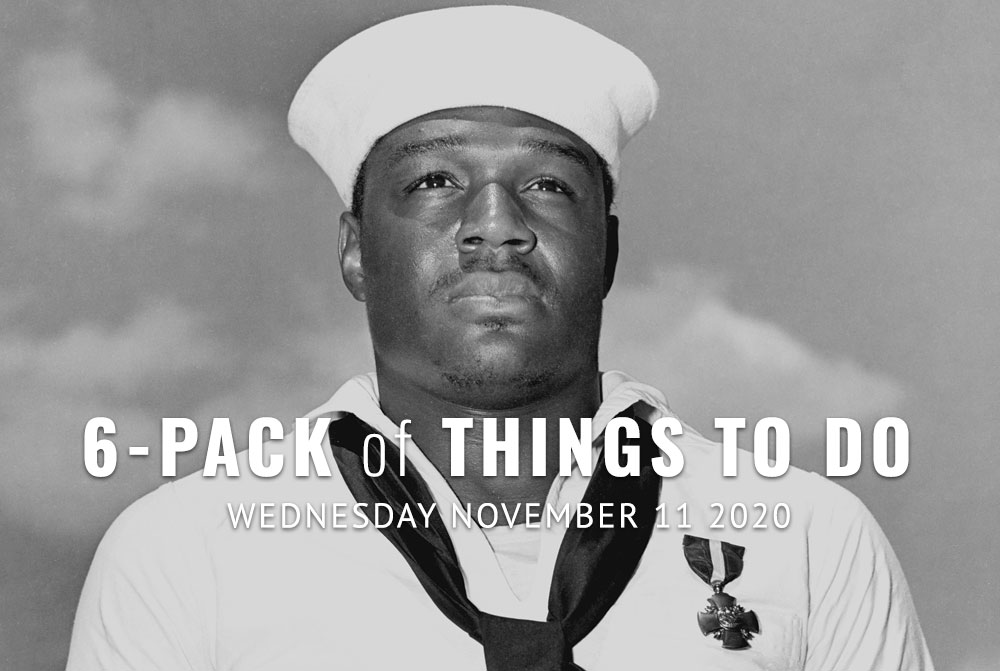 6-Pack of Things To Do appreciates all the veterans and current troops serving in our military. Our freedoms, our heritage and the way of life we enjoy today are made possible because of you. As a thank you Peaks and Pints will offer $1 off all draft pours to veterans and active military today. Thank you for your service to our country. Cheers!

VETERANS DAY: Hear the story of a brave African American in the Navy during WWII during a special virtual Veterans Day commemoration by the Washington State History Museum. Dr. Regina T. Akers of the Naval History and Heritage Command in Washington, DC, and Megan Churchwell of the Puget Sound Navy Museum present “Veterans Day: The Story of Dorie Miller & African Americans in the Navy.” Dr. Akers will share the story of Dorie Miller, an African American Storekeeper Third Class with the US Navy, who was recently honored as the namesake for an aircraft carrier. Churchwell will describe the history of the Puget Sound Navy Yard and how WWII led to changing demographics. 1 p.m., Washington State History Museum Facebook Live, free, photo: Doris “Dorie” Miller, Mess Attendant Second Class, USN (1919-1943) just after being presented with the Navy Cross by Admiral Chester W. Nimitz, on board USS Enterprise (CV-6) at Pearl Harbor, 27 May 1942.

TACOMA FILM FESTIVAL: The Grand Cinema, Tacoma’s art film house that throws Tacoma Film Festival each year, was forced to shut down its brick-and-mortar operations after COVID-19 hit. But all along, the organization has continued to offer programming by creating a Virtual Screening Room platform and renting out new films to patrons weekly. Now festival audiences have virtual access to more than 125 festival films through Nov. 15, including The Planters, a comedy about two marginalized women who discover they share some surprising similarities. Films and programs are scheduled in 3, 7, or 10-day blocks, 72 hours to watch, $10-$18

CLASSICAL: She put up with you through your “angsty phase” and even supported that emo hair you rocked in high school. Today’s the day you can thank your mother for all those voice lessons. You and seven other University of Puget Sound School of Music students will perform a variety of recitals under the title “Noon Convocation: Student Performances.” Piano students Tanya Stambuk and Jamie Forbes will support your mission. 12:20-1:50 p.m., Schneebeck Live Room, free

FILM STUDY: It’s hard to believe Blood Simple is Joel and Ethan Coen’s first film. Suspenseful, wonderfully plotted, complete with a set of unlikable yet intriguing characters, the 1984 release carries a maturity one might expect from more seasoned filmmakers. Yet, the Brothers’ attempt at film noir is spot-on. The cast includes a series of what would become Coen regulars: Dan Hedaya is a Texas bar owner who hires a divorce detective (a wonderfully sleazy M. Emmet Walsh) to kill his philandering wife (the always-amazing Frances McDormand) and her lover (John Getz). Needless to say, things go utterly berserk from there. A series of twisted hijinks unfold, the most eye-popping of which includes a scene with a window, a hand, a knife, a wall full of bullet holes — and a complete disregard for conventional cinema. Today kicks off Tacoma Arts Live’s deep exploration of the Coen Brothers filmmaking. Led by Tacoma Arts Live Executive Director David Fischer, you’ll enjoy the films independently and then engage in spirited discussion of a different film each week. 7-8 p.m., through Dec. 16, Tacoma Arts Live Zoom, register here, $60, photo credit: Georges Biard