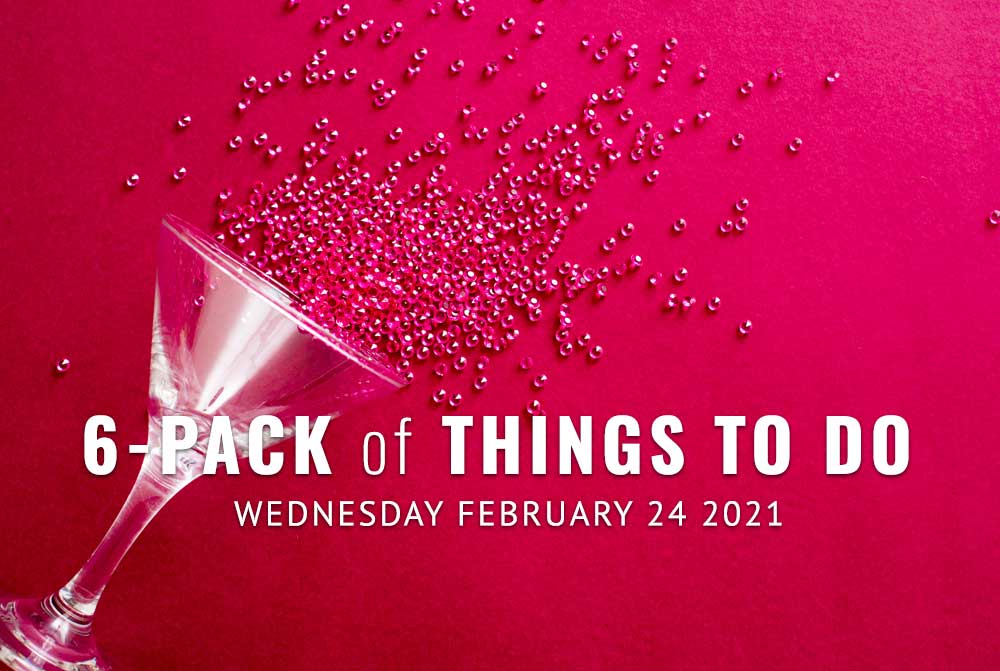 Today is full of events that will expand your horizons — virtually, at least. While you’re checking to see if any vaccine appointments have opened up, you can also explore Black History Month, drink delicious beers brewed by a metalhead, try your stand-up, and more. Welcome to 6-Pack of Things To Do: Wednesday February 24 2021.

COCKTAILS WITH CURATORIAL: What is provenance and why do museums care about it?  How do you find information on lesser-known artists?  Why does art research often overlook, dismiss, and erase the work of artists of color?  Join the Tacoma Art Museum tonight for their next installment of Cocktails with Curatorial to explore one of the ways our curatorial team is working to acknowledge and help bridge the disconnect between museums and Black artists. They’ll kick off the virtual event with a mixologist demonstration from The Mule Tavern.  Interim Chief Curator Margaret Bullock will then introduce you to the world of art historical research. In recognition of Black History month, Bullock t will describe what she is learning about her own racial and other biases and how it is changing her approach to curating and collecting.  She’ll then turn to the work and histories of several Black artists in TAM’s collection who have not yet received the recognition they deserve. 5:30-7 p.m., TAM Zoom Room, free for members, $5 non-members, photo courtesy of Gratuit

BEER FLIGHT: The metal movement has an outsider ethos and no-holds-barred authenticity that appeals to many brewers, including Grains of Wrath Brewery co-owner and Brewmaster Mike Hunsaker. The metal- and punk-loving 48-year-old cut his teeth as a homebrewer and by working for breweries in Chicago and Cleveland, before relocating to Portland in 2014 to become the head brewer at Fat Head’s Brewery, where he became known for original West Coast IPA recipes such as SemperFiPA, GABF gold medal-winning Blitzkrieg Bock and GABF bronze medalist Vienna Lager. Fat Head’s closed, which lead to Hunsaker opening his new punk and metal inspired brewery Grains of Wrath in Camas, Washington, with backers Brendan Greenen, Shawn Parker, and Brendan Ford. Today, Peaks and Pints presents a to-go flight of GoW that we call Peaks and Pints Pilot Program: Grains of Wrath On The Fly. 11 a.m. to 9 p.m., 3816 N. 26th St., Basecamp Proctor, Tacoma

LECTURE: Led by founding conductor Eugene Rogers and comprised of vocal artists including solo performers, educators, conductors and composers; Sphinx EXIGENCE Vocal Ensemble celebrates the power of community and expression through choral music. At noon, the University of Puget Sound School of Music hosts EXIGENCE as a prefunk to their residency at the North Tacoma university. EXIGENCE, an African American and Latino ensemble, will share information about their organization and experiences before their March 12 at UPS. Noon-1:30 p.m., Schneebeck Live, free

FILM: During the 1970s, a new genre of music called funk was making its way into the American mainstream and Seattle was droppin’ the bass big time.  The documentary Wheedle’s Groove profiles Seattle’s once-thriving now-forgotten soul/funk scene of the 1960s and ’70s in entertaining and highly educational fashion. Alma Mater offers an encore screening of Wheedle’s Groove on The Patio. The screening is free and all-ages, perfect for introducing more new generations to this vital moment in Seattle’s music history. 5-7 p.m., 1322 Fawcett Ave., Tacoma, no cover

LECTURE: In this extraordinary moment of unrest and uncertainty, join the University of Washington-Tacoma for a conversation with civil-rights activist Fania Davis as she makes the case for the importance of global engagement in the non-western world. This special discussion, moderated by Dr. Anu Taranath, will examine how restorative justice, equity and indigeneity can offer a path forward in healing and unifying our nation. 5:30-6:45 p.m., UW-T Zoom Room, free, but registration required