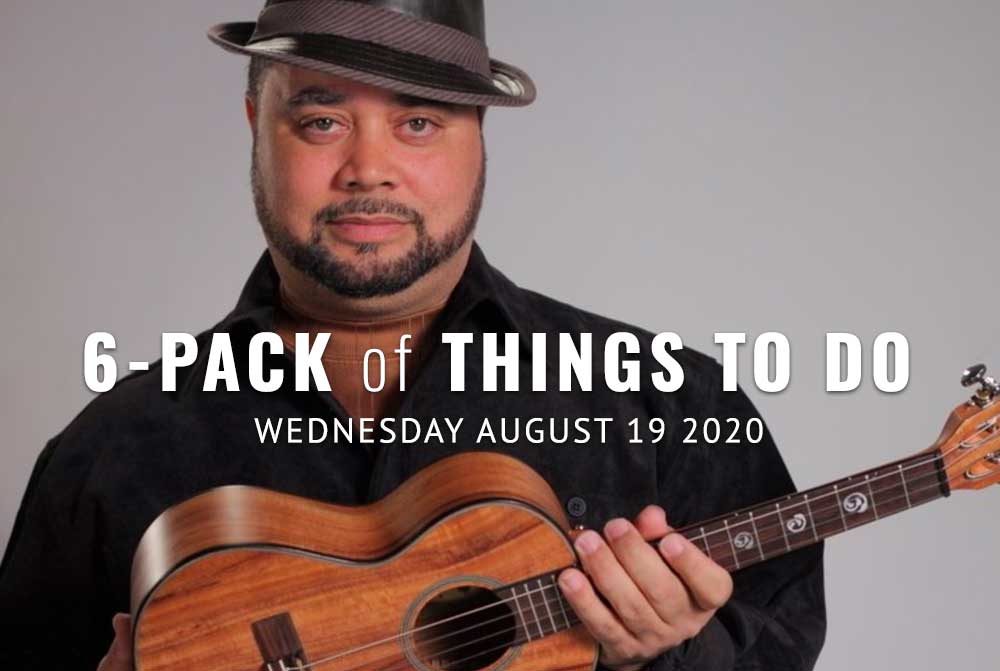 Get your oversized steins ready. Peaks & Pints offers a to-go flight of Oktoberfest biers for das house as part of today’s 6-Pack of Things To Do.

MUSIC: Northwest jazz guitarist Michael Powers is a musician’s musician whose work has continually progressed far beyond the standard jazz genre. Born in New York and raised in the San Francisco Bay area, Powers took up the guitar to strengthen his wrist after a skateboard accident. After graduating from Berkeley High at 15, he relocated to the Emerald City where he continued his musical explorations playing everything from jazz, blues, rock and pop. Powers will perform virtually tonight when the Old Town Summer Concert Series hosts him on their Facebook. Pair the concert with North Coast Brewing‘s Brother Thelonious Belgian Style abbey Ale from the Peaks & Pints cooler.  6:30-8:15 p.m. Old Town Summer Concert Series Facebook Live

OKTOBERFEST: The party began in October 1810, when a great horse race was organized to celebrate the marriage of Crown Prince Ludwig and Princess Therese of Saxe-Hildburghausen. Everyone had so much fun that it was held again, and eventually became an annual event, dubbed “Oktoberfest” in 1872. It has since evolved into a 16-day Munich blowout in late September and early October. Oh, to be in that great mass of humanity, dancing to the throbbing polka beats, scarfing down sausage, kraut, and strudel, and most of all, imbibing from the holy grail … er, stein. … Not this year, obvs. Peaks & Pints did bring in a few Oktoberfest beers during this hot August. Stop by for a to-go flight of Oktoberfest biers that we’re calling Peaks and Pints Pilot Program: Hotoberfest On The Fly. 11 a.m. to 8 p.m., Peaks and Pints, 3816 N. 26th St., Proctor District, Tacoma

THE RED HOT: “The most brilliant ideas in life are often the simplest, and in many ways the most obvious. The Red Hot’s combination of stellar craft beer and hefty, unique hot dogs is just such a scenario. Who would have thought Tacoma would love to horf all-beef hot dogs covered in a variety of awesome toppings — from the standard yellow mustard, chopped onions and relish, to cream cheese, bacon, chili, sauerkraut and more — and wash it down with one of the finest selections of beers you’ll find? Oh, anyone with half a brain, you say? Well, The Red Hot beat ’em to it. Grub up.” That’s how then Weekly Volcano Editor Matt Driscoll described The Red Hot in the rag’s Best of Tacoma 2010 issue. Today, The Red Hot celebrates its 13th anniversary with their new house brew, E9 Brewing’s TRH Bakers Dozen IPA. 11 a.m. to 9 p.m., The Red Hot, 2914 Sixth Ave., Tacoma

SUFFRAGE CENTENNIAL: In 1920 after a decades-long battle, the Nineteenth Amendment to the United States Constitution was ratified, granting women the right to vote. On Nov. 2 of that year, more than eight million women voted in national elections for the very first time. This month marks the National Suffrage Centennial and to celebrate, the Washington State Historical Society invites you to the digitally delivered Suffrage Special Whistle Stop Tour. It kicks off in Spokane today, stopping in Tacoma Aug. 25. Pair the tour video with Short Throw Brewing‘s Mutual Respeck from the Peaks & Pints cooler. Noon, Washington State Historical Society Facebook

MARKET DAY: Lemonade is simple; there’s no need for creativity, tricks or gimmicks. Or artificial sweeteners. And don’t get Peaks & Pints started on how people have served us Crystal Light with a straight face, as if we wouldn’t know the difference. If you like your lemonade fresh squeezed, then head to the Steilacoom Farmers Market this afternoon. Yes, they offer fresh vegetables and fruits from local farms. And, there are specialty food items such as honey and gourmet blends of olive oils. An abundance of food vendors serving meals and desserts from their unique menus? Yes! But, they also have fresh-squeezed lemonade. 3-7 p.m., corner of Lafayette and Wilkes, Steilacoom

SOCCER: A week ago the Tacoma Defiance match against the Las Vegas Lights in Vegas was postponed after a Lights player tested positive for the coronavirus. The match was pushed back one week to tonight at 7:30 p.m. at Vegas’ Cashman Field. These two teams have a unique history featuring the home squad. Specifically, Tacoma has never won at Cashman Field with Lights FC outscoring them 9 to 1 all-time. However, on the flip side, Lights FC has never won at Tacoma while being outscored by a 7:1 margin all-time. Pair the match with Wayfinder Beer‘s Doom Town IPA from the Peaks & Pints cooler.  7:30 p.m., ESPN+