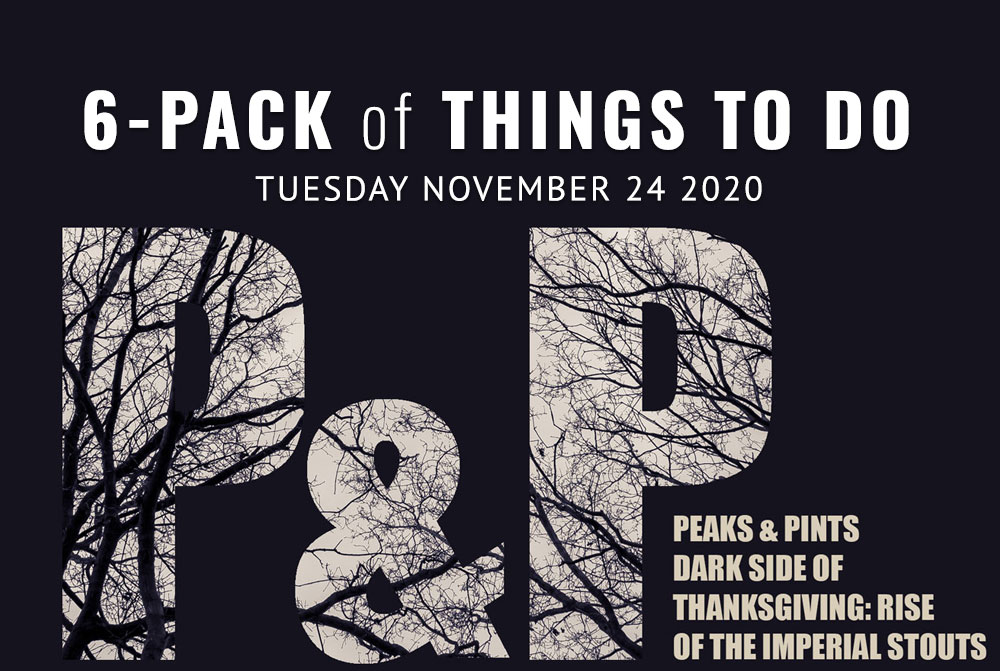 Peaks & Pints is thankful for our awesome, professional staff for keeping everyone happy. They take your welfare serious — making sure masks are on, everything is sanitized, and finding the perfect craft beer or cider to fit your mood. Cheers to them! And cheers for this 6-Pack of Things To Do today. …

ALES FROM THE DARK SIDE: Peaks & Pints Dark Side of Thanksgiving is a celebration of dark beers — to-go. Running through Friday, Nov. 27, salient selections from the dark side will course their ways through our draft lines including Fremont 11th Anniversary Stout, AleSmith Bourbon Barrel Speedway Stout, Modern Times Monsters’ Park Bourbon Barrel Aged Espresso Macaroon Edition, and many more. There is no admission for this event, and all Dark Side of Thanksgiving draft ales will be poured into our Campfire Crowlers to-go. 11 a.m. to 8 p.m. through Friday, Nov. 27, closed Thanksgiving, Peaks and Pints, 3816 N. 26th St., Basecamp Proctor, Tacoma

BEER FLIGHTS: What if you’re not a fan of stouts or porters, but still want to get in on Peaks & Pints Dark Side of Thanksgiving festivities? We got you. First, what makes a dark beer dark? It all comes down to the malts. Though all beer relies on malts (cereal grains that have been allowed to germinate, then dried to halt the germination process), dark beers are unique in their use of black and dark malts. These grains are heavily roasted to achieve the characteristic color as well as the caramelized, toasty flavors we love. The blanket term “dark beer” encompasses everything from classic styles like schwarzbier (a dark German lager) to Baltic porters to the hard-to-find black IPAs. The most familiar dark beers, however, are generally billed as either porters or stouts, but, as we noted, we’re skipping these styles for our to-go dark beer flight, Peaks and Pints Pilot Program: Dark Beer On The Fly. 11 a.m. to 8 p.m., 3816 N. 26th St., Basecamp Proctor, Tacoma

HOLIDAY LIGHTS: Established 26 years ago, Fantasy Lights is a highly celebrated drive-thru display of awe-inspiring light exhibits held annually during the holiday season at Spanaway Park. The jaw-dropping two-mile drive includes more than 300 animated displays and thousands of holiday lights that evoke a profound sense of wizardry and reverence for people of all ages. Open tonight through Jan. 3, Fantasy Lights has added additional safety measures to keep you and their staff safer throughout your visit. 5:30-9 p.m. nightly, Spanaway Park, 14905 Bresemann Blvd. S., Spanaway, $15-$20 per vehicle

NARROWS BRIDGE TOUR: As World War II loomed in Europe, then-President Franklin D. Roosevelt’s administration began putting money into re-armament programs and public work projects to include roads, dams and bridges. Connecting McChord Field and Fort Lewis to the Bremerton shipyard made sense. The slender $11 million dollar project stretched like a steel ribbon across the Tacoma Narrows. The spider’s strand of a structure soon acquired the nickname “Galloping Gertie,” as its 2,800-foot center span would undulate in 3- to 6-foot waves in winds of 3 to 4 miles per hour. Shortly past 11 a.m. Nov. 7, 1940, in a 49-mile-per-hour windstorm, the center span collapsed into the water. A new bridge was built and reopened in 1950. A second bridge was built in 2007. The 2,800-foot center span that collapsed during the windstorm remains on the bottom of the Narrows. Master diver Robert Mester dove the wreckage in the 1990s, and helped place the wreckage in the National Register of Historic Places in 1992, as explained in a short documentary here. Tonight, Pretty Gritty Tours will host a Q&A with Mester. 7:30 p.m., Pretty Gritty Tours YouTube, Photo courtesy of reivax

Category: 6-Pack of Things To Do, Beer Line Blog, Craft Beer, Events and Festivals, In The Cooler, Learn, Newsletter, Shop, South Sound, Tacoma Strong
6-Pack of Things To Dobeer to goChristmascraft beerDark Side of ThanksgivingeventsholidaysSpanawayTacoma
«« Previous Post   |   Next Post »»