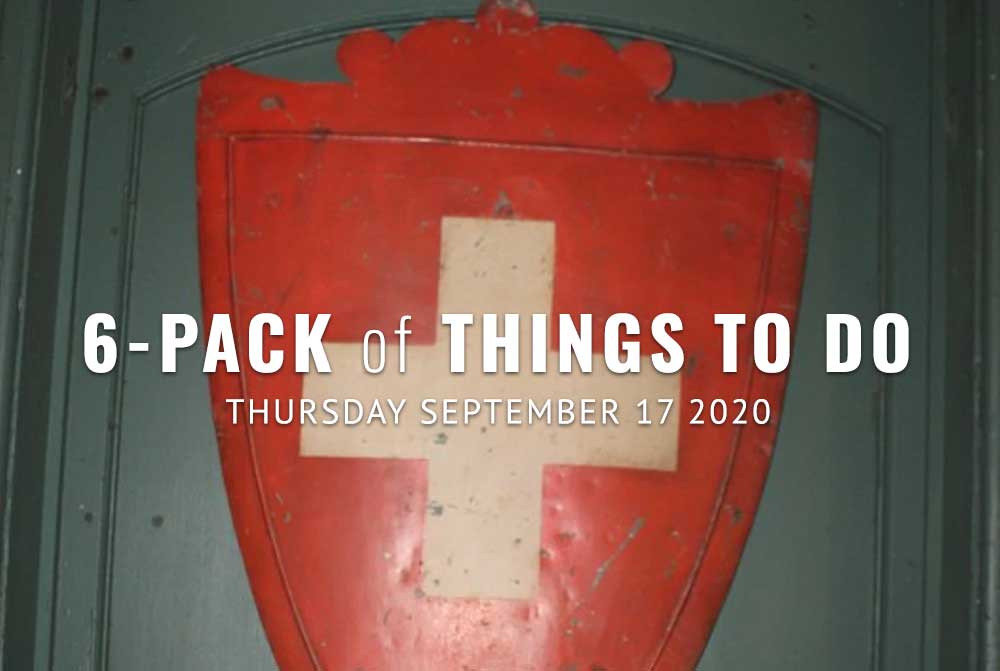 Well, southerly winds brought even more wildfire smoke into Western Washington yesterday. An Air Quality Alert remains in effect today. Therefore, 6-Pack of Things To Do remains inside. Be well!

THE SWISS: “We are heartbroken to have to say that we have come to the thoughtful and difficult decision to permanently close The Swiss Restaurant & Pub,” announced Jack and Carole Ann McQuade Sept. 12. One of the saddest day in Tacoma’s history. Since debuting in downtown Tacoma in 1992, The Swiss — Jack, Bob Hill and Gayl Bertagni — kicked-off downtown’s revitalization, championed local music, introduced craft beer, and became Tacoma’s community hall. Sadly, today marks an online auction of Swiss memorabilia via Ehli Auctions. Maybe The Swiss will live forever on your wall.

CIDER FLIGHT: The Puget Sound is Washington’s largest saltwater inlet and is connected to the Pacific Ocean via the Strait of Juan de Fuca and Admiralty Inlet. The National Oceanic and Atmospheric Administration defines “Northern Puget Sound” as bounded to the north by the international boundary with Canada, and Mukilteo to the south. Peaks & Pints points out these boundaries to define our Washington Cider Week to-go flight of Northern Puget Sound ciders, which includes Herb’s Cider and Lost Giants Cider Co. in Bellingham, and Elemental Hard Cider in Arlington. 11 a.m. to 8 p.m., Peaks & Pints, 3816 N. 26th St., Basecamp Proctor, Tacoma

RANDALL: Top Rung Brewing founder Casey Sobol is a captain in the Thurston County Fire Department. He’s been away fighting the wildfires. He’s the definition of a hero. It’s no surprise he named his IPA, irons, as firefighters use them to open up doors. His bartender Brittany Mundwiler isn’t a firefighter, but she did organize the Lacey brewery’s beer infusion today — Prying Irons IPA ran through her mother’s homegrown Fresno chilies. Stop by and give it a try. 3-9 p.m., Top Rung Brewing, 8343 Hogum Bay Lane NE, Lacey

LIBERTY MEDAL CEREMONY: Today is Constitution Day and the National Constitution Center will be holding their annual Liberty Medal award ceremony. The National Constitution Center’s congressional charter is “to disseminate information about the U.S. Constitution on a nonpartisan basis.” The Liberty Medal recognizes and “honors men and women of courage and conviction who strive to secure the blessings of liberty to people around the globe.” This year, the Liberty Medal will be awarded to Justice Ruth Bader Ginsburg. Join the University of Puget Sound for a brief pre-event program and shared livestream of the ceremony. Pair the ceremony with Silver Moon Brewing’s F Cancer IPA from the Peaks & Pints cooler as Ginsburg’s mother died of cancer when Ruth was in high school. 3:15-5 p.m., UPS Liberty Lounge, photo courtesy of John Mathew Smith & www.celebrity-photos.com

SOCCER: Yesterday’s Tacoma Defiance match at Reno 1868 FC was been postponed due to a positive COVID-19 test within the Defiance organization. The fixture has been rescheduled for tonight at Greater Nevada Field. The playoffs are out of reach this year, but, according to wertacoma.com, “Coach Chris Little points out that the Tacoma Defiance season has similar challenges to real life in this challenging year. It has forced a young squad — averaging just over 20 years old — to adapt to conditions that no one ever expected. The season ends with two matches a week for three weeks.” 7:30 p.m., ESPN+

MOVIE: The Grand Cinema streams A Towering Task: The Story of the Peace Corps in their Virtual Screening Room. Narrated by Annette Benning, Alana DeJoseph’s documentary tells the remarkable story of the Peace Corps, from its 1961 launch by President John F. Kennedy to its crisis with COVID, a rise in nationalist sentiment and deep cuts to governmental-agency budgets. The film puts a human face on the Peace Corps — and makes sense of its history of idealism, improvisation, politics, and at times its failings. Pair the movie with Sierra Nevada’s delicious charitable Dankful IPA from the Peaks & Pints cooler. $10 movie, photo courtesy of the Peace Corps