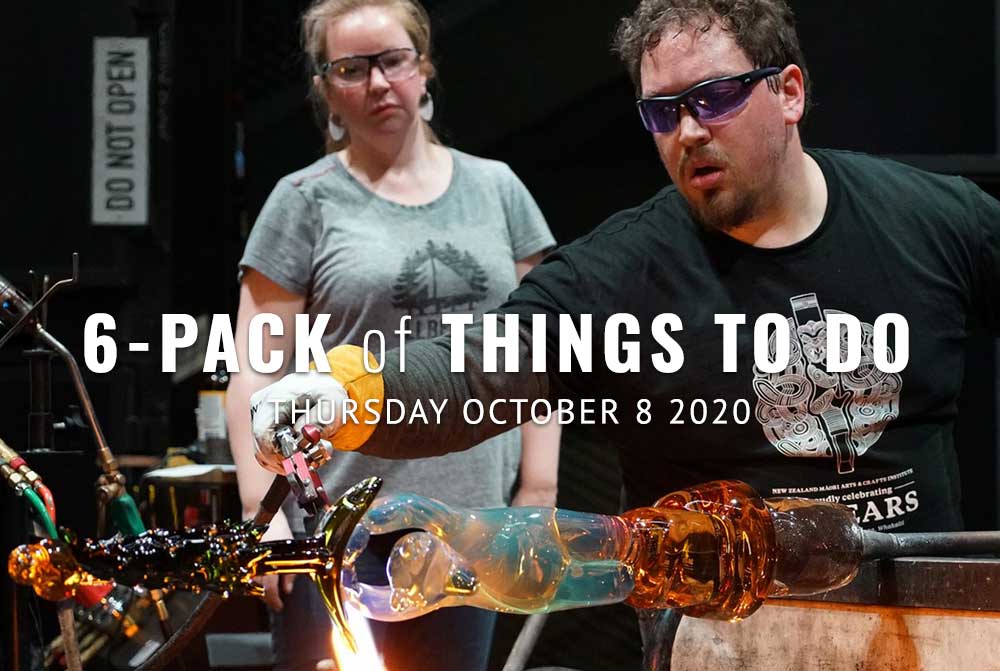 6-Pack of Things To Do: Thursday October 8 2020 offers you an artist studio tour, a flight of Oreo-flavor beer, the chance to buy Tacoma Film Festival tickets, pears at the Broadway Farmers Market, American Electorate lecture, and a spot to hang with Tacoma Council Member Kristina Walker. Cheers!

ARTIST STUDIO TOUR: The Washington State History Museum’s 2020 In The Spirit Contemporary Native Arts exhibition has made our 6-Pack of Things To Do several times during its run, which isn’t surprising since its outstanding every year, blending the traditional and the contemporary more than other Native arts shows. Dan Friday (Lummi), one of the artists in their year’s In the Spirit exhibition, will take you on a virtual tour of his studio where he’ll describe the creation and inspiration behind his works, creation and inspiration behind his works “Owl Totem” and “Forager Totem” featured in the show. Note: This is one of 16 events between Sept. 10 and Oct. 17 that comprise the In The Spirit Virtual Arts Market and Festival. For a full schedule, click here.  6 p.m., Washington State History Museum Facebook, photo courtesy of Corning Museum of Glass Facebook

BEER FLIGHT: Consider the Oreo. In the 100 years since its invention, Oreo has become the representative cookie of modern American culture. Everyone loves Oreos. (Quiet down, contrarians. We said everyone loves Oreos.) Oreos are mixed into Dairy Queen Blizzards. They’re used to make chocolate-y delicious pie crusts. Weird Al Yankovic wrote a song about Oreos called The White Stuff. And, they make delicious imperial porters and stouts. It’s not like you didn’t know there were porters and stouts made to emulate Oreos. It’s a pretty obvious and common adjunct flavor profile, chocolate and vanilla. Smoosh ’em together, and that’s basically an Oreo. Today, Peaks and Pints has Oero on the brain and in our to-go beer flight of imperial porters and stouts. Chocolate meets vanilla meets marshmallow meets alcohol in our flight, Peaks and Pints Pilot Program: Oreo Imperials on The Fly. 11 a.m. to 10 p.m., Peaks & Pints, 3816 N. 26th St., Basecamp Proctor, Tacoma

TACOMA FILM FESTIVAL: It is hard to think of an event less suited to the age of the coronavirus than a film festival — thousands of strangers from all over the globe coming together to sit in packed screening rooms for a few hours and, if they’re lucky, mingle at an after-party. The Grand Cinema knows this. Their 15th Tacoma Film Festival is going virtual next month. The festival will take place Nov. 6-15 with a variety of shorts packages and feature-length films available for audiences to view from the comfort of their homes. Tickets and passes go on sale today with free festival passes being offered to Tacoma and Pierce County students from primary school to college. Tickets can be purchased through the TFF website.

MARKET DAY: There’s a good chance El Dorado will make an appearance today at the Tacoma Farmers Market — Broadway. El Dorado will not battle against dastardly foes as it’s not a wrestler, but rather a pear harvested at this time of year. The large fruit with a lumpy surface could be in several vendor booths during the downtown Tacoma market, along side specialty food producers, hot food vendors, and artisans. If not, stop by Peaks and Pints for a can of Hoof Hearted Brewing Everybody Wants Some El Dorado Triple IPA, yo. 10 a.m. to 2 p.m., Ninth and Broadway, downtown Tacoma

LECTURE: The University of Puget Sound has hosted Thompson Hall Science and Mathematics Seminars on a regular basis since 1978, focusing on topics in STEM (Science, Technology, Engineering, and Math) presented by faculty members and invited guest speakers. Today, Jake Price of the UPS Department of Mathematics and Computer Science, lectures on, “Should We Trust the Polls?: Polling the American Electorate.” Over the last seven presidential elections, the Republican candidate has only won the popular vote a single time, in 2004, yet has become President three times. George W. Bush lost the popular vote in 2000 but became President. He won the popular vote in 2004 and was re-elected. Donald Trump lost the popular vote in 2016 by more than 3 million votes yet became President anyway. How could this be? The answer lies in the Electoral College. After Price’s lecture the UPS Google Meet opens for discussion. 4:10 p.m., UPS Google Meet, free and open to the public.

SOUTH SOUND SURFRIDER: Join the South Sound Chapter of Surfrider Foundation for their October Chapter Meeting with guest speaker Tacoma Council Member Kristina Walker. Walker, who is also executive director of Downtown On the Go, is passionate about creating more opportunities for all residents of Tacoma by closing equity gaps and addressing disparities that exist for people of color and vulnerable communities, supporting and empowering Tacoma’s youth, expanding economic opportunity by attracting new businesses that will create good-paying local jobs, improving multimodal transportation, and protecting access to green-spaces. Discover what’s on her mind, as well as the South Sound Chapter of Surfrider Foundation agenda for autumn, in the Surfrider Zoom Room. 6:30-8 p.m., Surfrider Zoom Room