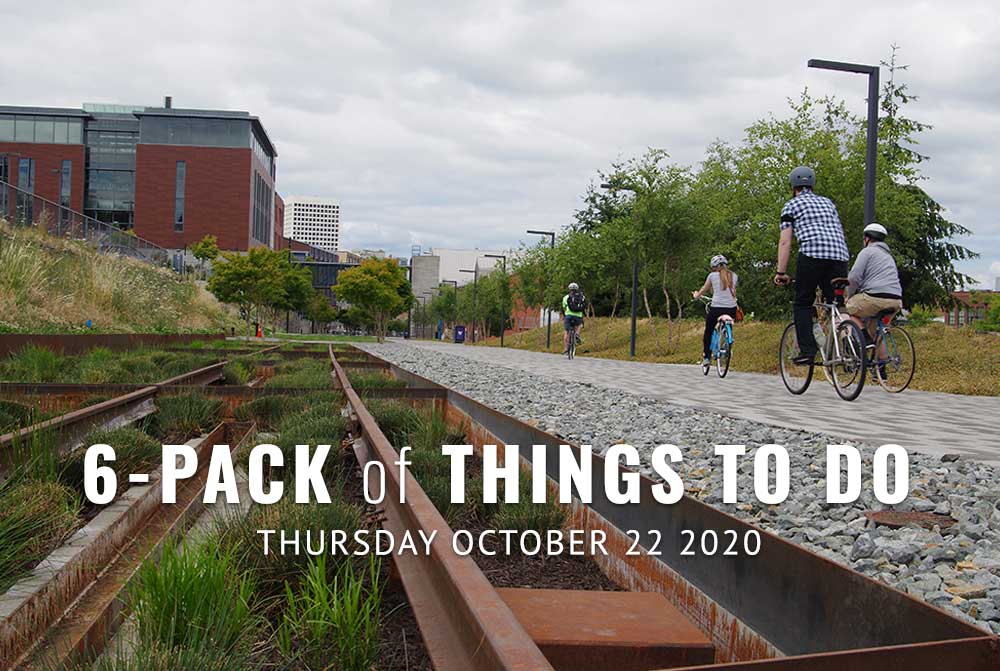 The temperature’s dropping, but the roster of activities both entertaining and educational around town isn’t. Today you can learn about Tacoma Prairie Line rail corridor, Korean poet Yun Dong-ju, and writing for senses; you can drink beer from an award-winning brewery, or head to the market. Enjoy today’s 6-Pack of Things To Do.

VIRTUAL TOUR: Up until 2003, trains pounded the historic Prairie Line rail corridor from the Thea Foss Waterway to the Brewery District, passing rickety warehouses and dens of iniquity — before UW-Tacoma rang its school bell for its first on-site freshman class. Pretty Gritty Tours hosts a free virtual tour of old railroad spur line known as the Prairie Line designed to be kid friendly and engaging. Pretty Gritty could have gone the seedy route, but instead will provide some educational and inspirational opportunities for those working through distance learning. 11 a.m., Pretty Gritty Facebook Live

BEER FLIGHT: Wade Underwood and his partners founded Three Creeks Brewing in July 2008. Underwood brewed on a 10-barrel system in his brewpub, cranking out beers including Stonefly Session Pale, Knotty Blonde, and the award-winning Fivepine Chocolate Porter, which grabbed another medal, gold, at the 2020 Great American Beer Festival. Today, Three Creeks brews on a 30-barrel brewhouse a mile or so to the south. We’re not sure if that’s where this year’s Great American Beer Festival medals hang: silver in Brown Porter for FivePine Porter, gold in Fresh Hop Beer for Conelick’r, and “Brewery Group of the Year” honors. Peaks and Pints offers both winning beers, plus their Crowdpleaser IPA and Suttle Haze IPA, as part of our to-go flight, Peaks and Pints Pilot Program: Three Creeks On The Fly. 11 a.m. to 10 p.m., Peaks & Pints, 3816 N. 26th St., Basecamp Proctor, Tacoma

MARKET DAY: Head in without a plan and the Broadway Farmers Market can wipe away an entire day, filling you up from breakfast to lunch them goods for dinner. From 10 a.m. to 2 p.m. the Broadway Farmers Market invites everyone to experience the fine wears of the land, and the natural abilities of camaraderie and free spirits, support the local farmers and eat food all at one location. The farmers’ market is probably the easiest way to get into buying local. 10 a.m. to 2 p.m., Broadway between Ninth and 11th in downtown Tacoma

YABA DABBA DOO: Embark on a Jurassic journey with Dinosaur Adventure’s audio tour that will guide you through their thrilling dinosaur drive-thru exhibit at the Washington State Fairgrounds. Mom and Dad can steer through the house that scones built while the carload encounter a massive Brachiosaurus, confront a pack of wild Velociraptors, and listen to Jeff Goldblum’s weird growl-laugh (we’re checking on that last part). 9 a.m. to 8 p.m., Washington State Fairgrounds, 110 Ninth Ave. SW, Puyallup, $49-$109 online only

POETRY: Yun Dong-ju (1917–1945) graduated from Yeonhui College, Seoul, and moved to Tokyo for further poetry studies where he was arrested on charges of participating in the anti-Japanese independence movement. He died from torture at Fukuoka Prison in 1945. A collection of his poetry was published posthumously in 1948 as Sky, Wind, and Stars. Today, the Asia Pacific Culture & Art Center hosts a virtual class for students to learn the heart and attitude of Yun Dong-ju. 5-5:45 p.m., Asia Pacific Culture & Art Center Facebook

WRITING: We love to write smell. We love to write, smell. We love to write “smell.” If you can figure out which one of these works you’re in. Congratulations. You can do it. And so you should. A letter, a poem, an e-mail, a memo, a short story, graffiti, a discourse on the eating habits of the indigenous populations of Chile. It really doesn’t matter. Today, the Tacoma Public Library and Write 253 host Samuel Corales — a spoken word poet and hip-hop/contemporary dance instructor — for a virtual writing workshop. He’ll teach you to express sight, smell, sound, taste, and other senses through writing. You really should attend, because writing something down is a really, really good way to prove your existence to future generations. That’s right, participate in Exploring Senses in Writing with Samuel Corales and you’ll be immortal. 7-8:30 p.m., Tacoma Public Library Zoom Room