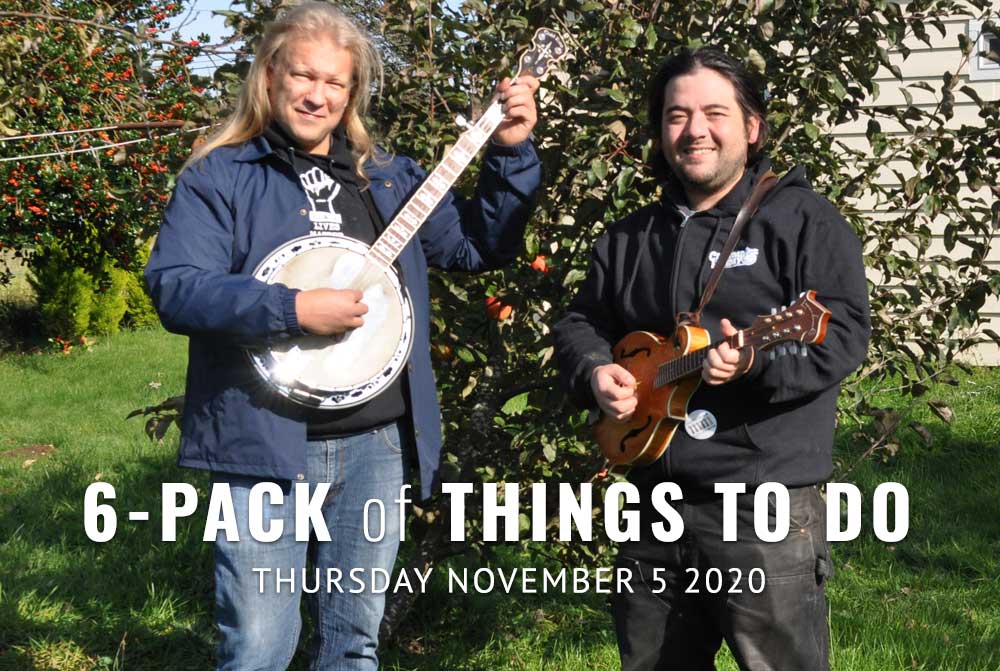 In the face of constant malaise, we can’t simply resign ourselves to being gloomy sourpusses. This is the South Sound. We need to use perpetual optimism to wrest proactive relief from the jaws of utter dismay. In other words: 6-Pack of Things To Do. …

MUSIC: Forest Beutel and Kevin Shintaku have been entertaining the South Sound, frankly the whole world, since the pandemic hit. The longtime bandmates — Beutel plays banjo and harmonica in The Barleywine Revue and The Rusty Cleavers and Shintaku adds mandolin and guitar in both bands — have collaborated on a live streaming concert, More Ducks More Fun. They’ve entertained with originals and covers, from Bill Monroe to Bill Withers and Tacey Chapman to Janis Joplin to Tom Waits. Tonight, Season 2, Episode 2 — Electric Boogaloo, the duck lovers turn on, plug in, and drop out. 6 p.m., Crawdad Holiday YouTube Channel

BEER FLIGHT: The nights are longer. And colder. Peaks & Pints will serve five beers as dark as the 5 p.m. sky for today’s to-go beer flight as it’s International Stout Day. The original “stout porters” of 18th century London were brewed for their heartiness in the face of harsh storage conditions. That’s right; stouts didn’t start as a style; it started as an adjective. Had you walked into a pub around 1750, you likely would have called for a stout porter. Then in the early 1800s, the Irish brewery Guinness brought the alcohol content down to just over 4 ABV, and started sending their iconic beverage to the States in 1817, converting stout from adjective to noun. In 1992, the industry’s first stout aged in a bourbon barrel was initially tapped at Goose Island’s Clybourn Avenue brewpub. So ready the #StoutDay for our to-go stout flight, Peaks and Pints Pilot Program: Stout Day On the Fly. 11 a.m. to 10 p.m., Peaks & Pints, 3816 N. 26th St., Basecamp Proctor, Tacoma, guaranteed seating on OpenTable app

PRESIDENTIAL POLITICS: Over the past year, the University of Puget Sound has hosts a virtual lecture series on presidential politics. Tonight, the seventh and final lecture goes down with political scientist Michael Artime and presidential historian Mike Purdy (’76, M.B.A.’79) discussing the “2020 Battle for the Soul of America” and Trump’s drama. 7-9 p.m., UPS Zoom Room

WRITING CLASS: Join Tacoma Poet Laureate Abby E. Murray for a writing workshop, presented in partnership with Write253. Come listen to poems that explore the solitary mind, and stock up on encouragement to keep creating. This workshop includes prompts to get you writing through the distance of a community in the middle of a pandemic. 7-8:30 p.m., Writing Inside the Bubble with Tacoma’s Poet Laureate, RSVP

THEATER: You’re traveling through another dimension — a dimension not only of sight and sound but of mind. A journey into a wondrous land whose boundaries are that of imagination. That’s a signpost up ahead: your next stop: Spacies: Spacies Of The Lambs. The Spacies radio serial follows Commander Rash Blasterbelt and Ensign Jock Junior, members of the Intergalactic Space Guardians, as they travel through the cosmos to defend the innocent. Pair this space theater episode with Revision Brewing’s To Dream hazy IPA from the Peaks & Pints cooler. 8 p.m., Tacoma Little Theatre Zoom