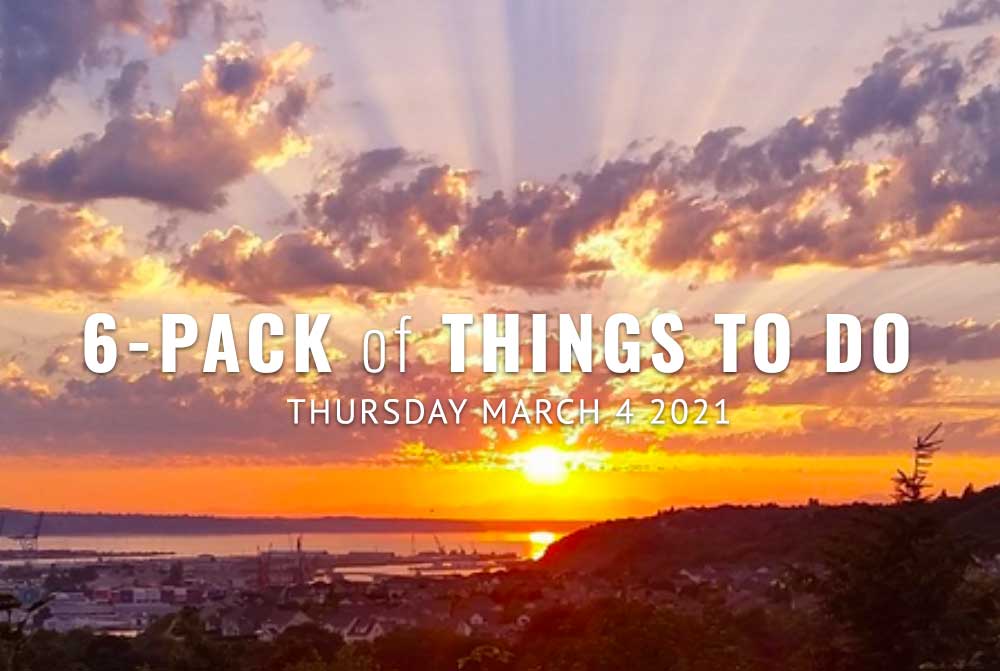 You can immerse yourself in interesting activities in today’s 6-Pack of Things To Do — both online and in person, since the North Tacoma neighborhood Group launched a scavenger hunt. You can also learn things virtually in the Science Dome and Washington State History Museum. And, of course, the Destiny City Film festival continues.

SCAVENGER HUNT: The North Tacoma Neighborhood Group hosts Springtime Scavenger Hunt through this month. It’s free and easy: Simply jump on the North Tacoma Neighborhood Group website, register for the scavenger hunt, a list will be sent to you, then walk Northend Tacoma searching for the items on the list. They are things that you might see on the sidewalk, front of a house or in a window. When you spot an item, make a notation next to the item on the list. Next, take a photo of your finished list (with notes next to each “found” item) and email it. The organizers will review your list and enter you to win one of three gift baskets.

BEER FLIGHT: The term India Pale Ale has evolved quite a bit over the past 25 years and has taken on a life of its own. Moving away from what was known over in Great Britain, IPA has typically meant a very hop forward, strong pale ale, taken further by the trend of the West Coast IPA. In the last 15 years or so, IPA and West Coast IPA signified the beer you were buying and drinking was hop forward in terms of bitterness, fruitiness and aroma.  The New England-style beers have great hop aroma, but when brewed as intended, have much less bitterness than the very popular West Coast Style IPA. Peaks & Pints is here to bring sexy back … at least for today. We think it’s about time to shine a light on a few old-school tasting IPAs — some old and some new. Stop by our Proctor District craft beer lodge and grab Peaks and Pints Pilot Program: Bitterness On The Fly. 11 a.m. to 9 p.m., 3816 N. 26th St., Basecamp Proctor, Tacoma

FILM: The 8th Destiny City Film Festival continues virtually with the 39 independent films available through the end of the festival March 7, including Beast Beast where Director Danny Madden takes his award-winning short film Krista and transforms it into an unsettling feature exploration of adolescence, performance, and identity. In a quiet southern town, popular and charismatic theatre kid Krista finds herself increasingly drawn to Nito, the new student in her high school who catches her attention with his impressive skating videos. The two share an easy rapport and quickly grow close. Unbeknownst to her, their lives and that of her gun-loving neighbor, Adam, will soon become intertwined — until they reach a breaking point. Photo courtesy of Vanishing Angle

SCIENCE DOME: The Pierce College Science Dome is a 58-seat digital planetarium that is the only one of its kind in the South Puget Sound region. This immersive and interactive facility allows visitors to view the night sky from anywhere in the known universe on a cloudy day, be immersed in an alien environment with breathtaking full-dome images, explore the Egyptian pyramids and so much more. Tonight, the Pierce fires up the dome for a live talk about the zodiac and real-time telescope observations captured with the Slooh telescope network. Pair the presentation with an Ecliptic Carina Peach Sour can from the Peaks & Pints cooler. 6-6:40 p.m., Pierce College Science Dome Zoom, free, register here

HISTORY AFTER HOURS: The Washington State History Museum kicks off their 2021 History After Hours series for those who are 21 or older and love to celebrate living things in Washington state. Sign-up for the virtual event and meet Maria Mudd Ruth, author of “Rare Bird: Pursuing the Mystery of the Marbled Murrelet”; Dan Ayres, coastal shellfish manager with the Washington Department of Fish and Wildlife who first learned about our coast’s shellfish from his father and grandfather; Alysa Adams, interpretive specialist at the Mount St. Helens Visitor Center who will lead a fun craft; Julie Nelson, Education & Outreach coordinator at Methow Beaver Project; David Wheeler, WSU Dept. of Plant Pathology discussing fantastic fungi; Robert Michael Pyle, butterfly expert and author sharing early lepidopterist tales Harvest Moon Howell, Quinault storyteller who will regale you with the legend of the Bear and the Heron; Renee Cebula, the Museum’s favorite cocktail historian mixing another dreamy concoction. 7-9:30 p.m., Washington State History Museum Zoom, $20-$25, register here

COMEDY: Monica Nevi went straight outta Renton to earn a degree from Seattle University. A collegiate basketball player, after injuries ended her career she decided to move forward with the next most accepted career for a young woman and pursue her strong interest in stand-up comedy. After starting and performing for the duration of her time in college and beyond Monica continues to perform all over the country, including tonight at the Tacoma Comedy Club. 7:30 p.m., 933 Market St., Tacoma, $10-$20