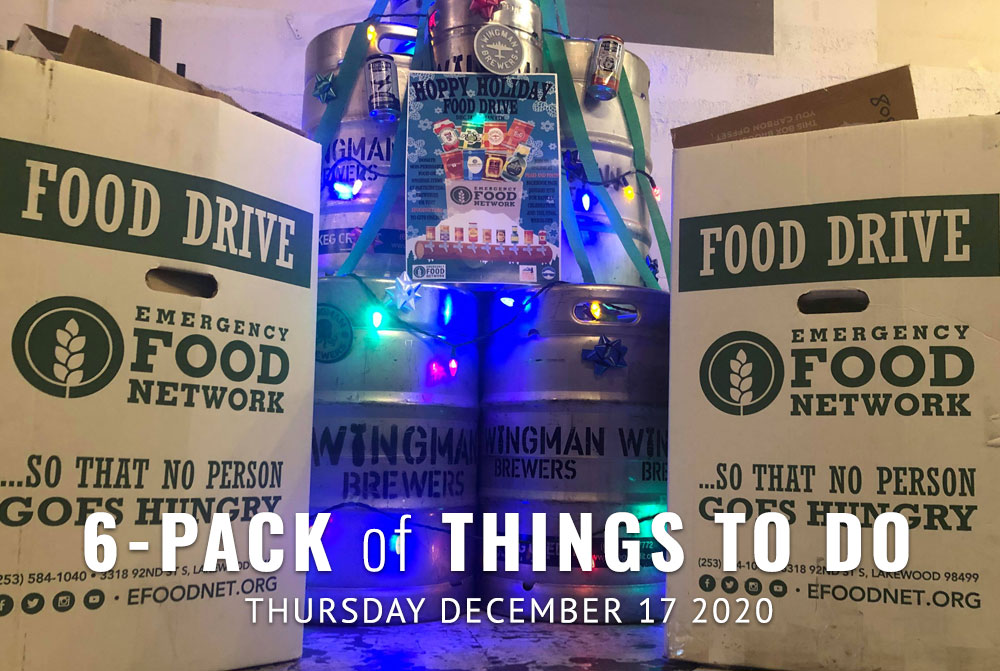 Is it just Peaks & Pints or have the ’20s not seemed so fun this time around? Of course, we don’t have anyone at our craft beer bar/bottle shop/restaurant who can directly compare 2020 to 1920, but the mental stock images of flappers and speakeasies and jiving to big band jazz certainly stand in stark contrast to this year. Well, at least there’s the 6-Pack of Things To Do. Cheers!

HOPPY HOLIDAY FOOD DRIVE: The average slice of white bread has approximately 70 calories while the average beer has approximately 150 calories. Dividing the two, that’s a little over 2 slices of bread per beer. Such information ranks among the least helpful out there for a bunch of reasons, including setting up a false equivalence between beer and food. This is why Wingman Brewers has joined their fellow local breweries and cidery to provide meals — not beer — to hungry Pierce County residents during this unprecedented time of need. Douville Home Group, in partnership with Peaks & Pints, is hosting the annual Hoppy Holiday Food Drive, where local breweries and cideries come together to support Emergency Food Network. Through Jan. 8, please bring non-perishable food items and hygiene products to 7 Seas Brewing, E9 Brewing, Grit City Ciderworks, Narrows Brewing, Odd Otter Brewing, Sig Brewing, Wet Coast Brewing, and Wingman, as well as Peaks & Pints, to be distributed to thousands of Pierce County residents in need. Make a donation online through www.hoppyholidayfooddrive.com toward your favorite brewery’s totals. Then, on Jan. 11, join in the celebration over Peaks & Pints Facebook Live for the final weigh-in and announcement of the Hoppy Holiday Food Drive brewery winner and raffle winners.

BEER FLIGHT: Every December — while the bartenders close down our Proctor District craft beer bar, bottle shop and restaurant for the night — Peaks & Pints co-owner Pappi Swarner grabs three holiday beers, heads upstairs to his office, cranks his computer speaks to an 11 and watches holiday Youtube videos. Obviously, he can’t perform his holiday tradition this year … at Peaks & Pints. No, his holiday glee now takes place inside his home, much to the chagrin of his wife and daughter. In the spirit of giving, we offer you the chance to share his joy. Today, he pairs three seasonal beers with A Very Cool Christmas, where 16-year-old girl (Brooke Nevin) meets the real Santa Claus (George Hamilton) in a mall, then gives him a metrosexual makeover. Pappi bumps up the ABV on Peaks and Pints To-Go Christmas Beer Flight: Very Cool Christmas because this movie is sooo wrong on sooo many levels. 11 a.m. to 8 p.m., 3816 N. 26th St., Basecamp Proctor, Tacoma

VIRTUAL SKY TOUR: The Pierce College Science Dome will take you on a virtual tour of the night sky. For 45 minutes the Science Dome staff will incorporate a live talk and (weather permitting) real-time telescope observations captured with the Slooh telescope network on their Science Zoom Dome. The topic this week is the winter solstice, the upcoming great conjunction of Jupiter and Saturn, and the winter sky. Pair this week’s Science Dome outing with a Little Beast Brewing Dear Giant IIPA from the Peaks & Pints cooler.  6-6:45 p.m., Science Zoom Dome, register here

HOLIDAY WINDOWS: Supported by the North End Neighborhood Council, “Holiday Windows” is spreading cheer across Tacoma’s North End through a neighborhood advent calendar, where a total of 24 residents have decorated their windows in celebration of the season. Each day, through December 24, a new beautifully decorated window will be revealed at 6 p.m. across Tacoma’s North End. You can view all of the Holiday Windows in Tacoma’s North End at: www.holidaywindows.org/windows and tour them yourself by using this handy map: www.holidaywindows.org/map. Photo from 4006 N. 35th St., Tacoma

MUSIC: Since the beginning of the pandemic, fellow bandmates Forest Beutel and Kevin Shintaku have been collaborating on a live streaming concert series, More Ducks More Fun. They’ve entertained with originals and covers, from Bill Monroe to Bill Withers and Tacey Chapman to Janis Joplin to Tom Waits. Tonight, they have “great music, hilarious anecdotes, and a beer review coming,” according to More Ducks More Fun hype. No doubt. Pair the show with Wingman Brewers Little Radio Lo-Fi Lager from the Peaks & Pints cooler. 6 p.m., Crawdad Holiday YouTube Channel

THEATER: There are those who believe that life here began out there, far across the universe, with tribes of humans who may have been the forefathers of the Egyptians, o the Toltecs, or the Mayans. Some believe that there may yet be brothers of man who even now fight to survive, somewhere beyond the heavens, somewhere in Spacies: The Secret Guardian. Spacies space serial follows Commander Rash Blasterbelt and Ensign Jock Junior, members of the Intergalactic Space Guardians, as they travel through the cosmos to defend the innocent. Tonight, they set off for a mysterious planet. What space shenanigans will they get into this time? Tune in to find out! Pair this space theater episode with StormBreaker Brewing Son of Jango from the Peaks & Pints cooler. 8 p.m., Tacoma Little Theatre Zoom