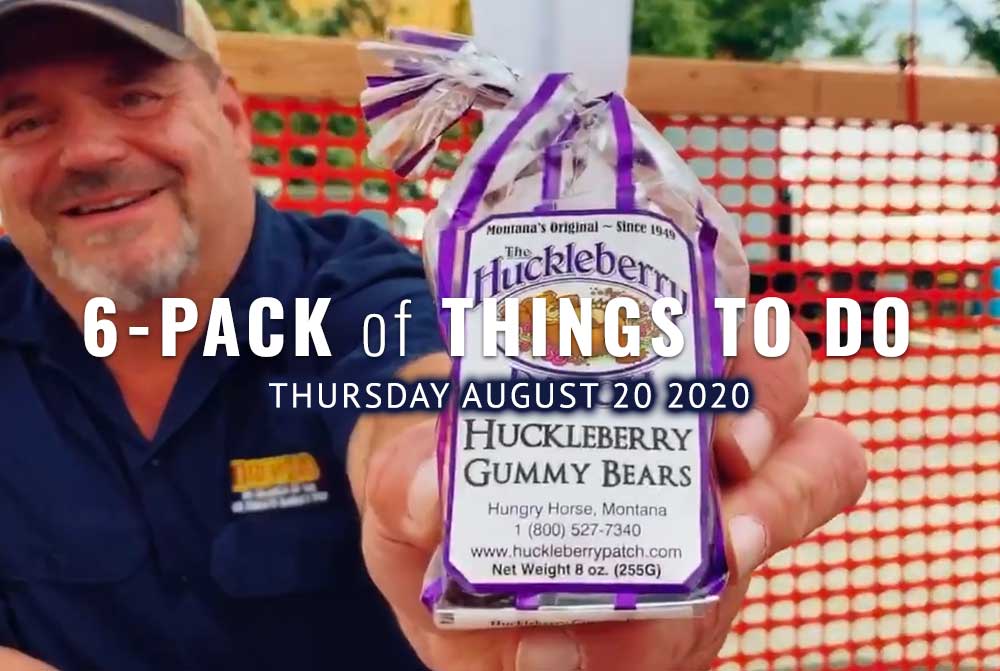 You can’t find any clean clothes this morning. Out of toothpaste. Out of orange juice. Shoelace broke. And, of course, you are late. How did this happen? How did life end up lacking … so … much … luster? Where is the action/adventure/drama? That’s where 6-Pack of Things To Do comes in. We got this!

RANDALL: Top Rung Brewing founder Casey Sobol is all about Lacey, Washington. It’s where his brewery resides — the only craft brewery in the city. He often responds to emergencies in Lacey, as he is also Thurston County firefighter. It’s no surprise he named his IPA, Shift Trade, as shift trades are a thing in the firefighting community. His sales executive Mike Besser isn’t a firefighter, but he drove through several fires on his way to Montana to grab Huckleberry Gummy Bears from the town of Hungry Horse. Today, Top Rung will run their fruity Shift Trade IPA through a Randall infusion of said gummy bears. Stop by and give it a try. 3-9 p.m., Top Rung Brewing, 8343 Hogum Bay Lane NE, Lacey

BEER FLIGHT: There was a day when Seattle’s Georgetown neighborhood wasn’t as hip. A neighborhood geographically disconnected from the rest of the city, Georgetown was populated mostly with dives and holes in the wall. And it was industrial ― a hub for trucking companies and design wholesalers with fossil fuels and train tracks thrown in. Seattleites already had hip and happening Belltown and Ballard; they weren’t about hang in Georgetown. But then something unexpected happened: big name culinary icons and established brands moved in to set up shop in Georgetown. The breweries followed, led by Georgetown Brewing. Today, among the vintage shops, music stores and first-rate comic book retailers, Georgetown is the home to notable craft breweries. Peaks and Pints salutes the neighborhood with a to-go flight of beers born there — a flight we call Peaks and Pints Pilot Program: Georgetown Neighborhood On the Fly. 11 a.m. to 8 p.m., Peaks & Pints, 3816 N. 26th St., Proctor District, Tacoma

STAIRS: It’s just one of those days. You’re 20 minutes late. You sprint to the Tacoma Link Light Rail. Drenched in sweat, cursing the fact that you did the friends’ patio circuit for the fifth night in a row, gasping for breath from the exorbitant amount of cigs you smoke on a daily basis: YES! Just in time. The Link rolls up as you collapse through the door. You silently scream to no one. The doors open and the University of Washington-Tacoma Grand Staircase stares you right in the face. You swear you’re bringing your running shoes tomorrow. 19th and Pacific Avenue, downtown Tacoma

MARKET DAY: Lettuce speak frankly. It’s really not especially green to buy certified organic food shipped from Chile or the Netherlands. It’s a start and better than buying the pesticide-drenched, plastic-tasting kind. Get up close and personal with your local produce purveyors at the Broadway Farmers Market. Visit the world’s most productive gardener, the farmer, and pick up a bunch of their “fruits of labor.” 10 a.m. to 3 p.m., 925 Broadway, Tacoma

BOOK: In our age of video games and short attention spans, why test your patience with a 1,400-page novel? Because we all need something to remind us of our essential humanity, that’s why. Leo Tolstoy’s War and Peace a historical epic, romance and war novel, and philosophical treatise all rolled into one Napoleonic canvas. It has a wrenching 100-page death scene, duels and tells us what it’s like to see a leg amputated from a man who tried to steal your girlfriend. On the bright side, it also teaches us what it means to love other people as human beings, not as the tools of some selfish happiness. In a famous hunting scene, Tolstoy even gets inside the mind and soul of a wolf. It’s the greatest novel ever written, you know. Order it from King’s Books and read part of it in every single Tacoma park.

MOVIE: From Two-time Academy Award-winning filmmaker, Barbara Kopple, Desert One tells the incredible tale of America’s secret mission to free the hostages of the 1979 Iranian revolution, which has been called “the most audacious, difficult, complicated, rescue mission ever attempted.” The Grand Cinema grabbed this documentary for their Virtual Screening Room. Stream it on your screens while drinking a Standard Brewing War Pig milk stout from the Peaks & Pints cooler. $12 movie