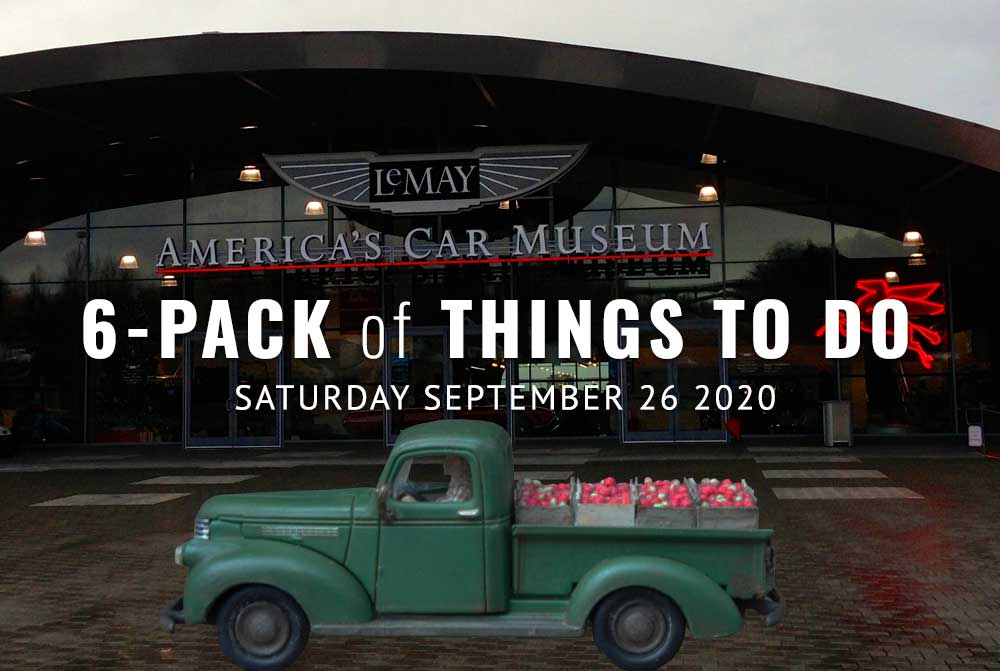 Welcome to the Saturday version of 6-Pack of Things To Do! Today, the annual Cider Swig goes home, last call for blueberries in Proctor, Fort from Home goes blacksmithing and more. …

PROCTOR FARMERS MARKET: Show up to the Proctor Farmers Market today sans grocery list and let the local, in-season produce tell you what’s for dinner. “We welcome fall with the coming new varieties of fresh, locally grown produce, fruits, and other farm and food goods that are unique to the season,” says Market Manager Karen Bowes. “Get blueberries while you can.” Who’s up for a lemon blueberry cornmeal cake? 9 a.m. to 2 p.m., Proctor District, North 27th Street and North Proctor

FORT NISQUALLY: John Simpkins has been a volunteer at Fort Nisqually Living History Museum for nearly 40 years. His hand-forged hardware can be found throughout the Fort and is literally keeping the Fort’s structures together. Today, Simpkins will demonstrate a unique and historical technique for forging a boot scraper — using stone, metal and fire — in the Fort from Home where you can enjoy the talents and expertise of Fort Nisqually interpreters to you live through interactive virtual programming. Join Simpkins online and ask him about live through interactive virtual programming. Join us tomorrow, live, to ask John about his background as a Fort Nisqually blacksmith, artisan, and longtime supporter. 11 a.m., Fort from Home

SYMPHONY TACOMA: The Symphony Tacoma offers another Encore Series concert, this time “Beyond The Silk Road Part II: Scheherazade” from the February 23, 2019 concert. This encore presentation will take you on the stage for a close-up view of the orchestra with video footage edited by Symphony Conductor Sarah Ioannides. Scheherazade is a symphonic suite that tells the captivating story of the Arabian Nights and illustrates Rimsky-Korsakov’s genius for orchestration and musical characterization. Pair the concert with North Coast Brewing‘s Old Rasputin Imperial Stout from the Peaks & Pints cooler. 7:30 p.m., Symphony Tacoma Youtube

MOVIE: For more than a century, Black artists, authors, musicians and others have traveled to Paris to liberate themselves from the racism of the United States. What made these African Americans choose France? Why were the French fascinated by the newcomers? And to what extent was and is France truly colorblind? Alan Govenar’s new documentary Myth of a Colorblind France investigates these questions and examines the ways that racism has plagued not only Blacks fleeing the United States, but Africans and people of color in France today. The Grand Cinema Virtual Screening Room, $10 movie