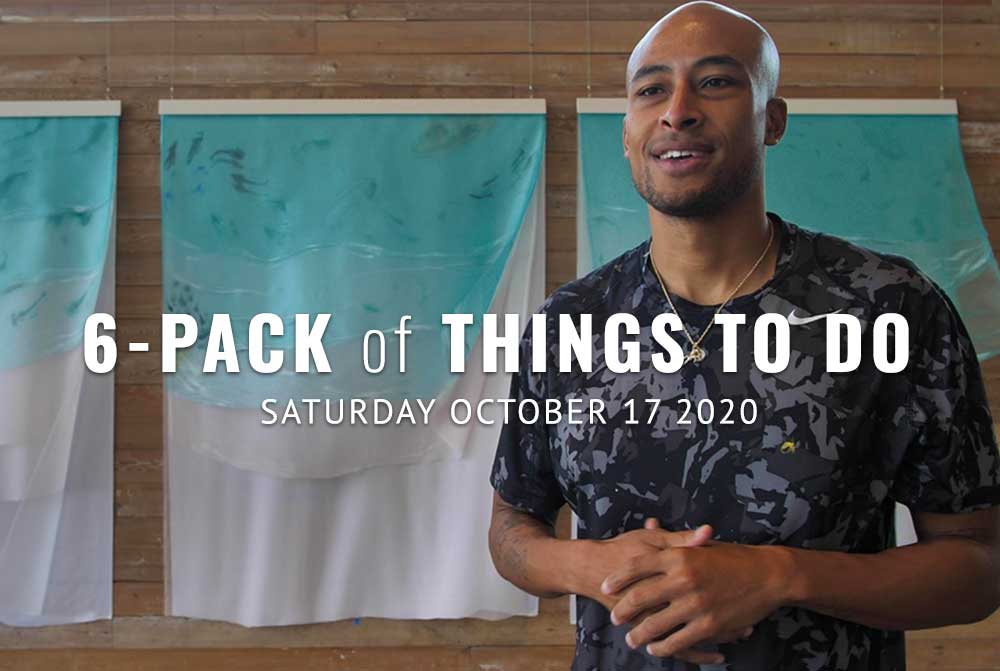 Today, for the first time since masks, Tacoma has a ton of events happening. 6-Pack of Things To Do highlights six, but there are more on the Tacoma Arts Month site. Yay Tacoma!

SEA WORTHIES: There are no azure crests and tepid tides, no bathing beauties reclining on sparkling sand, no barefoot strolls through the moonlit surf. Tacoma’s waterfront is a stern and hungry body of water, commanding respect and resolve as steely as its port. Today, Foss Waterway Seaport on Tacoma’s waterfront invites the public to see their Tacoma Ocean Art installations where you can meet the artists, watch live painting, listen to listen to electric cello by Gretchen Yanover, and explore the museum’s marine heritage, science and culture. 10 a.m. to 2 p.m., Foss Waterway Seaport, 705 Dock St., Tacoma, $8-$10, Lourdes Jackson‘s silky soft ocean organza mural photo courtesy of Facebook

BEER FLIGHT: Hitting the scene in the early 2010s, the New England style India pale ale came to fame thanks to a Vermont brewery, The Alchemist, with their Heady Topper, an unfiltered double IPA that became a cult favorite. The beer was a success, and other New England breweries followed suit: namely Hill Farmstead Brewery, also in Vermont, along with Trillium Brewing Company and Tree House Brewing Co., both in Massachusetts. Call them hazy, New England or Northeast style; they’re still all the rage. Even the Brewers Association recognizes the category for its competitions. Though loaded with hops, these small-batch brews tone down the bitterness by using milder varieties like Citra and Mosaic, and adding them late in the brewing process. Unfiltered, these beers are meant to be drank young and fresh. Today, Peaks and Pints offers a to-go flight of new hazy IPAs that we call Peaks and Pints Pilot Program: New Hazies On The Fly. 11 a.m. to 10 p.m., Peaks & Pints, 3816 N. 26th St., Basecamp Proctor, Tacoma

WAYZFARING: If you’re loyal 6 Things To Do Today reader, you might have noticed Peaks & Pints dedicated a few days to King’s Books’ revamped Wayzgoose letterpress celebration. The fact is: We’re Wayzgroupies. We’re veterans of many a Wayzgoose weekends. Anyway, today marks the last day of the Tacoma Wayzfaring Press: Letterpress Printing for the Pandemic, the weeklong letterpress exploration with guest artists creating prints in King’s front window. Today’s guest artists are Gloria Joy Muhammad and Saiyare Refaei. Check out their talents from the sidewalk in front of the bookstore. 11 a.m. to 4 p.m., King’s Books, 218 St Helens Ave., Tacoma

WHALE YOGA: The fact that fish stocks are depleted worldwide, that the bluefin tuna and the swordfish, et al, have been almost completely wiped out, hits at the heart, the soul of who we are as a species at a level words can’t quite access. What is to be done? Ponder this as you perform Whale Yoga, Thanks to the Tacoma Public Library. Learn a variety of poses from Rosie Townsend while listening to Rosemary Ponnekanti on double bass. People of all ages can enjoy an evening stretch while looking at beautiful artwork live-streamed from the Foss Waterway Seaport. 4:30 p.m., virtual yoga session, Tacoma Public Library Facebook Live, photo and streaming by Kris Crews

MOVIES: Academy-Award nominated filmmaker Leslie Iwerks, director of the critically-acclaimed docuseries, “The Imagineering Story,” happened upon a WIRED Magazine story about the fake news cottage industry in Macedonia. She was outraged and fascinated by it, Flew to Macedonia and filmed Selling Lies, a documentary about the websites the Macedonian teenagers created, and how disinformation campaigns are continuing to strongly impact the U.S. today leading into the 2020 elections. Check out the film in The Grand Cinema’s Virtual Screening Room. $12 movie