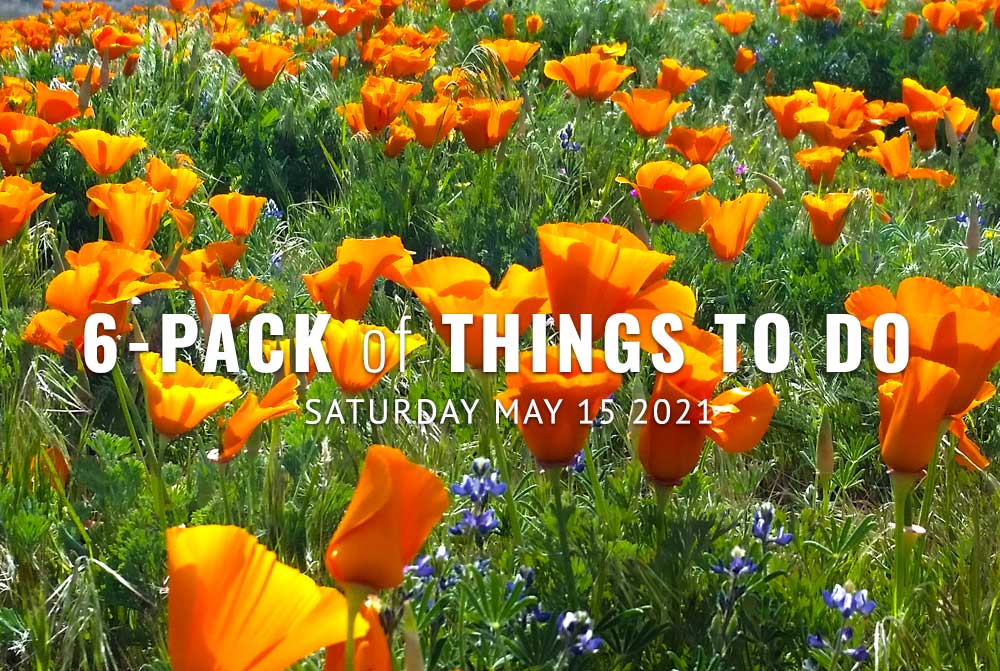 OK. Suddenly the state’s craft beer bar/bottle shop/restaurant scene is the Wild West. Here’s what will happen to you when you receive the vaccine: a sore arm, slightly achy overall, random bouts of deep sighing/relief coupled to spurts of awkward elation feeding into an urge to hug assorted healthcare workers and make out with cute nonviolent strangers. You’ll immediately want to book a trip to Lucca, Italy, but hell, Ocean Shores will do. Just tattoo your CDC proof of vaccination card on your forehead and partake in all the wonderful events in 6-Pack of Things To Do: Saturday May 15 2021. Also, barleywine at Rainer Growlers.

MARKET DAY: Another week, another farmers’ market, which is fine, because you can never have too much local, fresh produce. The Proctor Farmers Market is into its 10-month weekly run. Every Saturday through dec. 18, the market will be open from 9 a.m. to 2 p.m. with locally grown produce, pasture raised meats, wild caught seafood, cheeses, eggs, fruit, flowers, plants, and so much more. Word is the poppies are popping at the market today! 9 a.m. to 2 p.m., North 27th and Proctor, Tacoma, no cover, photo courtesy of Kevin Gill

BEER FLIGHT: Art Larrance was no stranger to the Oregon craft beer scene when he established Cascade Brewing in 1998. He partnered with Brewmaster Ron Gansberg, who oversaw the design and installation of the Portland brewhouse. Together, they took their more than 40 years of combined brewing experience to create fantastic sour beers inspired by an abundance of Oregon fruit. Each of their beers is then aged on wine barrels from the Northwestern Oregon region. In April 2020, Larrance sold Cascade Brewing to a team that owns and operates FlyBoy Brewery in Tigard and Lake Oswego. Mark Becker, Ramie Mount, Brian Kovach and Greg Laird now steer one of the pioneers of the sour beer movement. Today, Peaks & Pints presents a to-go flight of recently released Cascade beers — a flight we’re calling Peaks and Pints Pilot Program: Cascade Brewing On the Fly. 11 a.m. to 11 p.m., 3816 N. 26th St., Basecamp Proctor, Tacoma

ART: Gabe Feenan began his glass career in the 1990s, working in production studios in the San Francisco Bay area. Elegant and refined, Feenan’s pieces evoke strength and balance with their stacked geometric shapes. He has been a resident gaffer at the Museum of Glass since 2002 and, in fact, will be in MOG’s Hot Shop today doing a technique demonstration on murrine. Murrine is the Italian term for patterns or images made in glass cane (long rods of glass) made in a glass cane that are revealed when the cane is cut into thin cross-sections. 10 a.m. to 5 p.m., 1801 Dock St., Tacoma, $5-$17

FILM: Deep in the forests of Piedmont, Italy, a handful of men, 70 or 80 years old, hunt for the rare and expensive white Alba truffle, which to date has resisted all of modern science’s efforts at cultivation. This ritual has been, well, documented by Michael Dweck and Gregory Kershaw in their documentary, The Truffle Hunters, screening inside The Grand Cinema. You will be particularly overjoyed to spend time with Birba, Nina, Fiona, Charlie, Yara, Vasco and Leo — the truffle hounds — and their elderly masters, as they hunt the forests of northern Italy for everyone’s favorite subterranean fungus. 2:30, 5:15 and 7:30 p.m., 606 S. Fawcett, Tacoma, $6.50-$11

COMEDY: In March 2020, comedian Chad Daniels was preparing for a weekend run of dates at the Tacoma Comedy Club when the pandemic shut down the club. He returned home to Fergus Falls, Minnesota. Daniels is back and ready to show why he is the most listened to comedian with 750 million streams of his five albums to date. 9:30 p.m., 933 Market St., Tacoma, $22-$30