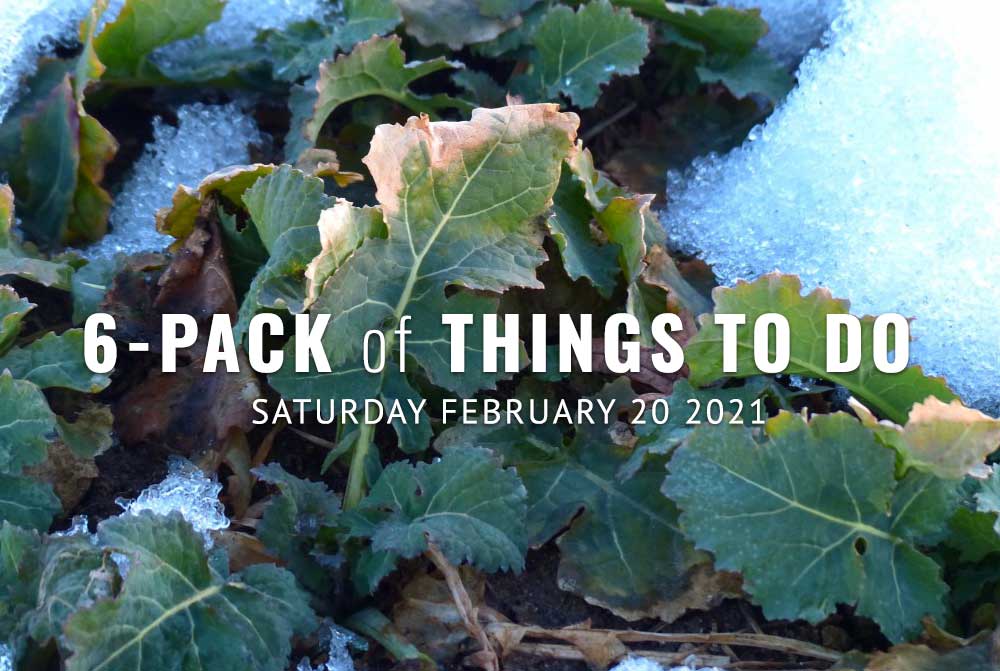 Tomorrow is the last day to nominate your favorite Northwest double IPA for the Peaks & Pints Tournament of Beer: NW Double IPAs in April 2021. Now, onto a 6-Pack of Things To Do today. Cheers!

ZOO: Proctor Farmers Market wasn’t the only event canceled due to the snow. Originally planned for Feb. 13-15, Point Defiance Zoo & Aquarium Love at the Zoo is on for this weekend. Hunt for 12 giant hearts hidden around the zoo. Find each one and follow its code to discover fun facts and lovable stories about each of the 12 animals highlighted. Feel the love as Zoo animals enjoy special Valentine’s enrichments. Online timed tickets required for Zoo admission (limited capacity). 9 a.m. to 4 p.m., 5400 N. Pearl St., Tacoma, $14-18 reservations here

BEER FLIGHT: Rejoice, o cherry pie lovers of the South Sound! Today, February 20, is National Cherry Pie Day! Why February 20? Why not the infinitely more logical March 14? (3.14 = Pi = Pie.) Why the hell not? Especially during this month of cold and gloom. Ok, so it’s not like you had this holiday on your calendar, but maybe you should as Peaks & Pints carries many cherry-flavored beer, cider and meads. See what we did there? Cherries can balance otherwise heavy beers or add extra freshness and flavor to the lighter styles. Cherries have been added to beer for centuries, especially with Belgian lambic styles, which are called krieks. Cherry beer is no longer a throwback to centuries past. North American brewers are adding cherries to their craft, whether it’s a kriek, or another beer style infused with the finest cherries. In celebration of National Cherry Pie Day, Peaks & Pints presents a to-go flight of cherry beer that we call Peaks and Pints Pilot Program: Cherry On The Fly. 11 a.m. to 10 p.m., 3816 N. 26th St., Basecamp Proctor, Tacoma

LECTURE: Your father does it. Peaks & Pints does it. News anchors accidentally do it. Confound it! The ancient Greeks certainly did it. You know the Greeks let out a four-letter word when their togas blew open in the wind. Cursing is perhaps the only vice that’s as taboo as prevalent. The Puget Sound Society of the Archaeological Institute of America presents Deborah Kamen of University of Washington. Her talk titled, “Insults in Classical Athens,’ will explore the social implications of personally offensive speech in an ancient democratic community. Pair the lecture with Single Hill Brewing‘s Public Knowledge IPA from the Peaks & Pints cooler. 2-3:45 p.m., University of Puget sound Zoom, free

THEATER: Tacoma Arts Live hosts the University of Washington-Tacoma’s presentation of The Book of Andy, a look at modern dating through the eyes of a gay man who is suddenly hit with the intensity and surprise of marriage. After Andy gives a vague response to a marriage proposal, as lies says he’s dying. Playwright Michael Mejia has written a funny, touching, and honest play that will have you laughing in the Zoom room. 7 p.m., Tacoma Arts Live Zoom Room, free, but registration required

MOVIE: Sept. 18, 2020, amid what was already a smoldering political landscape, the nation received the sad and long-dreaded news that Supreme Court Justice Ruth Bader Ginsburg, aged 87, had died, a victim of recurrent pancreatic cancer. Justice Ginsburg, who had been the leading liberal light on the Court, leaves behind a tribunal dominated by conservative jurists, and speculation inevitably ensued as to what comes next. The Grand Cinema will screen Ruth: Justice Ginsburg in Her Own Words in their Virtual Screening Room. This new documentary tells the improbable story of how Ginsburg, who couldn’t get a job despite graduating first in her law school class in a tie and making Law Review at Harvard and Columbia Law Schools, became an Associate Justice of the Supreme Court. $12, photo courtesy of Kino Marquee