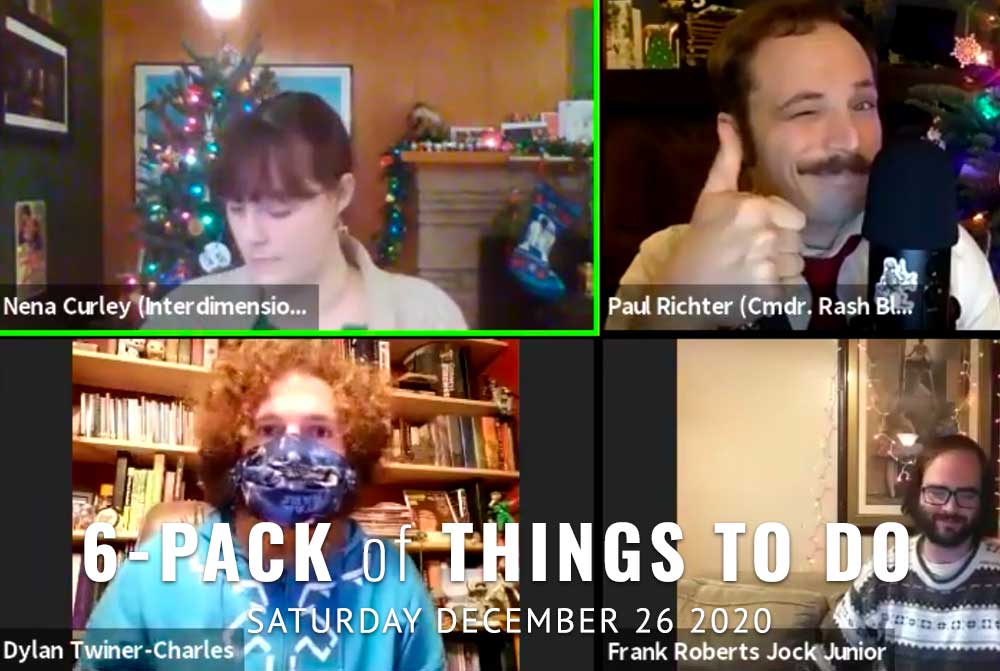 Happy holiday 6-Pack of Things To Do of your choice, or all or none of them — just please stay safe, friends.

THEATER: The holidays are intended to incite love, merriment and cheer. But with celebrations of Baby Jesus’ birth beginning months in advance, Tacoma Little Theatre understands that the season’s overextension can instead provoke something else entirely. That must be why the company has left its Christmas Eve production of Spacies available to view. The last episode of the year, the space-themed series follows Commander Rash Blasterbelt and Ensign Jock Junior on a holiday-themed adventure. What exactly is an Interdimensional Santa Claus? Grab a Fortside Brewing Nerd Immunity from the Peaks & Pints cooler and tune in. Tacoma Little Theater Space Zoom

BEER FLIGHT: Today is Dec. 26 — what Brits call Boxing Day. Sure, after Christmas you might want to strap on gloves and settle those unresolved familial scores, but Boxing Day isn’t about pugilism. And it has nothing to do with boxing up decorations or gifts you wish you didn’t get. Instead, the national holiday harks back to a bygone era like powdered wigs and pagers. Back in the days of the Empire, British citizens were split into hierarchies divided by arbitrary lines such as accent and lineage. Think Downton Abbey, in which the bottom floor of a huge house split two worlds. Upstairs you have the lords and ladies. Downstairs you have the servants and maids, who rarely get breaks. If it weren’t for the servants’ work on holidays, the aristocrats might have gone hungry, practically unable to cook their own food or even pour tea. And for their year-round fealty, tradesmen get little gifts called Christmas boxes — plus Dec. 26 off to spend with their families. Nowadays, Boxing Day is a chance to give tiny thanks to modern-day tradesmen such as postal workers, paper boys, and state employees, as well as time for soccer and rugby. Boxing Day is mostly a Commonwealth tradition, with the likes of Canada, Australia and New Zealand celebrating the day just like in the UK. But in the States, it’s just another chance to drown that Christmas hangover all over again. Peaks & Pints presents a to-go beer flight from Boxing Day observing countries. 11 a.m. to 8 p.m., 3816 N. 26th St., Basecamp Proctor, Tacoma

WALKING TOUR: In 1889, Thea Foss founded a rowboat service in Tacoma that later grew to become Foss Maritime, the largest tug and towing operation on the West Coast. Thea Foss’s name lives on as the Thea Foss Waterway, which can be viewed from the Museum of Glass, several condominium complexes, a couple parks and an assortment of marinas. Explore the outdoor art and architecture of Museum of Glass, the Chihuly Bridge of Glass, and Thea Foss Waterway with the Museum of Glass’ education staff. The walking tour will last about 45 minutes and will include little-known facts about the art and architecture along the waterway. 11 a.m., 1 and 3 p.m., Museum of Glass Store, 1801 Dock St, Tacoma, reserve your spot here, $10

VIRTUAL TOUR: Fort Nisqually Living History Museum offers a virtual tour of its Factor’s House through January. Decked out for Christmas, the Factor House is one of the site’s two original buildings, built in 1855. It housed the manager of the fur trade and agricultural operations headquartered at Fort Nisqually, owned by the British Hudson’s Bay Company. Dr. William Fraser Tolmie lived with his family in the house when it was first completed. After they left, his chief clerk Edward Huggins lived there with his family, eventually selling the house and land to the DuPont Powder Manufacturing Company in 1906. View the house in 3-D and learn details about historical objects and museum collections. Walk room to room while listening to music from Fort Nisqually’s talented volunteer musicians. Fort Nisqually Zoom House, $6 here

FILM: Throughout the duration of The Grand Cinema‘s closure, the Tacoma film house continues to offer curated virtual screenings to entertain and engage you. Today, The Grand opens up for popcorn once more this year because “we are floored by your support at the previous Popcorn Pick Ups.” Swing by Peaks & Pints for a Campfire Crowler fill of one of our draft craft beers or ciders, stop at The Grand between 3-6 p.m. for popcorn, then screen a movie in The Grand Virtual Screening Room. 3-6 p.m., Popcorn Pick Up, 606 Fawcett Ave., Tacoma, $5-$7