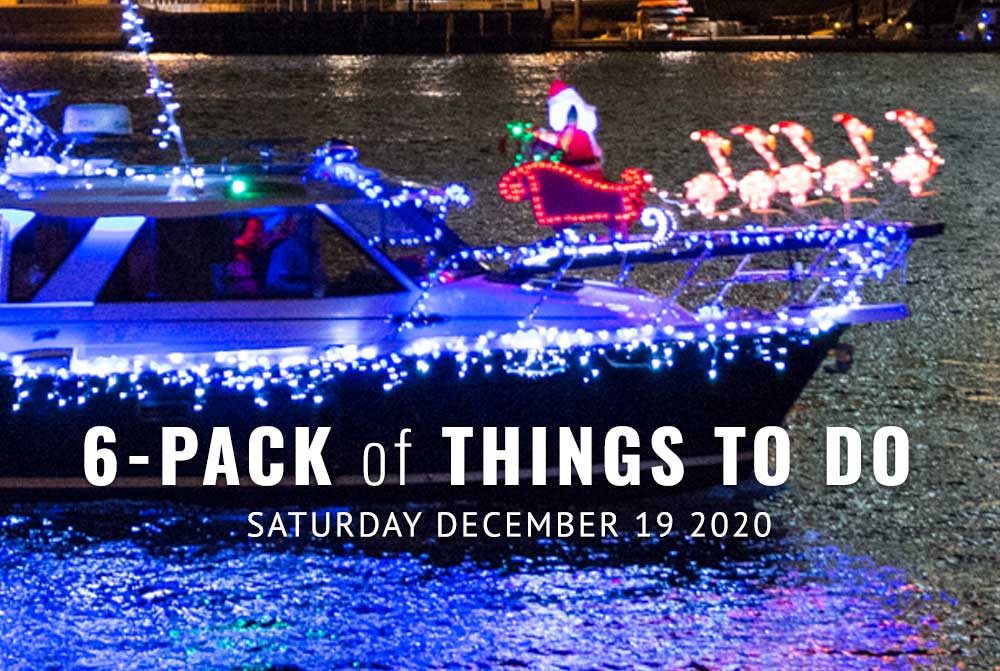 Feeling disenchanted this holiday season? Well, there’s a holiday for that. A Festivus for the Rest of Us, created by Seinfeld character Frank Costanza who thought the holidays became to be too much: too much buying, too much stress, too much glitz. Costanza’s Festivus holiday included a Festivus pole, feats of strength and the ritual airing of grievances. What other holidays take place during this time of year? 6-Pack of Things To Do knows. …

LIGHTED BOATUS: Wake up a 10 a.m. Watch A Christmas Cruise with Vivica A. Fox three times. Talk anti-fouling paint and jerry-rigging with yacht salespeople on Dock Street until they want to kill you. Hit the free Tacoma Yacht Club’s Lighted Boat Parade along the Ruston Way waterfront at 5:30 p.m. Drop by Peaks & Pints for the holiday beer flight that we call Peaks and Pints To-Go Christmas Beer Flight: Amateur Dentists. Crack open the holiday beers and re-decorate your tree with a boat theme. Photo courtesy of Patrick Gillespie

METRO PARKS PRETENDUS: Admit the biggest damper on holiday cheer is your adulthood. Banish grown-ups. Confess you enjoy Dippin’ Dots. Jump on Metro Parks Tacoma’s Art – Video On Demand and learn about the element of value. You will be creating our own value ice cream cone. Make a fort in your living room. Catch with friends on iCarly Chatroom. Fall asleep to Shake It Up.

GRITTY DICKENSUS: Wake up at 6 a.m. Go riding, shooting and fishing. Inspect your small‐game traps. Then head back to your country house for breakfast of cold hams, venison pies, ham and eggs, kippers, and Easterhedge pudding. Drop by Peaks & Pints for today’s holiday beer flight Peaks and Pints To-Go Christmas Beer Flight: Amateur Dentists. At noon, crack open the first beer and jump on Pretty Gritty Tours’ Youtube for the virtual 16th annual Dickens Festival in the Stadium District. For two hours, travel through 16 years of a holiday festival with memories from past performances and a tour of Stadium’s historic businesses. Watch several episodes of Ripper Street then to bed early as you’ll rise early to check the traps.

LIGHTED CAR PARADEUS: Turn on the oven. Tune in KZOK. Cook a burrito. At 11 a.m. start your bike ride to the 4:30 p.m. Gig Harbor Lighted Car Parade. Zone out on the lights. Hitch a ride back home in one of the decorated trucks. Plop a needle on your Woodstock album and go to town on your Lite-Brite. Think about dropping out, but instead play Angry Birds on your phone.

COMMUNITY UNITUS: Wake up at 8 a.m. and re-organize your food pantry. Load up some non-perishables and drop them off at Narrows Brewing — one of the local breweries participating in the Hoppy Holiday Food Drive. Watch Black Panther and watch his Wakanda community decide to end its isolation, grow beyond itself, and work to make the rest of the world a better place. Drop by Peaks & Pints for the Peaks and Pints To-Go Christmas Beer Flight: Amateur Dentists. At 7:30 p.m. jump on tacomalittletheatre.com and watch the theater company’s virtual reading of Hanukkah Lights in the Big Sky, a true story that occurred in Billings, Montana in 1993. When a brick is thrown at a menorah set in a child’s window for Hanukkah, community leaders of all faiths come together to help spread a message of tolerance and peace. With the help of school children, 10,000 families display menorahs in their windows for Christmas in solidarity. Save the last bottle in the beer flight for your late-night Facebook messages to all your friends.

SINFONIETTA ROADIEM: Wake up a noon. Watch Spinal Tap three times. Talk replacing heads and sandbagging hardware with the employees at Guitar Maniacs until they want to kill you. Buy your Northwest Sinfonietta – Baroque in Your Living Room tickets. At 7:30 p.m., enjoy the grand and masterful Brandenburg Concerto No. 1 to your living room, along with festive works of Vivaldi and Handel. Northwest Sinfonietta Concertmaster Denise Dillenbeck will perform the Winter Concerto from Vivaldi’s iconic Four Seasons. Stay up until 4 a.m.