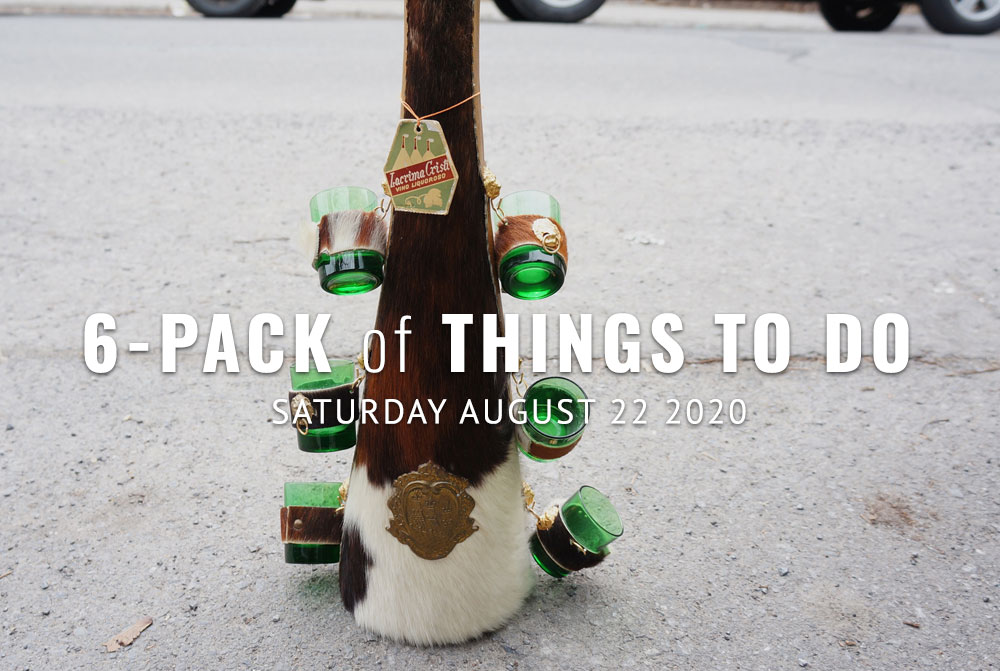 What are you doing today? NOT ANYMORE. Peaks & Pints is giving you a 6-Pack of Things To Do. Because guess what? We love you.

NEIGHBORHOOD PARTY: Hilltop Tacoma has taken a few hits. The Link Light Rail construction made parking difficult. COVID-19 made parking not a thing. Let’s mask up and descend on the historic district. In lieu of the annual street fair, three organizations — Hilltop Action Coalition, Tacoma Housing Authority, and The Community Market — invite you to join in on the Hilltop Business Crawl. Today and tomorrow, you’ll receive a stamp in a Hilltop Business Crawl Passport for every one of the 16 Hilltop businesses you visit. Your first stop should be the office of the Hilltop Action Coaltion at 1116 Earnest S. Brazil St., where you can retrieve your “passport” for the weekend. At the end of your explorative crawl, take a moment to vote for a People’s Choice Award and be sure to submit your passport to be entered for raffle prizes.

BEER FLIGHT: As temps dropped and rain settled over Tacoma yesterday, autumn felt like it was peaking its head through the clouds. With the rain, a certain beer flavor peculiar to America also arrived: Pumpkin beers have descended like a Yankee Candle. It seems early, but Peaks & Pints says that every year. Beer made with pumpkin have officially become mainstream, with nearly every brewery worth its yeast churning out bottles and kegs packed with pumpkin, nutmeg, ginger and more. Peaks and Pints has enough pumpkin in the cooler to make it a thing. We present a to-go flight of pumpkin beers that we call Peaks and Pints Pilot Program: Pumpkins On the Fly. 11 a.m. to 8 p.m., Peaks and Pints, 3816 N. 26th St., Proctor District, Tacoma

TACOMA TRAILS: It has it all — giant ass lawn for Frisbee, playgrounds, beaches —but more than anything else, Point Defiance Park is made up of spectacular old-growth forest. Of the park’s 760 acres, the vast majority are forested, with paved and unpaved trails weaving through the trees. Point Defiance Park’s trails tend to be crowded on weekends and in the morning so a good strategy to keep your distance is to check out trails at other parks throughout town. From the longer trails at McKinley Park, Titlow Park and Swan Creek Park to shorter trails and paths at Manitou Park, Wapato Park and Puget Park, there is something for everyone to discover and enjoy. Check out Metro Parks Trail Finder.

FOOTGOLF: Golf is an infuriating sport, that’s why Peaks & Pints has switched to FootGolf — a golf-style game that’s not a sequel to the derp-filled fest that was the movie BASEketball. In the vein of disc golf, it replaces the tiny white ball and bag of expensive clubs with a soccer ball and our good kicking legs. Meadow Park Golf Course on the edge of Lakewood has an 18-hole FootGolf course with tee boxes, green bunkers, hazards and 21-inch diameter cups. The game scores just like a regular round of golf on stroke play and each full kick counts as one swing. Putting works the same way except our legs has to make a full motion no matter how close it is to the hole. Basically, if you can kick a golf ball in a fit of spittle-filled rage, you can easily pick up FootGolf. Peaks & Pints, on the other hand, utter more curse words than an episode of Veep. Meadow Park Golf Course, 7108 Lakewood Dr. W., Tacoma, 253.473.3033, photo courtesy of Meadow Park

DRIVE-IN MOVIE: Did you miss Central Co-Op’s Pop-Up Drive-In Movie screen of The Goonies last week? You can catch the film tonight at the Washington State Fairgrounds. The Fair has partnered with the Puyallup Food Bank for a free presentation of the beloved ’80s flick with a suggested food donation. For those living in a sea-cave, Goonies tells the action-packed story of rambunctious urchins (including Sean Astin, Corey Feldman, and Jeff “Chunk” Cohen) who discover a pirate treasure map and vow to save their homes from greedy developers. However, also competing for the pirate’s booty is a gang of creepy gangsters, who are intent on stopping the smart-assy kids — using any means necessary! 9 p.m., lot opens at 7:30 p.m., Blue Parking Lot, Meridian Street South and 10th Avenue Southeast, Puyallup, free, food donations please