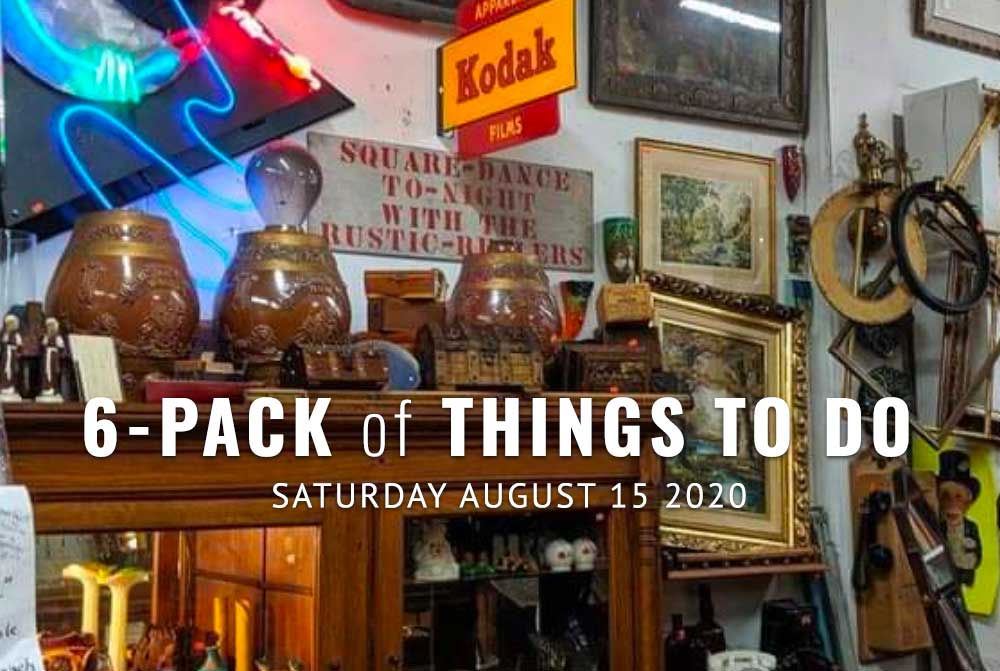 These are strange and challenging times. But we still have plenty to celebrate. Let’s do so as we work to build a better and more just future together. Enjoy 6-Pack of Things To Do: Saturday August 2020. Cheers!

SMALL SIDEWALK SALE: What may appear to be a mild-mannered store offering auctions and antiques seems to be hiding a little secret from you as Sanford & Son opens up to hallways and floors of good stuff. Actually, the Middle Floor Merchants aren’t so secret, with the bubble-gum-bright walls and signs on the Commerce level proclaiming some of the wonders you’ll find within. In 2005, Cheryl and Alan Gorsuch conceived the idea of creating a gallerialike space, the sort they often see when traveling in Europe on antique hunting trips. They began the process of converting the middle area of their sprawling establishment but was stalled by the creation of Tacoma’s scariest haunted house ever. Flash forward many years to this weekend, Sanford & Son and the Middle Floor Merchants will host a socially distanced sidewalk sale. Satisfy the kiddo in you with some classic toys and comics from Lily Pad Antiques, explore Sanford and Son’s three floors including 20 Middle Floor Merchants and The Library event space, cruise down to OCD candy for a sweet treat, then nicely round out your visit with a new-to-you slightly used stylish outfit from Anew Thyme. There’s something for everyone and even a few spots to grab a beverage (we’ll let you decide) on the way. Noon to 5 p.m., 743 Broadway, Tacoma

BEER FLIGHT: It’s hot, darn hot. And when it gets this hot, there isn’t much to do. You can’t seek out the closest movie theater for the afternoon show and hide in the darkness like a vampire. You can’t book a flight to Antarctica. But, you can float down a river. There are very few summertime diversions as splendid and spectacular as tubing: a voyage that takes you down a sometimes robust and rocky waterway that, at other bends and stretches, slows to a sluggish pace that allows you to examine the leaves in the trees above or the discarded masks on the riverbank. Add to this a beer — a cold, refreshing, buzz-inducing beverage — and you have perhaps the most perfect way to while away a languorous day. Peaks and Pints presents a to-go beer flight for floating, chilling and relaxing. Our to-go flight isn’t based on styles or ABVs, but rather what’s depicted on the beer’s package. No, you go float in a river! We think Peaks and Pints Pilot Program: Chillaxin’ Beers On The Fly is a fun idea. 11 a.m. to 8 p.m., Peaks & Pints, 3816 N. 26th St., Proctor District, Tacoma

HISTORICAL HAMMERS: Lincoln Hardware has been a Tacoma staple for more than 90 years! You heard us, 90 years. Inside you can find all of your home improvement needs, from the tiny bits, like nails and washers, to the bigger needs, such as gardening necessities and paint project accessories. Sadly, the third generation owners will close the store at the end of September. You need to read News Tribune columnist Matt Discoll’s “Lincoln Hardware, an iconic Tacoma mom-and-pop, will soon close its doors for good,” as well as Tacoma Tales’ “Ode To Lincoln Hardware,” then get your butt in there so say your goodbyes. 8:30 a.m. to 5:30 p.m., 3726 S. G St., Tacoma

SYMPHONY: We weren’t around in 1946 when volunteer musicians from the University of Puget Sound formed the Tacoma Symphony, but we do remember when Harvey Felder lead the symphony to professional status in 1993. In 2014, music director Sarah Ioannides broke the barrier to lead the Tacoma’s professional orchestra. Two years later, the Tacoma Symphony became Symphony Tacoma, leading the way for many local art name changes. Then, in March 2020, every symphony member drove their families to hide in the garage with headphones. They’ll eventually be able to practice in a concert hall, but until then enjoy Symphony Tacoma’s premiere of their Encore Series rebroadcasting the score of their February 2015 performance of Brahms & Dvorak, featuring violinist Vadim Gluzman and Symphony Tacoma Voices. 7:30-9:30 p.m., Symphony Tacoma YouTube

MOVIE: Filmed at the 1958 Newport Jazz Festival and directed by world-renowned photographer Bert Stern, Jazz on a Summer’s Day features intimate performances by an all-star line-up of musical legends including Louis Armstrong, Thelonious Monk, Gerry Mulligan, Anita O’Day, Chuck Berry, Dinah Washington, and closes with a beautiful rendition of “The Lord’s Prayer” by Mahalia Jackson at midnight to usher in Sunday morning. The film has been beautifully and extensively restored in 4K from the best surviving vault elements by IndieCollect and made available to screen in The Grand Cinema’s Virtual Screening Room. $12 movie

SOCCER: Tacoma Defiance (2-3-1, 7 pts) has turned heads around the league by storming out of the gates since the restart of the regular season with just one loss from four matches after opening the year with two consecutive home defeats. Tonight, they take on Sacramento Republic FC (3-1-3, 12 pts) at Papa Murphy’s Pizza Store on Fourth Street — no, wait, that’s Papa Murphy’s Park in Sacramento. 8 p.m., ESPN+