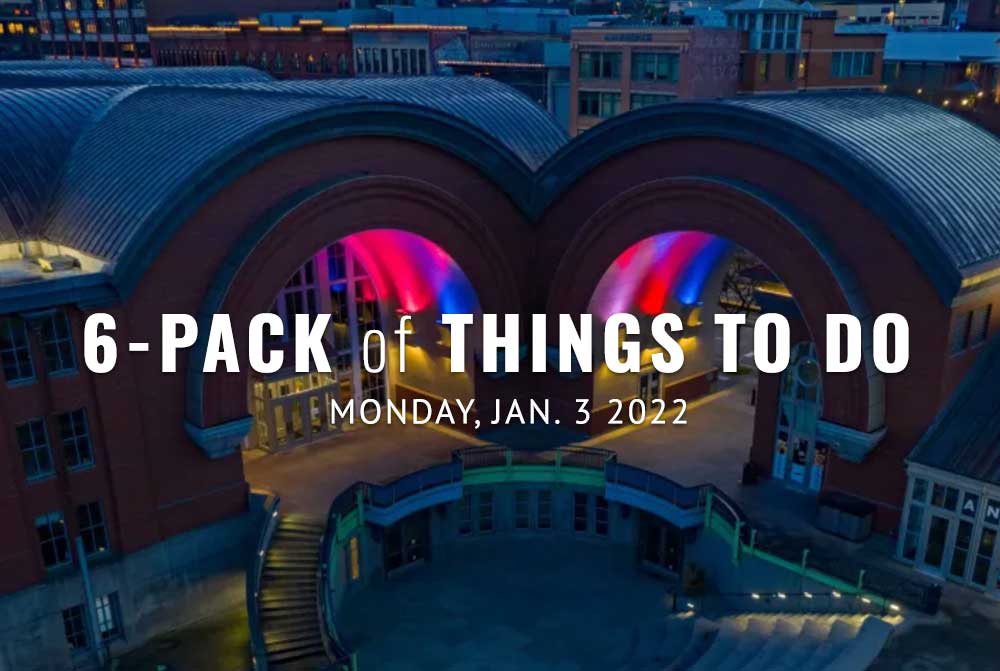 As always, Peaks & Pints cares that you stay on top of things. That you have the latest info, the skinny, the 411. Or something. What we’re trying to say, in a circular fashion, is that 6-Pack of Things To Do is back posting Monday, Wednesday, and Friday. So, without much further ado — or any chronological sensibility — here is 6-Pack of Things To Do: Monday January 3 2022 in Pierce County today and tomorrow. Excelsior!

TACOMA LIGHT TRAIL: The Tacoma Light Trail is exactly that: a walking or driving trail around Tacoma’s downtown to see light art. The art – which ranges from projection mapping to video, illuminated sculpture and sheer blasts of light – is visible from the street in more than 50 locations through Jan. 24. An accompanying Sound Trail pairs local music, poetry, or sound with each light location on the Echoes mobile app. Tonight, we suggest you start your walk at the Washington State History Museum to take in the towering front archway in a blast of colored light. The diversity of colors echoes the work ongoing inside the museum, both in-person and online, to examine and highlight the history of all Washingtonians, especially those marginalized by history. Click the accompanying “Sound Trail” on the Tacoma Light Trail website to hear an oral history from the museum’s Step Into My Shoes exhibit: Ingrid Hansen (Alutiiq/Alaska native) tells the story of her childhood, living seasonally between Washington and Alaska in the 1960s. 5-9 p.m. daily through Jan. 24, downtown Tacoma

CIDER FLIGHT: Newtopia Cyder co-founder and ciderist Rick Moreno got his start in the industry as co-owner of beer bar Toronado in Seattle. Cyder, the old English spelling, is co-owned by his wife, Jennifer Hays Moreno, who met Rick while working in the health care industry. The San Diego cidery sources apples and other fruits in nearby Julian and Temecula, and as far away as Santa Cruz, Hood River and Yakima. Rick developed his cider chops in his garage, then apprenticed with Newtopia’s “master cyderist,” Rusty Figgens, a member of the family that founded Washington’s famed Leonetti Cellar, who also knows his way around a distillery. Today, Peaks & Pints suggests you try two Newtopia ciders in our weekly Monday cider flight. 11 a.m. to 10 p.m., Monday, Jan. 3, 3816 N. 26th St., Basecamp Proctor, Tacoma