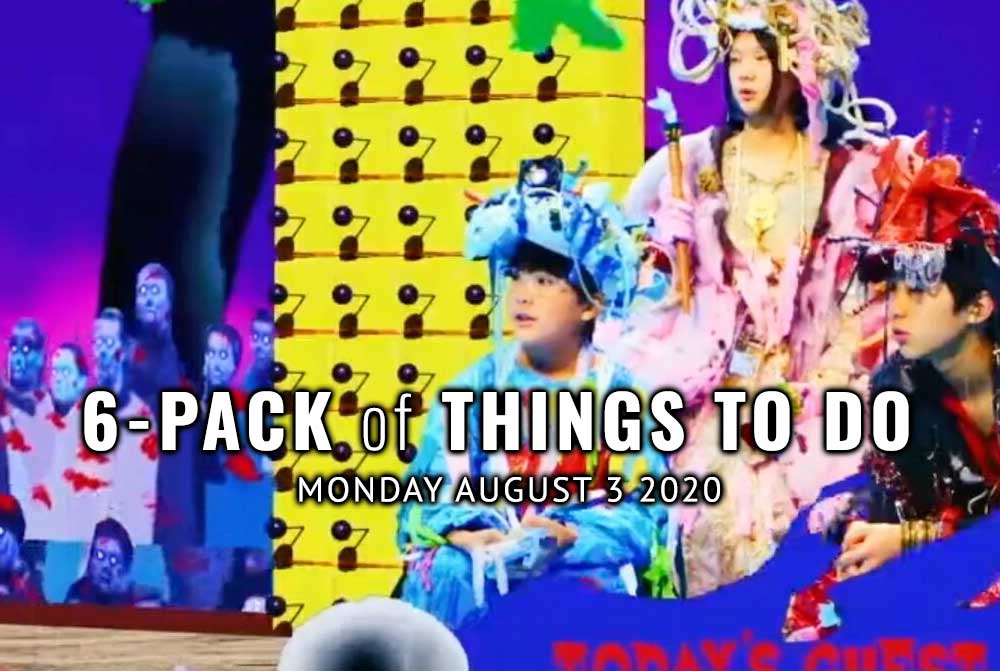 There are six things you can do in the South Sound today, a couple without even leaving your couch. Welcome to 6-Pack of Things To Do: Monday August 3 2020!

MOVIE: Four young orphans — Hikari, Ikuko, Ishi, and Takemura — meet cute at the crematorium. They just watched their parents turned to dust. With no family, no future, no dreams, and no way to move forward, the young teens decide that the first level of this new existence involves salvaging a gaming console, an old electric bass, and a charred wok from their former homes — just enough to start a band-and then conquer the world. Tragedy, comedy, music, social criticism, and teenage angst are all subsumed in this eccentric cinematic tsunamic by Makoto Nagahisa. Stream We Are Little Zombies in The Grand Cinema’s Virtual Screening Room. $12 movie

CIDER FLIGHT: Major League Baseball is finally back. Though the season has been condensed to a slim 60 games, teams will be staying within their regions for both home and away games, and there aren’t sentient fans in the stands (those cardboard cutouts are trippy though, aren’t they?), we’re just glad to have pro ball back at all this year. The Seattle Mariners and Oakland Athletics close out their four-game series at T-Mobile Park in a head-to-head showdown tonight. Right-handed pitcher Frankie Montas is expected to get the start for the A’s in a dual against Mariners lefty Justus Sheffield. Since Peaks & Pints offers to-go cider flights every Monday, we’d thought we pair tonight’s Mariners game with local, crushable Incline Cider cans. Since 2015, the Zehner family has made delicious, crushable cider, many from a dry-hopped apple base to pull out citrus aromas. They use 100 percent fresh pressed apples, no added sugar, no carbonated water, and the result are ciders that are balanced, not too sweet and super flavorful. Stop by Peaks and Pints and grab Peaks and Pints Pilot Program: Incline Cider On the Fly — four Incline Ciders for the game. 11 a.m. to 8 p.m., Peaks & Pints, 3816 N. 26th St., Proctor District, Tacoma

EXPLORE: Harbor WildWatch is environmental education organization dedicated to inspiring stewardship for Puget Sound and the greater Salish Sea based at the Skansie Visitor & Interpretive Center in downtown Gig Harbor. Moon snails, crabs, sea stars and other creatures are ignoring the pandemic. Therefore, Harbor WildWatch points a camera their way capturing their lives via Facebook Live. They’ll be visiting different beaches throughout the summer, some of which we’ve never explored before; others that are familiar favorites. Tune in live at 11:30 a.m., or catch the video afterward on YouTube. 11:30 a.m., Harbor WildWatch Facebook

CHRISTMAS IN JULY: Right about now is when the heat becomes too much and we begin dreaming of a white Christmas to come and cool us all down. So what better way to mark that there are 21 shopping weeks left until Dec. 25 than with Rainier Growlers’ Christmas In July. It’s true. They’ve invited Fremont Brewing and other breweries to slide down their chimney and spread good will and great craft beer to all the good girls and boys, 21 and older of course, while we play holiday music and pouring jolly bourbon barrel stouts and winter ales. Noon to 9 p.m., through Aug. 4, Rainier Growlers, 13105 Meridian E., South Hill Puyallup

TOUR TACOMA: Invite your friends over to your apartment (it helps if you live at the Casablanca Apartments and your friends have never been on any sort of tour of the building). Get them a wee bit drunk on Fremont Brewing Night Flying IPA from the Peaks & Pints cooler (not overly intoxicated but just enough to be a smidge more than a buzz), blindfold them, lead them down your back steps to the catacombs, spin them around three to seven times, and then remove the blindfold and make them attempt to find their way back up to your apartment. Trust us. Casablanca Apartments, 720 N. 2nd St., Tacoma