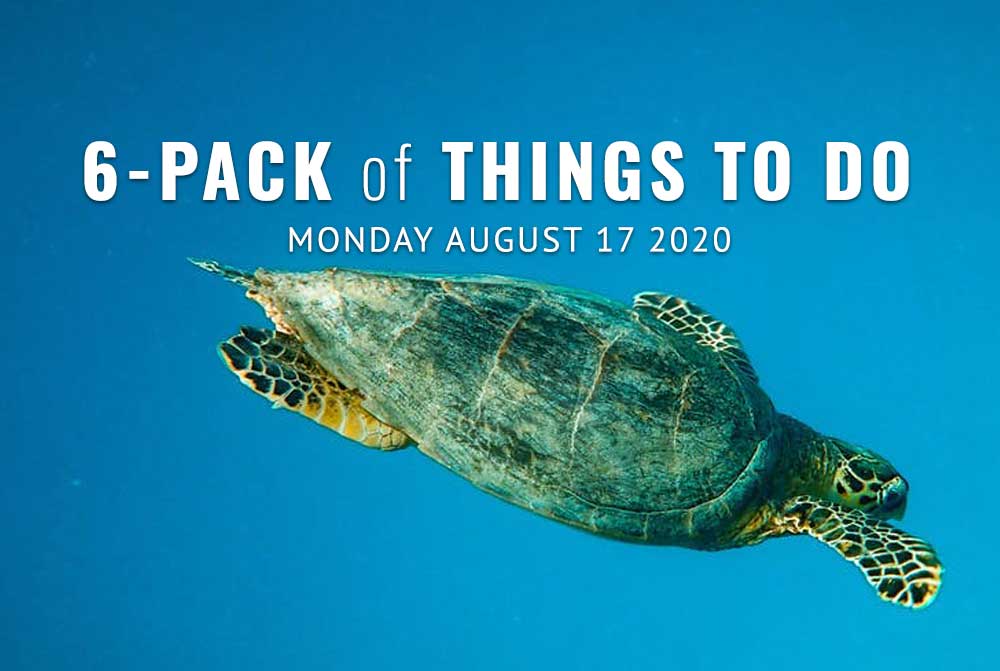 HAPPY MONDAY! Peaks & Pints’ 6-Pack of Things To Do is putting some sass into an 87-degree day!

ANIMALS: The revving of engines, stoplights blinking incoherently at passersby, the soft roar of the port beneath a starlit sky … it’s easy to get lost in the shuffle. It’s easy to forget that nature is all around us. The flora and fauna is often lost … a mere speck of life outside the comfort of an air-conditioned vehicle. Point Defiance Zoo & Aquarium is open with all the safety precautions. Go visit Bruno the 23-year-old Atlantic green sea turtle. Gaze at the jellyfish gallery. Watch the penguin chicks learn to swim. 9 a.m. to 5 p.m., Point Defiance Zoo & Aquarium, 5400 N. Pearl St., Tacoma, must have a timed ticket online

CIDER FLIGHT: In 1982, Pres. Ronald Reagan proclaimed August “Peach Month” and called upon the people of the United States to incorporate this nutritious fruit into their diets, and call upon interested groups to celebrate this month with appropriate programs and activities. Therefore, Peaks & Pints will incorporate peaches into our weekly Monday cider flight. The peach (Prunus persica) is a species of Prunus native to China that bears an edible juicy fruit also called a peach; today they are grown in numerous countries. Whatever. The queen of all stone fruits makes for delicious cider. Stop by for Peaks and Pints Monday Cider Flight: Peaches. 11 a.m. to 8 p.m., Peaks & Pints, 3816 N. 26th St., Proctor District, Tacoma

EXPLORE: Harbor WildWatch is environmental education organization dedicated to inspiring stewardship for Puget Sound and the greater Salish Sea based at the Skansie Visitor & Interpretive Center in downtown Gig Harbor. Moon snails, crabs, sea stars and other creatures are ignoring the pandemic. Therefore, Harbor WildWatch points a camera their way capturing their lives via Facebook Live. They’ll be visiting different beaches throughout the summer, some of which we’ve never explored before; others that are familiar favorites. Tune in live at 10:30 a.m., or catch the video afterward on YouTube. 10:30 a.m., Harbor WildWatch Facebook

TAM AT HOME: There are those who dread going home to an empty house, and there are those who revel in it. Those in the second category usually have large families. Or just families. Or maybe they’re just antisocial, which is fine. But the point is to scheme new and innovative ways to achieve that empty house. To this end, perhaps you should check out the Tacoma Art Museum’s TAM At Home center for art projects for the kids. The Museum offers art how-to videos with educational components. Set the kids up in front of the screen then take some time to do anything you want. Ahhh … TAM at Home.

ART CHANTRY: Art Chantry is to rock posters what Peaks & Pints is to sanitizing cooler doors — quite simply, the very best. Having created for labels like Estrus, Rhino, Sub Pop and Chuckie-Boy, and worked with just about everyone there is to work with — from the Center on Contemporary Art to Hempfest and beyond — Chantry’s imagery is iconic, as are the punk ideals they’re based upon. He also punched his time card four different times as art director for the Rocket music rag. His history is rich and his art influential. Do yourself a favor: grab a Triceratops Brewing Bohemian Rhaspberry Golden Ale out of the Peaks & Pints cooler then check out Chantry’s art of the Audio Gasoline Pintrest page.

MOVIE: The Grand Cinema streams the critically-acclaimed filmmaker Erik Nelson’s Apocalypse ’45 in their Virtual Screening Room. The new documentary features previously unreleased documentary footage from the National Archives of the final days of WWII in the Pacific, as well as restored film clips such as John Ford’s shots of the decimated Pacific Fleet after Pearl Harbor. During the pandemic, The Grand is offering movie fans the opportunity to view films online. Each can now be viewed from the comfort of your living room with half the proceeds going back to The Grand. Pair the movie with Counterbalance Brewing‘s Big Bada Boom Hazy Double Tangerine IPA. $12 movie