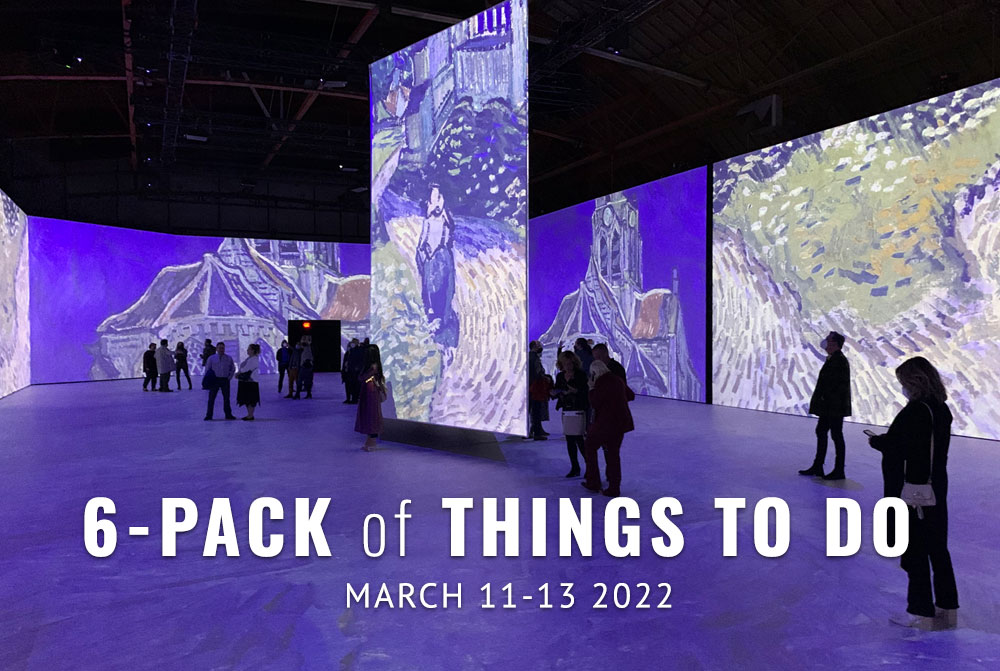 ART: Walk among sunflowers or lay beneath the stars to the sound of modern-classical music as world-famous art is brought to life at Van Gogh: The Immersive Experience. The digital art installation and interactive space runs at the Tacoma Arts Live hosted Tacoma Armory through April 16 with timed entries. Visitors can surround themselves with 360-degree projections of more than 200 of Vincent van Gogh’s sketches, drawings, and paintings on 15,000-square-foot, floor-to-ceiling screens — including the floor as a screen. 10 a.m. to 8 p.m. Friday and Saturday, March 5, 10 a.m. to 7 p.m. Sunday-Thursday, Tacoma Armory, 1001 S Yakima Ave, Tacoma, $33.50-$48.50

BEER FLIGHT: You won’t find any piñatas or enormous velvet sombreros hanging from the ceiling at Peaks & Pints, but you will find beers brewed to taste like Mexican hot chocolate — albeit cold. Hot chocolate originated in Mesoamerica before being co-opted by the Spaniards (and sugar high kids the world over). Mexican chocolate is much different from the rich, cocoa butter compound most folks have floating around their kitchen. The secret ingredients? Granulated sugar and cinnamon. The granulated sugar gives the chocolate a gritty texture that’s muy differente compared to the smoother, European-style chocolate. Cinnamon, or canela, is the other secret ingredient. Canela is a softer, more fragrant Ceylon cinnamon than the hard sticks typically floating around your mulled cider. Sweetness and cinnamon are two traits commonly found in Mexican chocolate beers, although many add peppers for heat. Stop by Peaks & Pints today and grab our to-go flight, Peaks and Pints Pilot Program: Mexican Chocolate Beer On The Fly. 11 a.m. to 11 p.m., Friday, March 11, Peaks & Pints, 3816 N. 26th St., Basecamp Proctor, Tacoma

THEATER: “God, I’m a dancer. A dancer dances.” Cassie’s desperate cry resonates in the fearful yet ever-hopeful soul of the Pulitzer Prize- and Tony Award-winning musical A Chorus Line, which is making a welcome return to the Tacoma Little Theatre Friday night. Cassie is one of seventeen dancers who share their dreams and innermost secrets while vying for eight openings in a new musical. A Chorus Line is the longest-running American musical in Broadway history. Michael Bennett’s sometimes-raunchy valentine to theater gypsies is still capable of moving an audience to laughter, tears, and goose bumps. Its very humanity elevates theatergoing to an event. 7:30 p.m., Friday and Saturday, 2 p.m. Sunday, through April 3, Tacoma Little Theatre, 210 N. I St., Tacoma

FILM: The Grand Cinema will screen Strawberry Mansion late Friday and Saturday night as part of their Weird Elephant series of cult classics and fresh flicks that are bizarre, spine-chilling, and, well, weird. In Strawberry Mansion, Kentucker Audley plays James Preble, a bored and tired tax collector. However, he doesn’t go over forms: he replays people’s dreams, which are now a taxable asset. When he’s sent to audit the decades of unpaid taxes on the dreams of Arabella Isadora (Penny Fuller), he finds himself in a most peculiar and unexpected set of circumstances, the kind that could only be borne from walking into years of someone else’s inner world. 10 p.m. Friday and Saturday, March 11 and 12, The Grand Cinema, 606 S. Fawcett, Tacoma

TOURNAMENT OF BEER: In April 2022, Peaks and Pints will host the Tournament of Beer: Northwest Lagers. Chosen through a public nomination process, the top 64 vote getters — the real lagers of genius — will compete Monday-Friday on our website, April 8-30. Through online voting, Washington and Oregon pale lager drinkers will pick daily winners until the best lager in the Northwest is crowned. It’s just like March Madness, only with way more burps. The crispy boi battle grand champion will be announced at the Tournament of Beers Party April 30 at Peaks and Pints in Tacoma’s Proctor District. The final two lagers will battle live pouring from Peaks and Pints’ Western red cedar tap log with the champion brewery receiving a permanent handle at Peaks and Pints through the spring and summer. First, we need you to help select the 64 lagers that should be included in the tournament. Vote for your three favorite regular lagers brewed in Washington and Oregon before 11:45 p.m. Sunday here, maybe win a $25 Peaks & Pints gift card, then look for the first round of Tournament of Beer: Northwest Lagers voting April 8 at tournamentofbeer.com.