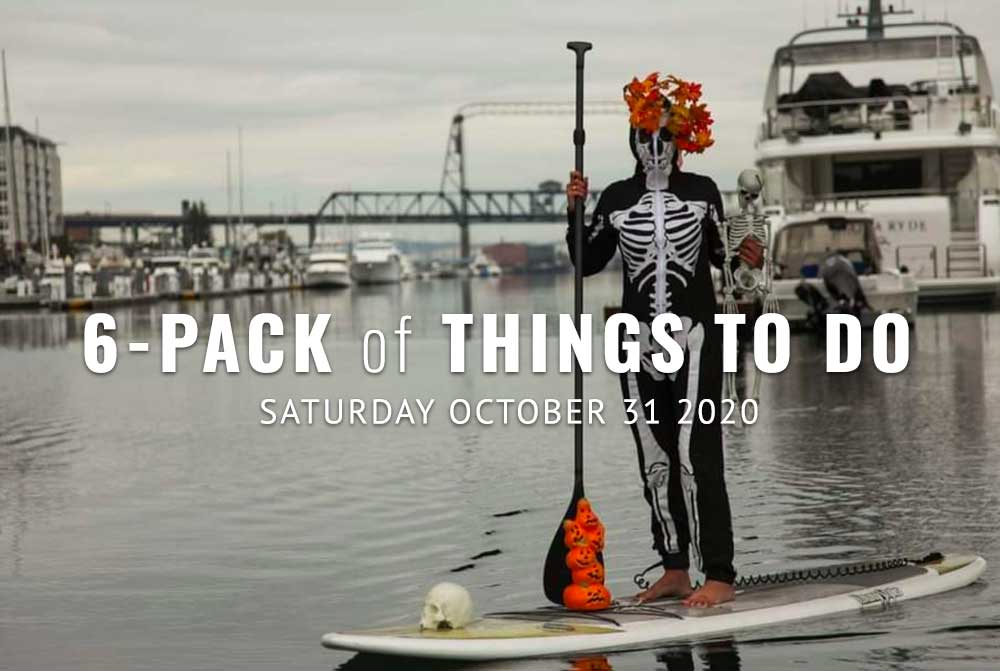 The frights are upon us once again, and there are, this year, not that many ways to spend the Devil’s holiday. 6-Pack of Things To Do is your source for costume paddle boarding, spooky beers, Star Wars music, and Meckenstein on North 29th. It’s up to you to decide where you’ll go, and, of course, what you’ll wear. Cheers!

GRIT CITY COSTUME PADDLE: If you follow Rosemary Ponnekanti on Instagram you know she loves water. More specific, the former News Tribune art critic jumps into water — from anything and anywhere. Don’t be surprised if she docks her paddleboard and jumps off something during today’s Grit City Costume Paddle, which she and Diane Knuckey Hansen host. They invite you to join them, in Halloween costumes, to paddle your scary ass around the Thea Foss Waterway with one major requirement, besides a mask: meet under the 11th Street Bridge at noon for a group photo. There will be prizes for best costumes. 11 a.m. to 1 p.m., Thea Foss Waterway

BEER FLIGHT: Savor it. We won’t see a full moon on Halloween again for 19 years. On this fateful Halloween night, the stars will align to present us with a fittingly spooky full moon — and a “blue moon” at that. But don’t expect a blue hue when you gaze up at the sky; the “blue moon” phrasing is more of a distinction, and less of a comment on the actual color. However, you can appreciate the rarity of the phenomenon. Because of assorted Leap Years and the moon’s orbit, this 19-year cycle has been off by a day since 1944 — the last time there was a full moon on Halloween. After that, the full moon shifted to Nov. 1 … until this year. Peaks and Pints suggests you partake in a blue moon night hike to look for spooky beasties such as owls, bats, toads, scorpions (one can dream), and spiders. You’ll need spooky beers. Drop by Peaks & Pints and grab our to-go flight, Peaks and Pints Pilot Program: Halloween Hike Beers On The Fly. 11 a.m. to 10 p.m., Peaks & Pints, 3816 N. 26th St., Basecamp Proctor, Tacoma, guaranteed seating via Open Table app

KIDS: Little ghouls and goblins can welcome the witching hour today in probably 6 ways (tough year), and not all of them require knocking on doors and begging for food. The Museum of Glass opens its Education Studio to create beaded spiders and bat silhouette, as well as the glass Pumpkin Patch in the MOG Café. Point Defiance Zoo & Aquarium brings out all the spooky-cool animals — online. LeMay Car Museum knocks $3 off admission for those wearing costume during Family STEAM Day.

MECKENSTEIN: Musician Jim Meck is alive! Alive! Alive from his front porch! As part of his “Pedestrian Serenade” in North Tacoma, he offers Halloween tunes treats from his front porch. “Plan your afternoon walking route to include my block,” he says. “No tricks, I promise.” He loves classic rock, but if you show up dressed as a mummy then maybe he’ll perform wrap. 3-5 p.m., North 29th between Cedar and Alder in North End Tacoma, Meck Paypal

CLASSICAL: Many of us are preparing for a different kind of Halloween this year. Socially distanced trick-or-treating and scary movie marathons at home will be the norm to keep COVID in check. But there’s a spooktacular way to connect with classical music fans today. The Tacoma Youth Symphony is offering a virtual concert of Halloween-inspired music that you can stream from your own home. It’s called “A Night at the Movies.” The costumed youths will perform scores from such movies as Pirates of the Caribbean, Sleeping Beauty, Star Wars, and Raiders of the Lost Ark. 5 p.m., Tacoma Youth Symphony Youtube page

MOVIE: The Grand Cinema might be presenting the scariest attraction today. You can stream the Spanish film Madre in their Virtual Screening Room, wherein a mother (Marta Nieto) receives a call from her 6-year-old, who, while vacationing with his dad, is suddenly alone on a deserted beach with a man approaching. Rodrigo Sorogoyen’s 17-minute film is nothing but tension, largely thanks to being shot virtually in one take as the woman holds a panicky phone conversation with her small son, lost and threatened on a beach. $12 movie