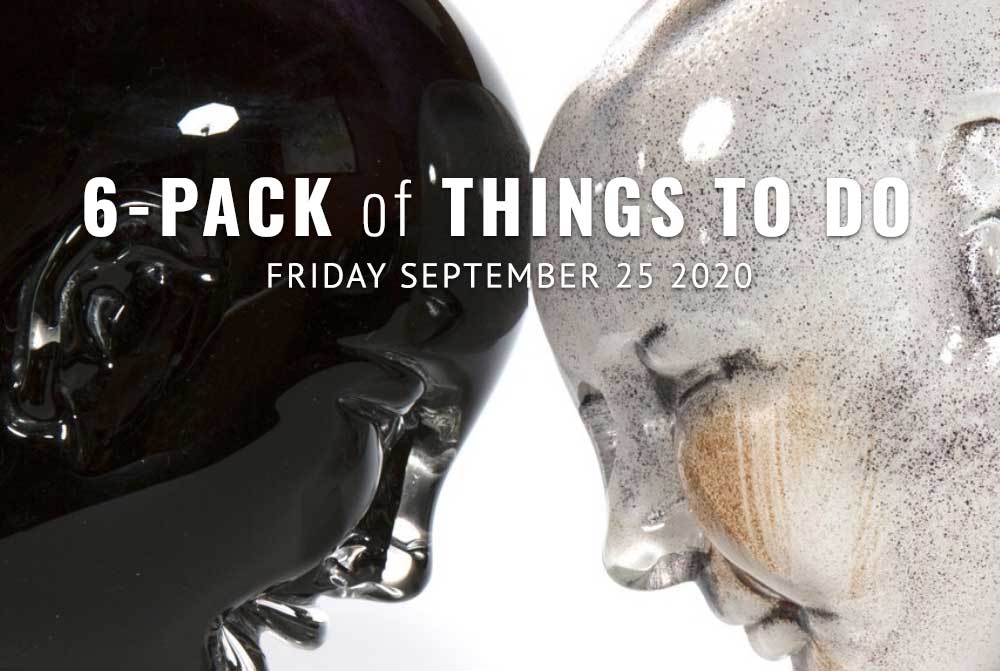 6-Pack of Things To Do coming to you from the Peaks & Pints craft beer bar, bottle shop and restaurant in Tacoma’s Proctor District. Make a Day of the Dead altar, hang out at the Museum of Glass, stream comedy — happy Friday!

REOPENING: The Museum of Glass reopens today. Exhibitions on view include Richard Marquis: Keepers, Transparency: An LGBTQ+ Glass Art Exhibition, and Alchemy 5: Transformation in Contemporary Enamels. Masks are required and MOG will be asking all guests to maintain physical distancing protocols while enjoying the Hot Shop, galleries, and while shopping in the Museum Store. 10 a.m. to 5 p.m., 1801 Dock St., Tacoma, photo courtesy of museumofglass.org/National Liberty Museum, Philadelphia, PA

BEER FLIGHT: On sprawling farms clustered around Yakima and Willamette valleys, thousands of green Humulus lupulus vines snake vigorously skyward. A relative of marijuana, these hop plants produce resiny, cone-shaped flowers prized for their use as a bittering agent in beer. September is the traditional time for end-of-the-season harvesting and hops are no exception. That’s good news for beer lovers, as many breweries take advantage of the numerous Pacific Northwest hop farms, creating beers flavored by hops sourced 3-5 hours from the kettle boil. These beers typically have an aroma akin to that of a freshly-mowed lawn and the resinous and deep floral notes that hop heads love. Today, we present a to-go flight of fresh hop beers from Double Mountain Brewery in Hood River. 11 a.m. to 8 p.m., Peaks & Pints, 3816 N. 26th St., Basecamp Proctor, Tacoma

FARMERS MARKET: In an effort to keep their vendors and community safe amid the public health crisis the Lakewood Farmers’ Market has been operating in the giant Fort Steilacoom Park with drive-thru and walk-thru options. Cars can drive in a horseshoe slowly through the middle of the market, while pedestrians will walk around the exterior, using the sidewalk. Vendors will have both sides of their booths open, to allow customers to shop. Vendors will offer farm fresh produce, specialty goods, desserts and they’ll have food trucks such as Burrito Boy, Bliss Small Batch Creamery, Stacks Burgers, And The Old Red Barn Popping Company. 2:30-6:30 p.m., Fort Steilacoom Park, 8714 87th Ave. SW, Lakewood

ART PROJECT: For the 17th year, Tacoma Art Museum hosts a Dia de los Muertos Festival. Day of the Dead, ya’ll. This may or may not surprise you, but the Day of the Dead Festival at TAM brings in the largest crowd of the year. Unfortunately, not this year as it will be celebrated virtually. In honor of Día de los Muertos, TAM invites individuals and groups to create altar installations to be a part of their virtual Ofrenda (altar) exhibition opening Oct. 31.

MOVIE: A week ago, amid what was already a smoldering political landscape, the nation received the sad and long-dreaded news that Supreme Court Justice Ruth Bader Ginsburg, aged 87, had died, a victim of recurrent pancreatic cancer. Justice Ginsburg, who had been the leading liberal light on the Court, leaves behind a tribunal dominated by conservative jurists, and speculation inevitably ensued as to what comes next. Thankfully, The Grand Cinema re-loaded the Oscar-nominated Ginsburg documentary RBG into their Virtual Screening Room. It tracks her upbringing in Brooklyn, N.Y., and loving marriage to her late husband, Martin Ginsburg, her years leading the legal fight against sex discrimination in the 1970s, rise to the Supreme Court, and her ascent into a pop culture phenomenon. $6.99

COMEDY: Circle Up Productions presents Short Bits! — an evening of comedy, live music and DJs virtually from the Courthouse Square Ballroom in downtown Tacoma. Entertainers from around the world will perform short bits while you enjoy Gigantic Brewing’s Rainbow Supreme from the Peaks & Pints cooler. The event is free, but donations are being accepted. 8 p.m., Short Bits Zoom Room, photo courtesy of @carlarans