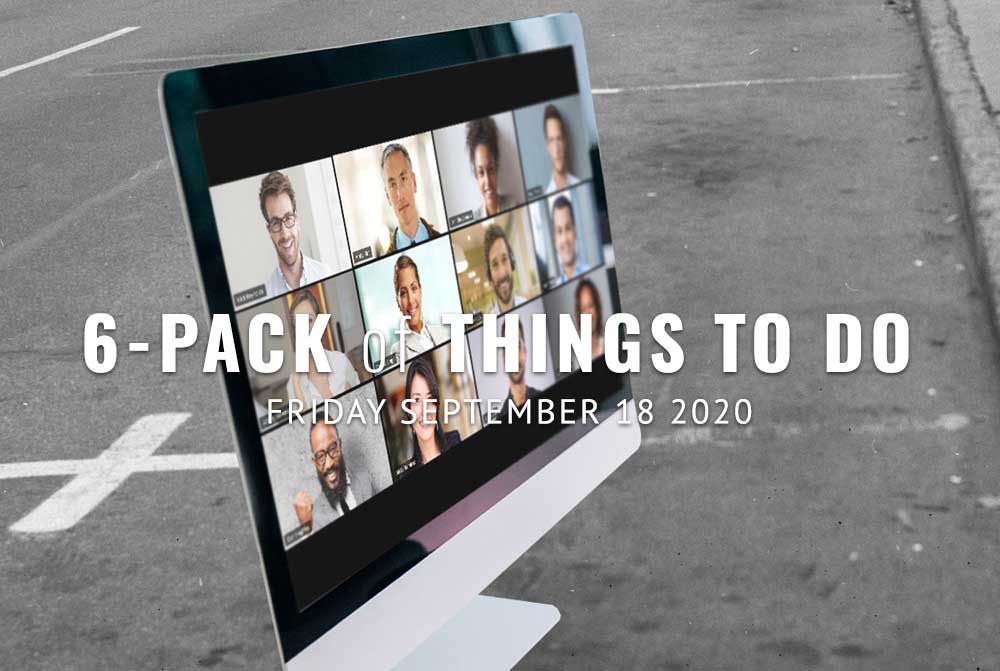 In short, Peaks & Pints 6-Pack of Things To Do reminds you that you are far from alone in your understanding that this is one hugely painful, incredibly difficult, unbearably gorgeous, terrifying, excruciatingly short life and sometimes the best you can hope for is to drink Washington cider and watch an elk and buy a squash and scream through a mask at cobwebs and twirl in the middle of a park and try to lick the moon.

PARK(ING) DAY: Holy Leslie Knope! Can you imagine Tacoma without Optimist Park? Without Ursich Park? Without anywhere to take your dog off the leash and let her run? Even in dense, urban areas, open space is a calming force, giving us a place to sit, lie, tag zombies or walk amidst the birds and the trees. National Park(ing) Day — the annual global event where citizens, artists and activists collaborate to temporarily transform metered parking spaces into “park(ing)” spaces — is canceled, at least in Tacoma, due to COVID-19. Tacoma Park(ing) Day organizer Downtown On The Go wants to discuss the pandemic and park(ing). They want to call attention to the need for more urban open space, generate discussion and debate around how public space is utilized, and to improve the quality of urban habitat. They’ll do so, in their Zoom(ing) Room, every hour, from 10 a.m. to 2 p.m. with a different parking subject, including opening sidewalks to restaurant at 1 p.m. Grab a E9 Brewing Tac City Lager from the Peaks and Pints cooler and park it in front of your screen. 10 a.m. to 2 p.m. every hour, Zoom(ing) Room or Downtown On The Go Facebook Live

CIDER FLIGHT: It’s not surprising that craft cider has taken root in Washington state — a region of wine and craft beer enthusiasts. Washington is the second largest wine producer and has the second highest number of craft breweries in the country. But when it comes to cider, Washington is fourth in the nation. In 2008, there were maybe four cideries in Washington; now about 66 dot the state from San Juan Island to Pullman, and even wineries are getting in on the action. It also only makes sense that an area known as the world’s apple capital would also be home to producers of hard apple cider. For Peaks & Pints’ ninth to-go cider flight during Washington Cider Week, we focus on cideries in the greater Chelan County where apple is king. 11 a.m. to 8 p.m., Peaks & Pints, 3816 N. 26th St., Basecamp Proctor, Tacom

METRO PARKS: Good news! After nearly a week of unhealthy air quality that prompted Metro Parks facility closures, there’s now a bright side: All the things are opening backup. We’re talking Point Defiance Zoo & Aquarium, Northwest Trek Wildlife Park, W.W. Seymour Botanical Conservatory, and on and on. Important: Remember the health effects from smoke can vary greatly from person to person. Visit tpchd.org to find out how to protect yourself from smoke exposure. Also, the park-wide burn ban is still in effect. No open burning or grilling is allowed, regardless of whether charcoal briquettes or propane are used. But, still, animals and plants!

NEW CIDER: Did you blow out your flip-flop? Did you lose your shaker of salt? Well, cutie, Incline Cider to the rescue! As part of Washington Cider Week, Incline Cider will bring back a favorite cider to their downtown Tacoma taproom today: Lime + Salt. This cider has some serious margarita vibes — bright and citrusy with a hint of salt to balance out that pop of lime. Creole Soul will be onsite 4-8 p.m. Bonus: Dollar from every pint sold during will go toward their initiative to feed the homeless. 2-5 p.m., Incline Cider, 2115 S. C St., Tacoma

MARKET DAY: Today marks the last day the Lakewood Farmers Market will stay open 3-7 p.m. Beginning next Friday, the market at Fort Steilacoom Park will open at 2:30 p.m. and close at 6:30 p.m. through Oct. 16. The Lakewood Farmers Market takes advantage of Fort Steilacoom’s massive size so cars can drive in a horseshoe slowly through the middle of the market, while pedestrians will walk around the exterior, using the sidewalk. Vendors will have both sides of their booths open, to allow customers to shop. It’s awesome. 3-7 p.m., Fort Steilacoom Park, 8714 87th Ave. SW, Lakewood

SPOOKY TRAIL: Kids can be scared in a zillion ways this weekend, most of them have nothing to due with a haunted house. Usually Marris Farms Haunted Woods is a 35-minute outdoor walk through more than 25 different creepy scenes hosted by equally creepy characters. This weekend, the creepy characters are furloughed so it’ll be just detailed scenes. It’ll be slightly scarier than the sky but not at scary as shopping at the mall. 8-9:30 p.m., Marris Farms, 25001 Sumner-Buckley Hwy., Buckley