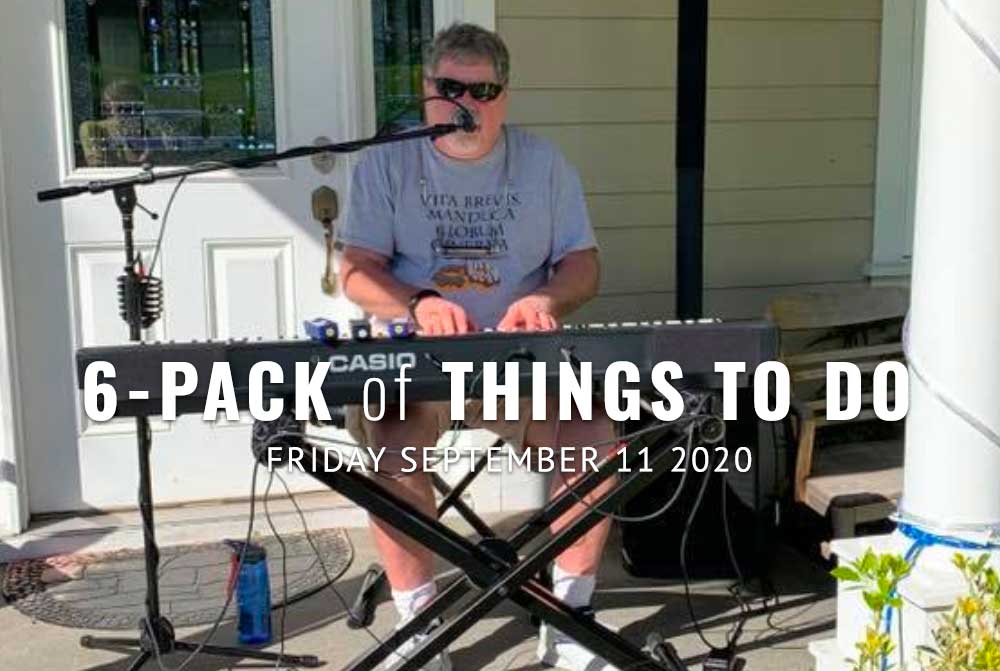 Sept. 11, 2001, a day of inconceivable tragedy, will always be a date seared into the memories of Americans. With the 19th anniversary of 9/11 terrorist attacks here, join us as we remember those who lost their lives and honor those who serve and protect us every day. Here is today’s 6-Pack of Things To Do. …

MECK DADDY: As the ongoing absence of live concerts due to coronavirus plunges dedicated live music fans into spiraling boredom and insanity, a light has appeared within the tunnel: the increasing proliferation of porch concerts in neighborhoods. Musician Jim Meck will be live at North 29th Street as he performs another “Pedestrian Serenade” for North Tacoma. Meck makes music from his porch for all to enjoy. He loves classic rock, but he is very comfortable with jazz standards, classic country, and some current hits. Plan your afternoon walking route to include his block of North 29th between Cedar and Alder in North End Tacoma and enjoy. 5-7 p.m., Meck Facebook, Meck Paypal

MARKET DAY: Fort Steilacoom was founded by the U.S. Army in 1849. It was among the first military fortifications built by the U.S. north of the Columbia River in what was to become the state of Washington. In 1868, the government purchased it for use as the insane asylum for Washington Territory. Hospital residents grew crops and orchards in the park area, and planted many of the poplar trees that line Waughop Lake. More than 3,000 hospital residents are buried in the cemetery near the parking lot. Let’s shop for food there! The Lakewood Farmers Market takes advantage of Fort Steilacoom’s massive size so cars can drive in a horseshoe slowly through the middle of the market, while pedestrians will walk around the exterior, using the sidewalk. Vendors will have both sides of their booths open, to allow customers to shop. It’s awesome. 3-7 p.m., Fort Steilacoom Park, 8714 87th Ave. SW, Lakewood

TASTE OF EIGHTH STREET: It would be hard to determine what Eighth Street between Pacific Avenue and Court A in downtown Tacoma tastes like. You can be sure the topsoil would smack of scandal — but it would probably also taste a bit like salty prospector tang. Then there’d be all that fossilized dinosaur crap to contend with. When you think about it, Tacoma would probably taste pretty disgusting. Fortunately, the restaurants surrounding that stretch of Eighth Street present a more palatable survey of the street. Wooden City, The Matador, Thai Pepper, Odd Otter Brewing , Domino’s Pizza, The Forum, The Office Bar & Grill, Fresh Rolls, Dorky’s Arcade, and Little Radio host an outdoor food court with tables and chairs to enjoy their cuisine. Sure beats eating dirt. 4-9 p.m., Eighth and Pacific Avenue, downtown Tacoma