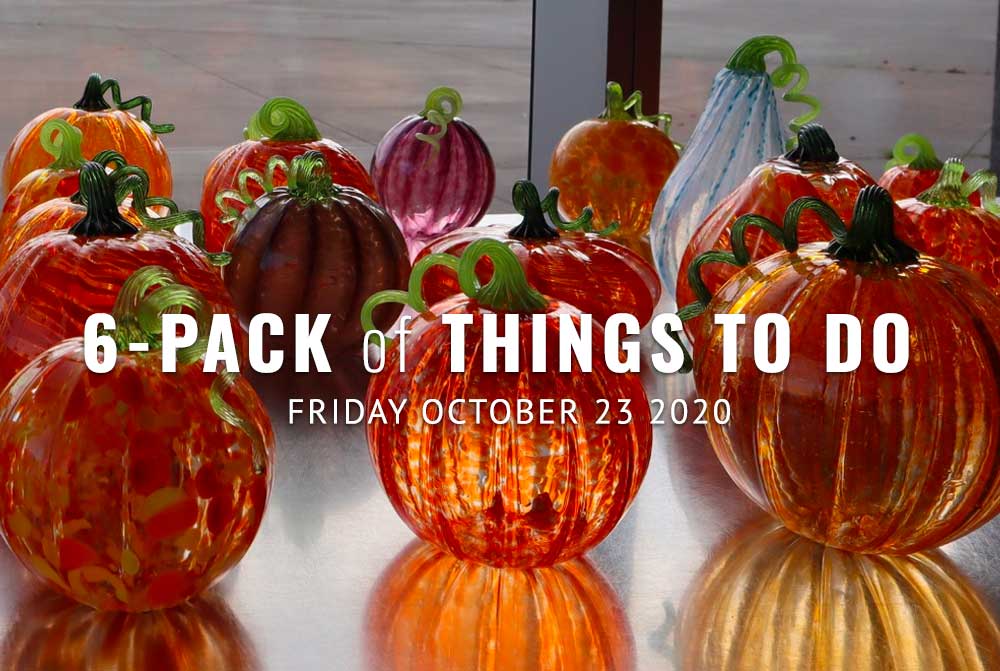 The world increasingly looks like the first act of a movie based on a comic book. Where are our heroes? Who can save Gotham? Who can save America? The answer is finally here: 6-Pack of Things To Do. Happy Friday!

GLASS: The autumnal equinox and falling leaves seem to make America a little pumpkin crazy. Grocery stores are quick to feature piles of pumpkins outside their doors, while numerous local businesses don pumpkin décor in their windows at the changing of seasons. The Museum of Glass is putting a new spin on a traditional pumpkin patch by creating their own. Several Museum’s café’s tables vacant due to spacing reasons will be covered with one-of-a-kind pumpkins created by a variety of local vendors and the Hot Shop Team through Sunday afternoon. 10 a.m. to 5 p.m., through Sunday, Oct. 25, Museum of Glass, 1801 Dock St., Tacoma

BUBBLES: Even though bubbles are typically most enjoyed by those under 60 inches tall, the Bubble Truck makes magic out of soap and water, and can entrance anyone within sight. Crescent Moon Gifts on Tacoma’s Sixth Avenue will have their windows washed not by fairies this time but rather the Bubble Truck this morning. And, the Bubble Truck driver doesn’t care if you try to juggle the bubbles, throw them at cars of manipulate them into stand-alone Frank Gehry-esque sculptural structures. 10:30 a.m. to 12:30 p.m., Crescent Moon Gifts, 6901 6th Ave., Tacoma

BEER FLIGHT: It dropped to 37 degrees last night in Tacoma. Today, it’s 51 and all the rain, with winds peaking at 15. Winter is coming. If you’re looking to curl up in front of fireplace with a delicious beer, it’s time to think winter warmer. These brews are not within a narrowly defined style; rather, they’re a broad range of beers that offer bold flavors, often with sweet maltiness and lots of alcohol. In fact, if you want to know the whole horrifying holiday gamut permissible in your winter warmer, the BJCP’s guidelines for “Winter Seasonal Beer” include “Christmas cookies, gingerbread, English-type Christmas pudding, evergreen trees, or mulling spices. Any combination of aromatics that suggests the holiday season is welcome.” Terrifying, yes, but again, we’re not really opening up a spice rack and dumping it into beer this season. The BJCP will “allow for brewer creativity as long as the resulting product is balanced and provides some spice presentation.” When Peaks and Pints thinks winter warmer, we think of the beer we list below. Stop by our craft beer bar, bottle shop and restaurant and grab a to-go flight of Peaks and Pints Pilot Program: Winter Warmers On the Fly. 11 a.m. to 10 p.m., Peaks and Pints, 3816 N. 26th St., Basecamp Proctor, Tacoma, guaranteed seating via Open Table app

THEATER: Tacoma Little Theatre’s Castmates cast reunion series continues tonight with cast members from TLT’s 2018 production The Foreigner. “The Foreigner was a tonally wild show, stuffed with ideas and targets for its comedy, touching on racism, sexism, anti-Semitism and gas lighting,” wrote theater critic Rev. Adam McKinney in the Weekly Volcano. “In a way, the most impressive aspect of the show was how frequently The Foreigner actually managed to nail its material, juggling very serious topics under the guise of farce. Produced by Tacoma Little Theatre and directed by Casi Pruitt, The Foreigner was a bit of a Trojan horse, smuggling big ideas in the form of a wild, very odd crowd-pleaser.” Maybe this review will be part of the discussion tonight. 7 p.m., Tacoma Little Theatre Zoom Room, no cover

CLASSICAL: Dawn Padula, mezzo-soprano, is a versatile performer of opera, oratorio, musical theatre, jazz, and classical concert repertoire, having performed extensively in national and local roles in the Pacific Northwest. Dr. Padula joined the University of Puget Sound School of Music faculty in 2009-2010 as Director of Vocal Studies after having taught at Sam Houston State University in Huntsville, Texas. She completed both a Bachelor of Music in Vocal Performance and a Bachelor of Arts in Communication at Trinity University, a Master of Music degree from the Manhattan School of Music, and a Doctorate of Musical Arts from the University of Houston Moores School of Music, where she focused in her dissertation on teaching the tenor and baritone voice. We could go on, seriously, but let’s get to the listening. The University of Puget Sound School of Music hosts Dawn Padula’s talents during their Jacobsen Series faculty recitals broadcast via Schneebeck LIVE. 7:30-9 p.m., Schneebeck LIVE, no cover

MOVIE: The incredible life of Harry Chapin will be seen like never before in Harry Chapin: When In Doubt, Do Something, Rick Korn’s documentary streaming in The Grand Cinema’s Virtual Screening Room. The documentary follows the renowned Grammy-nominated folk singer from childhood — spent under the shadow of his jazz drummer father — throughout his tragically short life and captures the up-and-down spirit of one of folk’s great humanitarians. $9.99 for 14 days, photo courtesy of pressparty.com