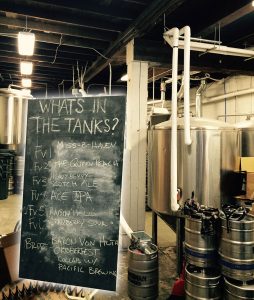 After the turn of September /
In the cloudy skies over Tacoma /
Came a roar and a thunder people had never heard /
Like the scream and the sound of a big war bird.
Up in the sky, a beer in a plane /
Baron von Huth is its name.
Many breweries tried, but two hit their stride /
Early October they’ll release it on the countryside.

“We brewed the Oktoberfest beer at Wingman, and it’s still lagering right now,” says Navarro. “We used a base recipe Ken had used in the past. I came over and we went through it together. We tweaked a few things — water, mash temp, hops, type of yeast. I provided the yeast and he provided the malt. It was fun.”

The Baron von Huth is a Märzen-style beer, characterized by a medium to full body, a malty flavor and a clean dry finish. Navarro added his preferred German Lager Yeast.

The beer will be released in the taprooms of both breweries, with outside distribution. Pacific Brewing will let fly its taproom Saturday, Oct. 3 during its first anniversary party, complete with live music, special seasonal and limited edition beer, food, prizes and more. In addition to Baron von Huth, attendees will enjoy pints of newly released Doppelbock and Hefeweizen, as well as the brewery’s year-round offerings.

“As part of the celebration, we’re releasing the first of our Jubilaum Anniversary Series: Black Cherry Berliner Weisse too,” adds Navarro.

Be sure to put this Oktoberfest beer in your field of vision before it goes spinning out of sight.