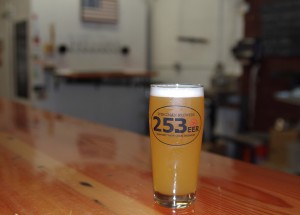 The South Sound is home to 20 or so craft breweries, with a handful of breweries-in-planning here as well — a sign of a growing depth and breadth that makes the South Sound a notable beer region in the country. One of those breweries, the 51-month-old Wingman Brewers, will double its beer-making capacity by the end of August.

Last week I dropped by Wingman Brewers for the growth details and found head brewer Ken Thoburn brewing a big batch of his Prop Wash IPA, which is being bottled this week. “We dry-hopped the Prop using the most hops were have ever had at the brewery, I think even more than our dry-hopped Citra Pale Ale for Total Wine’s upcoming anniversary,” said Thoburn.

I told him the Aficionado Cigar Lounge in East Tacoma blazed through his Wingman Old Plank Pils and wants more.

Thoburn’s plan is to make more beer to disappear fast.

Thoburn, Derrick Moyer, Daniel Heath and Jason Sabol launched Wingman Brewers as a nano-brewery at 1727 Fawcett in downtown Tacoma in April 2011. In 2012, they moved their one-barrel system to their current location at 509 ½ Puyallup Avenue, adding a taproom. In 2013, they were a 7-barrel operation, doubling their production in two months. In 2014, they added larger fermentators, doubling their production again. By the end of August 2015, they will have doubled production once again.

“Our current system couldn’t keep up with demand from our distributor,” says Thoburn. “So among other items we’re adding 200 kegs, two tanks, a keg washer and tripling our cold storage. It’s all about containers. Growth demands more containers.”

Thoburn, Heath and crew are excited for their growth. It’s easy to double when you’re small. This summer’s expansion takes the Tacoma brewery to a whole new level. More draught beers will hit the taproom, as well as a move from 16-ounce to 12-ounce cans.

Thoburn needs to get the larger system up and running soon as his Scotch Ale, Miss-B-Haven Tripel and Oktoberfest beers need to hit the tanks for fall releases, plus pumpkin and harvest ales in small batches.

“I want to brew a carrot beer this fall too,” adds Thobun. “Carrot beers have an earthy, fall flavor.”

Thoburn will need to drink his vegetables to keep his energy high for all the beer he’ll be brewing.