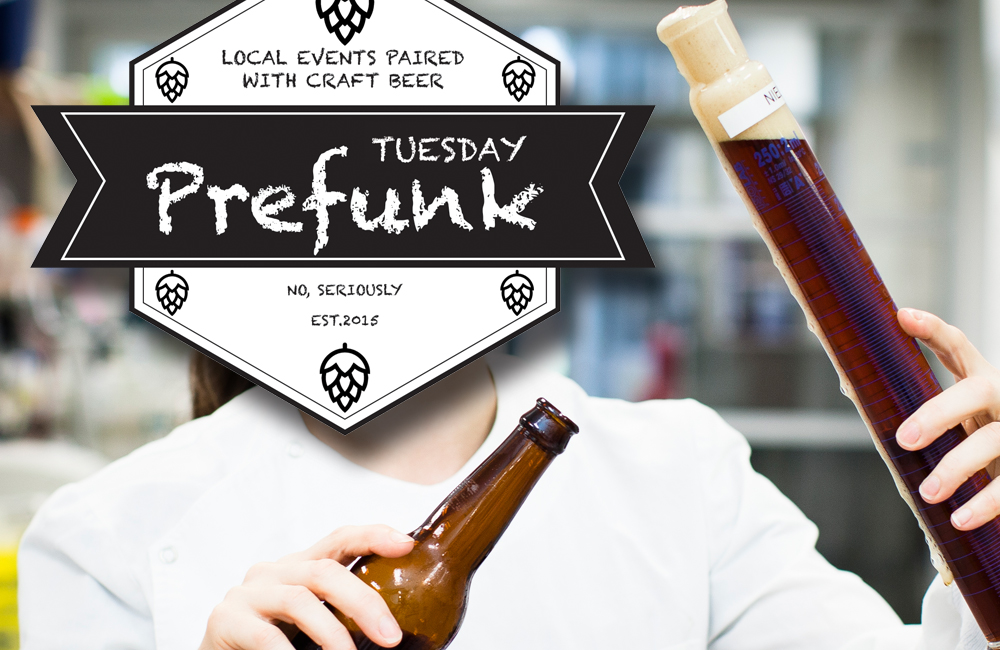 Whether it’s credentialed neuroscientists delivering a solid 25 minutes on the mysteries of the brain or a lecture on difference between a regular robot and a killer robot, Grit City Think & Drink brings scientists and scholars face-to-face with the general public in the comfortable, lively atmosphere at 6:30 p.m. in The Swiss Restaurant and Pub. The evening begins with a 25-minute presentation by a scientist or scholar, which kicks off an extended discussion session between the scientist and audience. Bottom line: it’s an awesome opportunity to get smart while also getting a bit stupid.

PREFUNK: Firestone Walker Brewing Co.’s Luponic Distortion was framed up as a “Revolving Hop Series” and not as an IPA, which was a very bold move. Due to Firestone Walker’s strength in sourcing and brewing magically hoppy ales, they were able to create a beer that will be updated every 90 days with a new blend of cutting edge and experimental hop varieties. Luponic Distortion is a dry, light bodied, aromatic West Coast IPA. Much like Sierra Nevada Hop Hunter and Russian River Blind Pig, this beer is scaled back on malt presence and clocks in at 5.9% ABV. This addresses the criticism of Session IPAs “missing something” while being a beer you can have multiple servings of without being clobbered by an alcohol buzz. Luponic Distortion Revolution 004 is on tap and in the cooler at Peaks and Pints, opening at 11 a.m.. The delicious Revolution 004 incorporates four South African hops — two experimental hops with pronounced tropical fruit qualities, along with distinct white grape and floral notes, the third hop presents a lively passion fruit character and the fourth is more classically noble in profile.

The Grand Cinema screens Jon Betz and Taggart Siegel’s documentary, Seed: The Untold Story, at 1 and 6:25 p.m. The film makes the case that we often ignore — at our peril — the obvious. Consider the lowly seed, which gets a fraction of the attention we lavish on food, and yet without seeds, there is literally no food. And alarmingly, a good deal of earth’s seeds have already disappeared; generally, we cultivate very few, and with an eye toward large-scale commercial crops. The feature-length doc follows farmers, scientists, and seed collectors working to protect the diversity of 12,000 years of agriculture. It’s a good primer on why seeds matter, and a wake-up call to not take them for granted.

PREFUNK: The Pacific Brewing & Malting Company opened its doors in Tacoma’s Brewery District in 1897, then grew to be one of the largest breweries in the Northwest. The Pacific Beer brand was hugely popular along the entire West Coast. Success was cut short by Prohibition in 1916 and Pacific Brewing closed its doors shortly thereafter. Today, nearly 100 years later, Pacific Brewing once again brews beer in downtown Tacoma. The brewery and taproom is a family-friendly establishment serving a variety of Pacific beer styles, including the recently released Griswold’s Winter Warmer, a rich and malty winter seasonal with notes of chocolate, toffee and dried plums. Pacific Brewing & Malting Co. opens at 4 p.m.