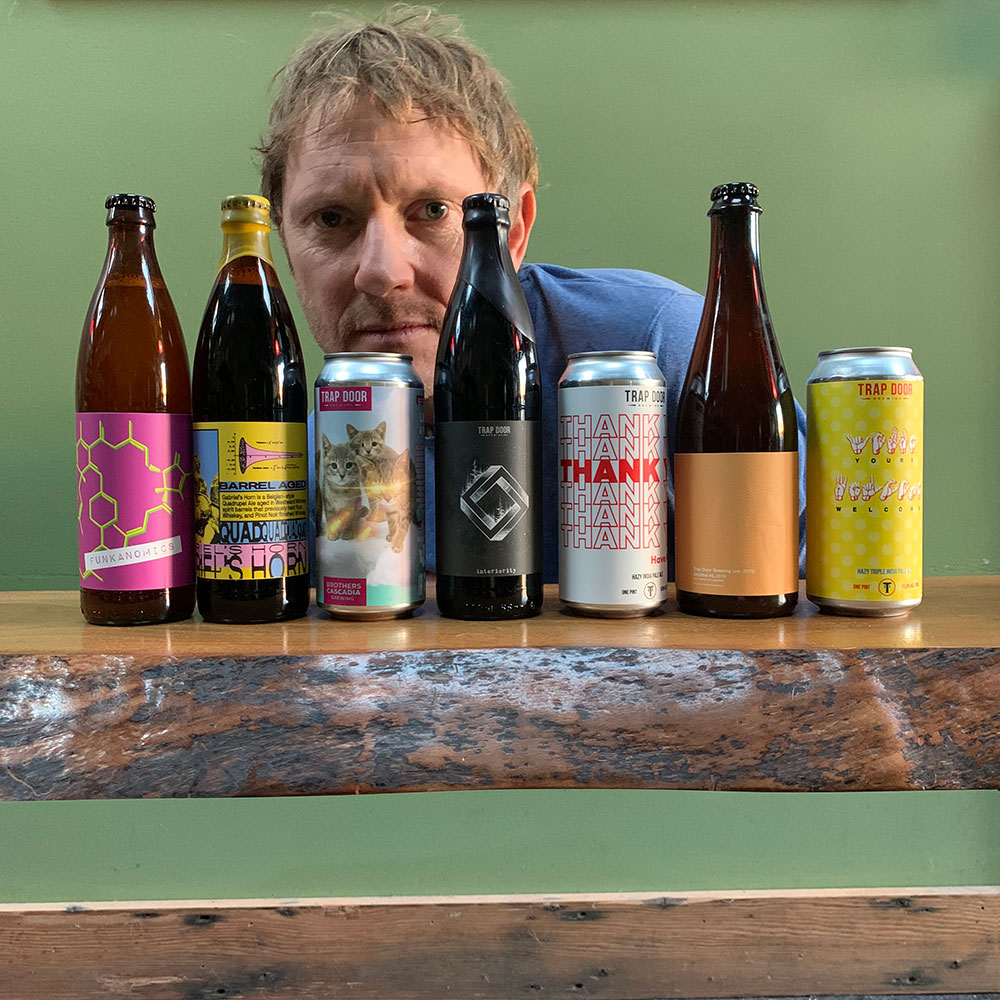 Bryan Shull’s grandfather and father worked at and retired from Great Western Malting Company located at the Port of Vancouver USA, which makes Trap Door Brewing a fourth-generation Vancouver beer family owned business. Shull, who left a 25-year career in renewable energy engineering to start a brewery with his two sons, opened the 15-barrel facility in the Uptown neighborhood of Vancouver in October 2015 because he loves beer and the community of people that make up the brewing industry. While son Zakary Singleton is a silent partner, Zane Singleton is certainly not. Zane, who grew up in Northern California and went to school for fermentation sciences at UC-Davis, grabbed the head brewing job and the medals followed. They have two additional partners – Dave Forster, a silent owner, and Michael Parsons, taproom general manager, who opened Peaks and Pints’ door with seven different kinds of their craft beer. Yes!

FUNKANOMICS: Mixed culture sour saison aged in wine barrels for one year, then dry hopped with Simcoe, Citra, and Nelson Sauvin, and conditioned with pineapple juice, for tart pineapple with ample fruity depth coming from the hops, plus a soft Brett character. 6.4%

GABRIEL’S HORN: Belgian-style quadrupel ale aged in Westward Whiskey spirit barrels — including whiskey, rum, and a pinot noir cask-finished whiskey — for a roasty and boozy quad with a nice touch of candi sugar. 12%

INTERIORITY: Trap Door brought back their imperial stout Interiority with the Westward Whiskey barrel aging still part of the ingredients — although now registering at 13 percent. The rum barrel aging didn’t make the cut, but this black beauty is conditioned on cacao nibs and Madagascar vanilla beans what can only be described as a boozy Hostess Cupcake. 13%

LASER CATS: Laser Cats is an India pale lager dry hopped with Nelson Sauvin, Ella, and Hallertau Blanc for aromas of dank nuggets and white wine. Brewed in collaboration with the kooky cats at Brothers Cascadia, this hoppy lager is clean and crisp. 4.8%

THANK YOU: Thank You is their four-year anniversary IPA, double dry hopped with Citra, Motueka, and Azacca! Thank you!! 6.8%

UNTITLED #4: This mixed culture saison is brewed with all Mecca Grade malted barley and wheat, aged in neutral oak barrels for one year, and then refermented on peaches from Goldendale, Washington. Unfiltered and bottle conditioned, this sour saison has rich and deep juicy peach aromas, along with complex acidity and oak character. 6.7%

YOU’RE WELCOME: Another four-year anniversary IPA, You’re Welcome is a triple IPA with an irresponsible amount Sabro, Nelson Sauvin, Citra, and Motu in the dry hop. 11.2%