Tournament of Washington IPAs: Round One results

Over a three-week period, Peaks and Pints pits 64 of Washington state’s best in a IBU-to-IBU battle of the India Pale Ale. This is a tournament, folks, not a playoff. Each match is do or die — one misstep and you’re out of the dance. Wort didn’t cool fast enough, left sediment in the conical fermenter too long, and you can pack your brewers paddle and go home. Sure, there are plenty of brewers wearing “I Hop Craft Beer” T-shirts who can brew a mighty fine batch of IPA. Washington state’s finest IPA purveyors brew it perfect every time.

The Tournament of Beer: Washington State IPAs hosts competitions Monday through Friday up to the championship game Saturday, April 29 live at Peaks and Pints bottle shop, taproom and restaurant in Tacoma’s Proctor District. Without further ado, let’s take a gander at yesterday’s results. After the weekend break, eight new Washington state IPAs go at it around 9 a.m. Monday, April 17.

Everything Skookum Brewery does, it does big: big taproom, big cribbage boards and big IPAs full of big flavor. The other big thing Skookum Brewery does is win big. Yesterday the Arlington Brewery grabbed 80 percent of the votes over Structures Brewing’s fancy Crypt Key IPA. Did Skookum bartender Angel’s big beard have anything to do with the big win? It didn’t hurt. Skookum secures a spot in the Second Round.

If there’s a trend developing it’s that Tournament of Beer voters are wowed by balance. Just making a beer bitter is pointless. You may as well drink a glass of bitter gourd juice. The Holy Grail is a beer that strikes the right balance between bitterness, aroma and malt profile. Every now and then there comes a beer that transcends the numerical tyranny of the IBU and delivers on this mythical promise. Rainy Daze’s four hops in five additions, 87 IBU Pourhouse IPA strikes the right balance. While Diamond Knot’s malty IPA and fun taproom are what dreams are made of, voters flocked toward the IBU in this contest, awarding Pourhouse 55 percent of the votes at a Second Round slot.

Hops are the star ingredient in No-Li Brewhouse’s Jet Star Imperial IPA. Named after the roller coaster that starred at the Spokane 1974 World Expo, Jet Star sees a double dose of hops, packing 115 IBUs and 8.1 percent alcohol by volume. Moses Lake’s Ten Pin Brewing threw everything, including several 4-6-7 splits, at No-Li Brewhouse but Jet Star was too much for Head Pin. With 60 percent of the votes, Jet Star advances to the Second Round.

Serving delicious IPAs to intoxicated masses in Spokane is business genius, probably why No-Li Brewhouse does it. However, name recognition also goes long way — and Walking Man Brewing has been walking the walk since 1999. In this contest, pine, citrus and resiny notes ruled the day with Walking Man securing roughly 57 percent of the votes to join its fellow Homo Erectus Imperial IPA in the Second Round.

Let’s check the Standard Reference Method. The following are advancing to the Second Round:

OK, pour a pint and dive into today’s First Round IPA battles. Vote for one IPA per game. Voting for today’s IPA battles ends at 11:45 p.m. today. 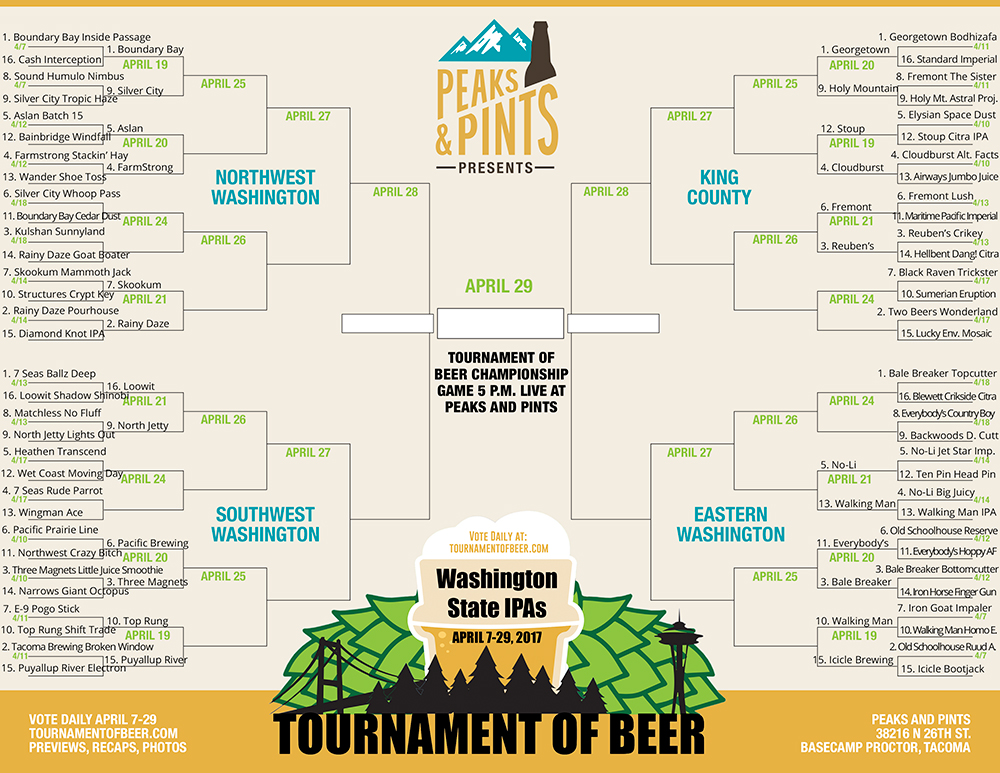