Tournament of Washington IPAs: Second Round results — For more than two weeks, Peaks and Pints challenged 64 of Washington state’s best IPAs to go IBU-to-IBU in craft beer combat. Some fell easily by the wayside — either due to a rogue taproom employee or simply because they faced a superior opponent. Pint by pint, we drank our way through two weeks. It was do-or-die, win-or-fly, bring-your-best-or-acetaldehyde.

Here’s a recap of yesterday’s Tournament of Beer Second Round action. The last eight Washington state IPAs in the Second Round battle Monday, April 24. See you back here Monday to begin the final week of voting. …

Rainy Daze Brewing kept a lead all day with ferocious play from their Pourhouse IPA. The well-balance IPA was too much for Skookum’s Mammoth Jack. Rainy Daze kept Pouring it all day until the final buzzer. Pourhouse grabbed 61 percent of the vote and moves into the Sweet Wort 16 to battle the winner of its brother beer, Goat Boater IPA, and Boundary Bay Brewery’s Cedar Dust IPA.

These two Southwest Washington breweries bounced IBUs off each other all day until around 4 p.m. when Lights Out Double IPA began to pull away. Rumor has it North Jetty Brewing hit all the surf shops up and down the coast. We have no idea what Shadow Shinobi did because, well, it’s a ninja. As the clock hit 11:45 p.m., Lights Out Double IPA had 65 percent of the votes, and a spot in the Sweet Wort 16.

6. Lush IPA, Fremont Brewing (1050 N. 34th St., Seattle) vs. 3. Crikey IPA, Reuben’s Brews (5010 14th Ave. NW, Seattle)
These two Seattle breweries know this is a tournament, not a playoff. They know this match was do or die — one misstep and they would be out of the dance. Fremont took a big gamble switching gears to focus on their Bellingham Beer Week beer, an imperial porter with vanilla, coffee and coconut. Reuben’s countered by extending its taproom hours and added a lunchtime food truck. The votes reflected these two moves with the lead bouncing back and forth all day. When the final buzzer sounded, Fremont Brewing squeaked a win by 22 votes and waits for Monday’s game winner between Sumerian Brewing’s Hopruption IPA and Two Beers’ Wonderland Trail IPA.

Yes, No-Li Brewhouse’s Jet Star Imperial IPA was seeded much higher and their Jet Star is a hophead’s dream beer with late kettle hop additions and dry-hopping, but Walking Man’s flagship gold medal winning IPA is “versatile, drinkable and delicious.” The deciding factor in this match-up came down to fans, and Walking Man has a top-notch fan base. The other Washington state IPAs need to sharpen their IBUs because Walking Man IPA is the real deal. With 74 percent of the vote, the Stevenson brewery and its beloved IPA move closer to the title.

Let’s check the fermenter. The following are advancing to the Sweet Wort 16: 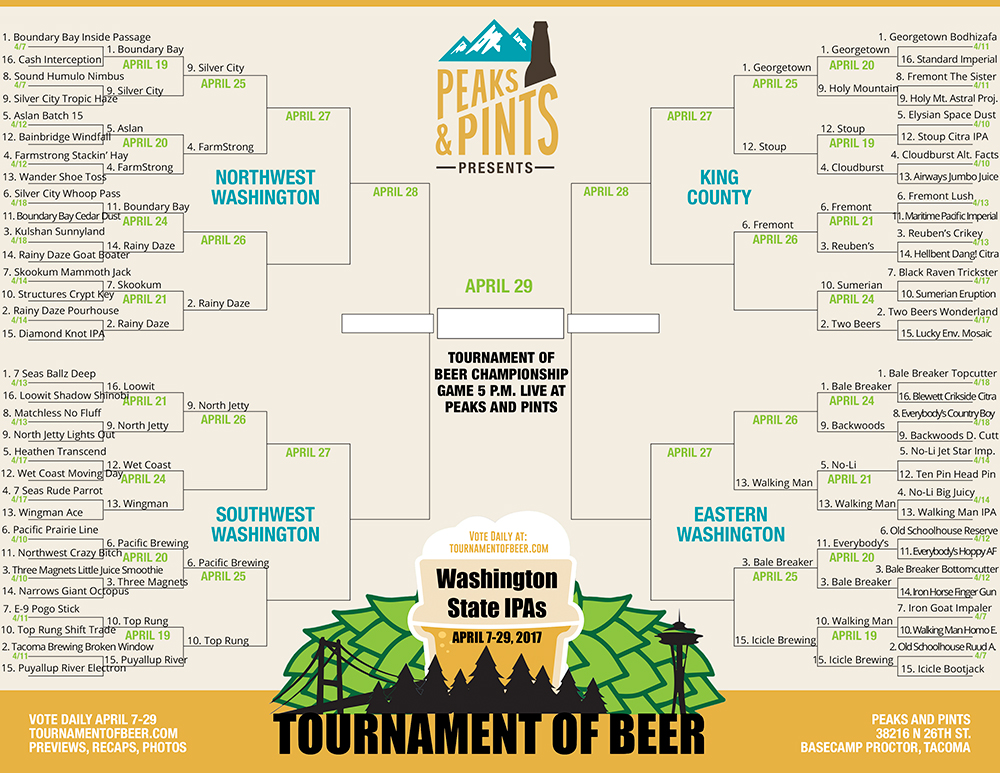