Did you just turn 21 years of age? Well gather around and listen to my tale. There was once a time when those of us aged more than 25 years — you know, “old farts” — didn’t have a fully interactive, voice-activated GPS in our pocket at all times. We had to carry around giant, totally unfoldable pieces of tree carcass with directions scrawled on them in tiny, barely legible print to know where we were going. You know, maps. And in this age of smartphones, it would be almost inconceivable that anyone would still lug one of those dinosaurs around.

It’s really fun to stick ’em to the wall and put red pins in all the places you’ve been, perhaps with strings webbing out from your home base. Can’t do that with a smart phone can you, Snapchatface?

And for South Sound beerophiles out there, the map is alive and kicking. 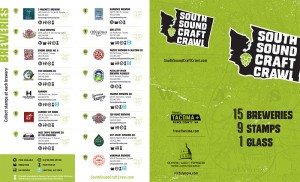 You see there is this fellow named Ken Thoburn who brews beer at Wingman Brewers over by the Tacoma Dome. While visiting Kentucky to pick up bourbon barrels for South Sound breweries, Thoburn became swept up in the state’s Bourbon Trail. Later, he encountered the Inland NW Ale Trail in Eastern Washington. All trails led to the idea of creating a beer trail program in the South Sound. Thoburn jumped on his beer bronco and hit the trail, tossing the idea to each South Sound brewery.

“Everyone is onboard with the idea of a project that helps promote our area and local craft,” says Thoburn. “We got about half of the breweries in the area to participate and go along with my crazy idea. It looks like it’s going to turn out great.”

“We already have a few late comers that will be added to the map next year,” says Thoburn.

Our hero Thoburn’s next task was to create an easy way for South Sound beerophiles to hit the trail. Thoburn traveled down the street to JayRay A Place To Think, where Bridget Baeth and the advertising agency’s talent designed the logo and a beautiful, four-page brochure. Included in the piece is a little tale explaining the course; a list of the breweries noting food options, kid-friendly environments and gluten-free options; a map and the reward.

Oh, yes, you will receive a prize for visiting nine of the 15 breweries. Each brewery will have its own stamp to mark the map. Collect nine stamps and a South Sound Craft Crawl pint glass will sit in your kitchen cupboard forever.

“The brochure is currently at the printers, but I think we’re on schedule to have them in all the breweries June 5,” says Baeth. “The Tacoma Regional Convention and Visitor Bureau and Thurston County Visitor Bureau see this project as a huge tourism opportunity, so both are on board to promote it.”

How many times can you do the crawl?

There isn’t a limit. “If you wanted to do it 800 times and drink 7,200 beers we would all be OK with that — assuming you did it in a safe way,” says Thoburn. “We do not recommend trying to get nine stamps in one day, but a good way to get a safe head start would be to take part in a BikeRoBrew tour (May 30) or get on one of Lifestyle Valet’s Craft Beer Tours.

“The Tourism Bureau will help market the South Sound Craft Crawl, help distribute the brochures and also be a location to redeem the stamps for the pint glass at our Visitor Information Center on Broadway,” says Jaime Vogt, vice president of market at Tacoma Regional Convention and Visitor Bureau. “You will also be able to claim your pint glass at the participating breweries.”

Is there a bonus prize for doing it on a bicycle?

“Most casual bicycle riders could probably complete the crawl on a bike,” says Thoburn. “There are a number of breweries accessible from the downtown Link Light Rail in Tacoma, as well. For those who don’t usually spend time in Olympia or Gig Harbor checking those breweries off your list could be a great way to spend an afternoon as well regardless of transportation.”

Of course, seasoned — or saisoned, as the case may be — South Sound beer drinkers may already have visited all of the South Sound Craft Crawl breweries For them it’s all about adding another pint glass to their collection.

About the only thing the brochure doesn’t come with is all those red thumbtacks you’ll need. … 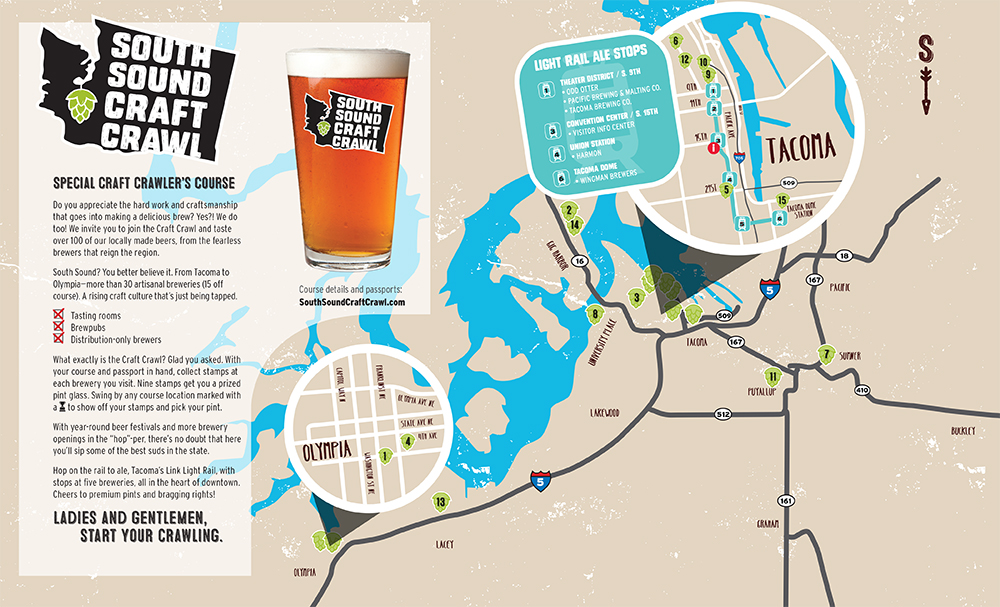