Q and A with Slaughter County Brewing Co. 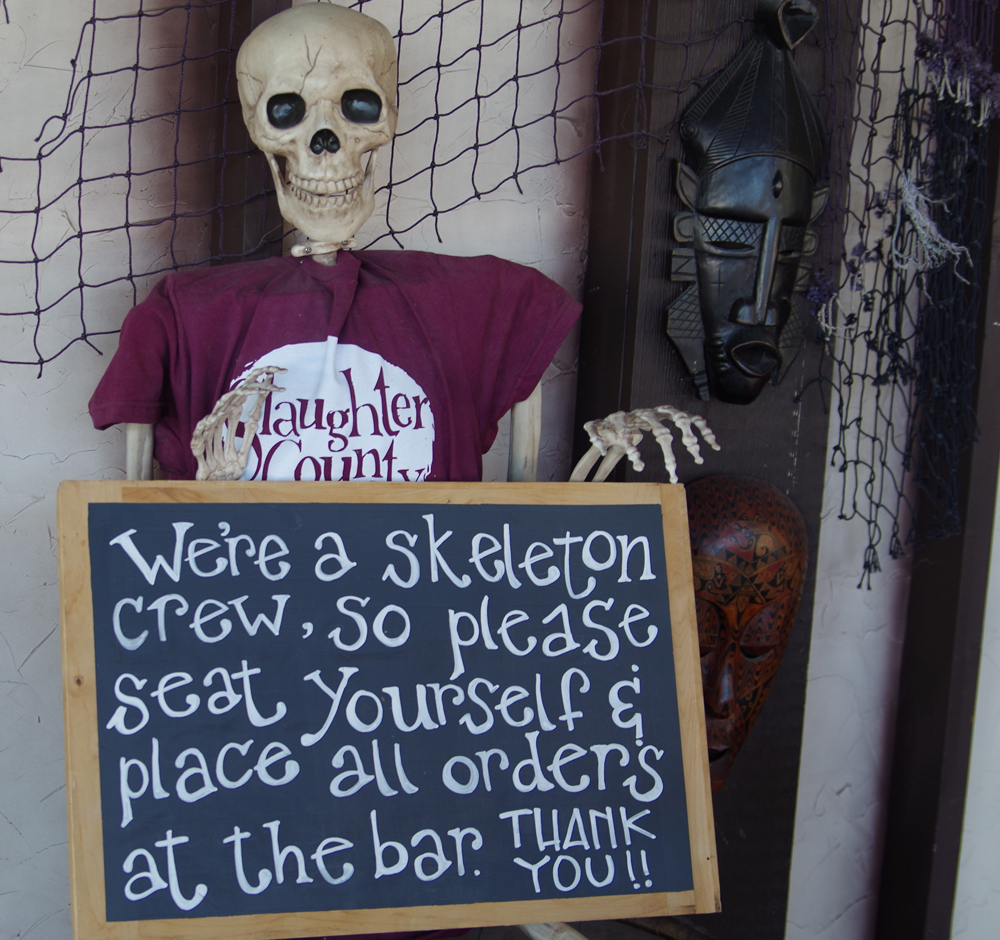 When a pirate screams “Avast!” they’re trying to get your attention. You should pay attention to Slaughter County Brewing Co. in Port Orchard. Scott Kirvin’s 30-year-journey to open his pirate-themed brewery began when a rugby teammates samples him on a homebrew, to homebrewing when he wasn’t clocked in to his software development career to opening his brewery in 2012. Named after Kitsap County’s original name, Slaughter County Kirvin brews his craft beers with a beautiful view of Sinclair Inlet, which separates his brewhouse from Bremerton. Peaks and Pints will host Kirvin and his Slaughter County beers at 6 p.m. Thursday, July 20, but not without first throwing him a few questions.

SCOTT KIRVIN: Yeah, I was amazed. He taught me how to homebrew.

PEAKS AND PINTS: Do you still play rugby?

KIRVIN: No, not anymore. I miss it, but I can’t risk breaking a bone now that I run a brewery.

PEAKS AND PINTS: What was the focus of your software company?

KIRVIN: We published 3D rendering software. The company was called SplutterFish and our flagship software was Brazil r/s.  We were really the first to bring high-end, film quality rendering to the desktop.  The software was used in a ton of films and ended up very popular in the architectural visualization market too.

PEAKS AND PINTS: What did you bring from your software company to the beer business?

KIRVIN: Hmm …. interesting question.  A ton of pessimism, maybe?  The two businesses are very different, and even things such as marketing have really needed an entirely different approach. I think I’m still trying to find a way to fully utilize my personal skill sets in this business.

PEAKS AND PINTS: What advice would you have for homebrewers considering going pro?

KIRVIN: Run! Just kidding … make great beer. Be able to make a variety of beer well — unless you’re Georgetown, then just make one really well and expand after you dominate that niche.  Keep the brew system as simple as possible. You don’t need to overcomplicate your brewhouse just to copy what the bigger guys are doing; hard-piped, automated, hypercoction mash systems may be overkill for you needs. You’ll spend a lot of money and time fixing problems in an overly complicated setup. We’re on a three-barrel system that works like a glorified homebrew setup.  As you get into bigger and bigger systems, the physics and logistics of the brewing processes change and that’s where those more complicated and expensive builds become necessary. Also, at the end of the day, running a brewery or brewpub is just a business. Running a small brewery is a tough business where you’re making pennies and doing the hard work out of love. Create a business plan. Make it thorough, Interview as many brewers and owners as you can. Also, plan for the worst. We’re in a Navy town; the 2013 government shutdown nearly killed us. Nearby road construction has hurt us similarly, and on and on.

PEAKS AND PINTS: Your taproom looks like the Pirates of the Caribbean Disneyland ride. Do customers dressed as pirates drink in your joint?

KIRVIN (laughing): Occasionally.  We have events, such as our Aug. 12 anniversary party, where we all dress up, fire cannons and say “aaarrrgh” a lot.  We also have random schooner crews show up unannounced. Kitsap County has a smattering of pirate-themed events and Slaughter County Brewing seems to be the preferred after party spot.

PEAKS AND PINTS: We’re throwing a firkin of your Bondsman Bitter ESB on our bar top Thursday. Where do you think the ESB sits in today’s craft beer world?

KIRVIN: I think a good ESB fits in well between beers that are hoppy, with a mild malt profile, such as IPAs and pales, and your under-hopped alternatives — ambers, reds, browns, etc.  It’s a very a drinkable style that hasn’t been really well represented. Ours is brewed pretty traditionally — Maris Otter and Crystal English malts, Nottingham English yeast, open fermented, hopped traditionally with (Nugget, Fuggle and Golding.

PEAKS AND PINTS: We’re also pouring your Gorst Premium Pilsner. How did you choose your pilsner style?

KIRVIN: That one’s easy.  I was at a homebrew meeting and a friend had brewed a really nice, clean, Bohemian pilsner beer. It was brewed with German ale yeast rather than lagered. That became our Gorst Premium Pilsner and — with the addition of more water — our Gorst Light.

PEAKS AND PINTS: We’re excited to pour your Belgian Wit with blackberries and anise. How has the response been to the recipe?

KIRVIN: That’s the Luna Negra, which is Spanish for “Black Moon.”  It took a while to catch on, and over the years we’ve pulled back the star anise a bit. Today, it’s super popular.  It has about a third pound of blackberries in every gallon. Our cider and wine drinkers are hooked. It’s not a straight-up fruit beer because we intentionally combined the sweet fruit with savory spices.  It’s supposed to be our summer seasonal only, but we brew it almost year round. The Luna Negra was our best seller at last weekend’s Bremerton Summer Brewfest.

PEAKS AND PINTS: What does the future hold for Slaughter County Brewing?

KIRVIN (laughing): Same as always, Pinky: Keep calm and try to take over the world!  Just kidding. I would really like to create an inclusive, sustainable business that supports the communities that support us.