Every December — while the bartenders close down our Proctor District craft beer bar, bottle shop and restaurant for the night — Peaks & Pints co-owner Pappi Swarner grabs three holiday beers, heads upstairs to his office, cranks his computer speaks to an 11 and watches holiday Youtube videos. Obviously, he can’t perform his holiday tradition this year … at Peaks & Pints. No, his holiday glee now takes place inside his home, much to the chagrin of his wife and daughter. In the spirit of giving, we offer you the chance to share his joy. Today, he pairs the three English beers below with A Christmas Carol: The Musical. There are hundreds upon hundreds of remakes of the Dickens classic over the years, but Pappi has his eyes on the 2004 NBC musical version starring Frasier as Scrooge, George Costanza are Marley, and Jennifer Love Hewitt as Scrooge’s lost love, Emily. It’s horrible cheesy, shiny and polished, not really befitting 19th century London, which is why Peaks and Pints To-Go Christmas Beer Flight: Silly Christmas Carol offers English beers. We need to keep it real. Cheers! 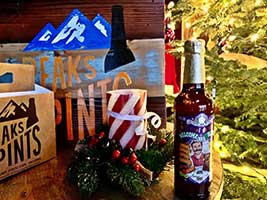 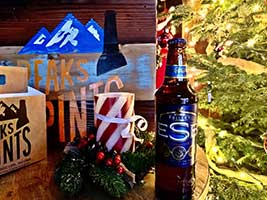 ESB was launched into the Fuller’s Brewery’s family in 1971, as a winter brew to replace a beer named Old Burton Extra. Twice named World Champion Beer, Fuller’s ESB is one of the most decorated ales of its time. It starts with a strong aroma that is both malty and hoppy, accompanied by some fruity, apple aromas. It’s is a strong, full-bodied, mahogany-colored ale with a mellow bitterness, a slight hint of earthiness, and soft floral notes as well. 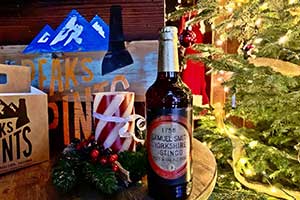