Peaks and Pints Pilot Program: Snow Barleywines On the Fly

Yesterday, Peaks & Pints proclaimed stouts as the perfect snow beer. We’re not wrong. But if you don’t have barleywines next on the list of “I just slipped on the snow carrying the groceries inside, I’m freezing and I need a big ass beer stat,” you’re missing out. There’s a tremendous variance in flavor profiles — from toffee-like sweetness to hoopy — yet they typically share a smooth drinkability despite their high alcohol by volume tags. Barleywines are the liquid embodiment of curling up on a bearskin rug in front of a fire. Besides, barleywine is life. Today seems like a good day to offer a to-go flight of barleywines — a flight we call Peaks and Pints Pilot Program: Snow Barleywines On the Fly.

Peaks and Pints Pilot Program: Snow Barleywines On the Fly 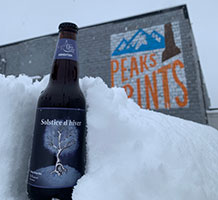 Brasserie Dieu du Ciel!, the tiny brewpub at the edge of Montréal’s city center, is a common exclamation, meaning “God in Heaven!” more or less, which is undoubtedly the politest oath you are likely to hear in Montréal — a city with a well-known penchant for turning religious sentiments into profanity. The brewery’s holiday Solstice d’Hiver barleywine is delicately sweet and liquor-like with a hint of burnt caramel coming from the malt and a prolonged boiling time. It is a very bitter beer with aromas of hops and alcohol, and flavors reminiscent of red fruit brought by the English-type yeast they use to ferment it. The aftertaste is accentuated by the wonderful flavor of hops. 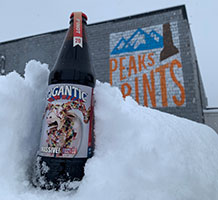 Peaks & Pints has several Gigantic Brewing’s 2020 MASSIVE barleywine variants in the house. Ironically, we don’t have the base MASSIVE! — which uses only British Halcyon pale malt and boiled for eight hours, giving the beer a rich and creamy palate with cherry, dried fruit and fig, plus toffee in the finish with a touch of bitterness. For this flight, we suggest the Pinot Barrel Aged version. The Pinot barrel isn’t as sweet as the rum or bourbon barrel, but it adds dark fruit and oak complexity — plus caramel, some backing hop bitterness, and notes of red wine. 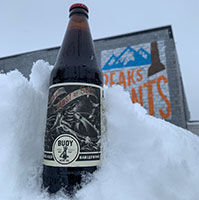 Love, Lost At Sea 2021 has returned for the fourth rendition of Buoy Beer’s barrel-aged barleywine. It has a piquant and distinctive malt profile achieved with a dense grist of British pale, British Crystal, Chocolate, and special roast malts. Its smooth, warming, toasted sweet flavors are balanced with a healthy dose of Oregon hops. Next, it’s aged in OOLA Distilling bourbon barrels for 10 months for the beer version of Fig Newtons. 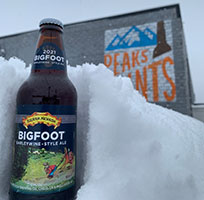 Sierra Nevada Brewing’s cult classic was first brewed in 1983 and is considered to be one the best American barleywines being brewed today. Wildly hoppy — Chinook as bittering hops and Cascade, Centennial and Chinook for finishing hops — and balanced by a fierce malt backbone, this brew will age gracefully for years and years — much like the story behind that blurry photo you took that one time of something that could maybe probably be Bigfoot.

Collaboration with The Lost Abbey to celebrate Breakside Brewery’s 10 anniversary, this is a riff on an English barleywine, albeit with more chocolaty notes and a healthy dose of baking spice and dehydrated pumpkin tempered with a 2-year-old barrel-aged stout.