Peaks and Pints Pilot Program: Porters On The Fly

There’s nothing quite like a good porter; Peaks and Pints can recognize one almost by its aroma alone. These dark, often full-bodied beers have something of an attitude thanks to their caramel and chocolate tones. The origins of the style are traced to the 1700s, when it was a favorite beer of the porters who worked the shipyards in London. In the U.S., the porter style nearly vanished in the years following Prohibition, as light-bodied lagers appealed more to the masses. Homebrewers and small craft beer makers helped revive the style. Today, Peaks and Pints porters in a to-go beer flight we call Peaks and Pints Pilot Program: Porters On The Fly.

Peaks and Pints Pilot Program: Porters On The Fly 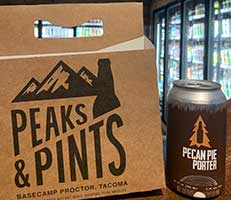 Nestled on the edge of lumber country along the Columbia Gorge, Backwoods Brewing Co.’s Pecan Pie Porter satisfies the sweet tooth. This mahogany-colored porter, brewed with whole PECANS, showcases the nut’s earthiness in the aroma. Made with five different grains, including chocolate and caramel malt, this seasonal porter gives off subtle chocolate notes, complimented with hints of vanilla and pecan. It put Thanksgiving has arrived. 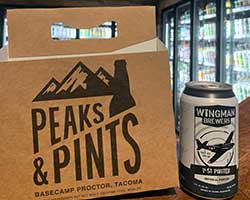 The P-51 Porter was Wingman Brewers’ first real beer recipe. “It goes back to 2008 when Derrick (Moyer) and I were home brewing,” explains Wingman co-founder Ken Thoburn. “At the time, Lazy Boy Porter from Everett was my favorite beer around, so we tried to emulate that. The beer was initially made for a friend’s birthday and called Nalty’s Tall Order Porter since he’s a tall dude and asked us to make a Porter for his birthday party. The beer went over so well with our friends that it remains the only recipe we’ve never changed since Wingman started … with Washington-grown barley and Moxie valley hops.” The P-51 Porter is a robust and clean-finishing porter that offers rich, malty flavors that highlight hints of chocolate, coffee, nuts and smoke. Wingman is known for their porters. It’s what they do. 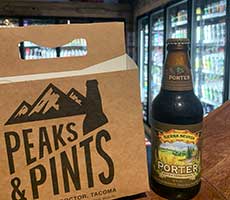 For a brewery that produces so much beer (almost 19 million gallons in 2005 alone), it’s a great feat that Sierra Nevada‘s brews continue to be incredible. Of course the immaculate condition they keep the brewery in must play a part in their consistency, not to mention the fastidious care the brewers put into all of their beers. Showcasing a mahogany color and a silky tan head, this porter tenders very noticeable hops in both its flavor and aroma, as well as coffee notes. And while Sierra Nevada’s version is a bit hoppier than other porters, we’d expect nothing less from this hop-friendly brewery. 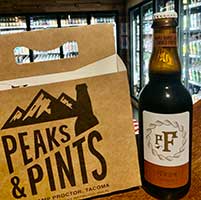 pFriem Family Brewers‘ porter is made with smoked malt brewed to high strength, then aged in barrels first used for bourbon, then maple syrup, and finally this Maple Syrup Barrel Aged Smoked Porter. It’s potent, smoky and rich, with the aroma of syrup you’d drizzle on a stack of flapjacks, followed by notes of pecan pie baking in a wood-fired oven, rich toffee, and dark chocolate delight the palate before giving way to a decadent finish.