Peaks and Pints Pilot Program: Gueuze On The Fly

Before diving into gueuze we must first consider the lambic. Lambic originated more than 500 years ago in the Senne River Valley, south and west of Brussels, Belgium. Lambics are unique in that they are brewed with at least 30 percent unmalted wheat in addition to malted barley, preserved with aged hops, aged in oak barrels, and most differently, are spontaneously fermented. In traditional lambic brewing, the beer is boiled for an extraordinarily long time — usually at least three hours — and then the warm beer is pumped into a broad, shallow vessel called a koelship. The brew is left to cool overnight, uncovered, and the microbes that live in the brewery and blow in through open louvers settle into the liquid and begin the fermentation process. The “infected” liquid is then pumped into oak barrels to ferment and age for at least one year. Unblended lambic is beer aged from 1 to 3 years that is drunk straight. It is extremely tart and generally has little remaining carbonation, since the oak barrels in which it was aged are permeable and the CO2 escapes. Gueuze (pronounced Gooze) isn’t a different beer but rather a blend of lambics of varying ages and provenances — usually a mixture of old (3 and 2 years old) and young (one year old) lambics — then re-fermented in the bottle. The nature of the spontaneous fermentation means that each barrel of lambic is different — blending many barrels creates a balanced and recognizable product from year to year. Today, Peaks & Pints suggests taking home several gueuze bottles in a to-go flight we call Peaks and Pints Pilot Program: Gueuze On The Fly.

Peaks and Pints Pilot Program: Gueuze On The Fly 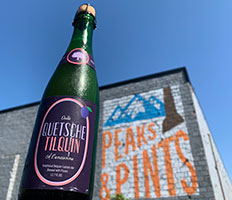 Perhaps the most famous gueuze brewery is Gueuzerie Tilquin. In 2009, a former bioengineer named Pierre Tilquin (it’s pronounced “till-CAN,” with a nasalized final vowel) founded the small family brewery based in Bierghes in Belgium’s Senne valley. Tilquin purchases worts from Boon, Lindemans, Cantillon and Girardin, then ferments them in their own oak barrels. This allows for the blending — typically 50 percent one-year old lambic, 30 percent two-year old lambic and 20 percent three-year old lambic. Quetsche Tilquin is a spontaneous fermentation beer obtained from the fermentation of destoned fresh purple plums  in a blend of 1- and 2-year-old lambics for a period of 4 months. Unfiltered and unpasteurized, it is re-fermented in the bottle for a minimum period of 3 months. Plum brandy perfume hits the nose, followed by slight tartness, but also fruity and round. It also has a slight dryness from the skin of the plums. 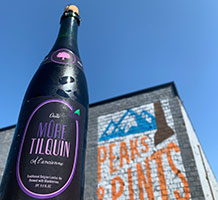 The Mûre Tilquin à l’ancienne is a spontaneous fermentation beer obtained from the fermentation of fresh or frozen blackberries in young lambics, blended with 1, 2 and 3 years lambic to reach a final concentration of fruits of 260-300 gr fruit per liter. It hits the nose with blackberries, slight funk, and even slighter citrus. Taste is full on blackberries with a medium sourness from middle to end. 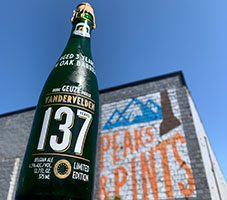 Henri Vandervelden founded Brouwerij Oud Beersel in 1882 in the town of Beersel in Flemish Brabant, a province of Flanders, one of the three regions of Belgium. As you might have guessed, Oude Geuze Vieille Vandervelden 137 honors the brewery’s founder. Released in the spring of 2019, Oude Geuze Vieille Vandervelden 137 is an unique blend that consists only of 3-year-old lambics from three foeders used for the maturation of Brunello di Montalcino, one of Italy’s best wines. It’s a golden, bubbly geuze is a beautifully crafted beer hitting the nose with funk and must, plus notes of white wine, champagne and lambic sugars. Taste also leads with the funk and must a la horse blanket, with the wine and oak transitioning to a citrus and orchard fruit esters finish plus a gentle acidity. 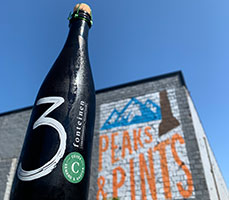 Brouwerij 3 Fonteinen, or Drie Fonteinen, focuses on aging and blending the beers of other lambic brewers. It’s a particularly Belgian concept that the creative process in producing a beer comes not when its ingredients are combined and fermented, but in how the resulting beer is aged and blended with other vintages to create a new transcendant concoction. In this case, 3 Fonteinen Oude Geuze Cuvée Armand & Gaston (season 17/18) Blend No. 80 (6.5%) has been blended with 1-, 2-, and 3-year-old lambics from seven different barrels and originating from 13 brews. This blend contains 48 percent matured and old lambics from eight different brews. Peaks & Pints finds the nose on the yeast-driven peach and zesty citrus side without bitterness, and some sweetness. The taste is bone dry with heavy oak tannins and slight tartness. Initially, there’s a fruity pop but it’s not overly acidic. We taste subtle touch malt sweetness, soft vanilla, and soft toast. The dryness could be called aggressive. 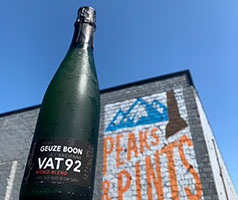