Peaks and Pints Pilot Program: Chocolate Porter On The Fly

The porter style originated in England as the popular preference of the porters who worked in the shipyards. The style, an ale, is commonly dated to the mid-to-early 1700s. Porter is often confused with stout, which is also an ale, because of its similarly dark appearance. But porters can range from brown to deep black, a result of the chocolate or smoked brown malts that are used in brewing. For a chocolate porter, many brewers use chocolate malt to simulate some aspects of chocolate flavor, but the addition of real cacao will provide the sought-after character: chocolate aroma and flavor reminiscent of quality dark chocolate. A good chocolate porter that delivers on its promise of silky, elegant chocolate character is simple to formulate and brew yet can be devilishly difficult to execute well. Peaks & Pints highlights well-executed chocolate porters in our to-go flight, Peaks and Pints Pilot Program: Chocolate Porter On The Fly. 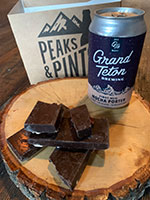 Peaks and Pints Pilot Program: Chocolate Porter On The Fly 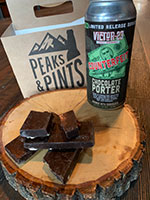 On a stormy evening in November 1971, D.B. Cooper hijacked a Boeing 727 flying from Portland to Seattle. In Seattle, D.B. released all the passengers once the plane was refueled and he was given two parachutes and $200,000 in cash. The plane soon departed, and the pilot was directed to fly south on the Victor-23 airway. Somewhere in Southwest Washington, D.B. Cooper lowered the rear stairway and parachuted to an uncertain fate. Victor-23 Craft Brewery celebrates this unsolved crime and invites you to drink their Counterfeit Chocolate Porter with notes of chocolate, toffee, fig, and molasses. 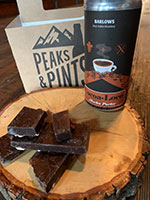 Barlows Brewery added Kafiex Roasters’ single-origin Brazilian cold brew coffee to their base porter. Next, they layered in lactose for the body and Ecuadorian cacao nibs for a double shot of chocolate decadence. The result is a velvety smooth beer boasting baker’s chocolate aroma up front and finishing with hints of almond and cherries. 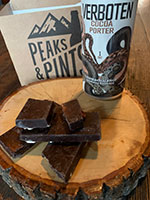