An impressive bomb cyclone is centered about 500 miles west of the Washington state coast. Thankfully, the storm is tracking north and may not have much of an impact on the Puget Sound. That said, expect today to be breezy in the South Sound with gusts up to 30 mph. Expecting the full force of the bomb cyclone, Peaks & Pints gathered a few winter warmers as our to-go flight today. These brews are not within a narrowly defined style; rather, they’re a broad range of beers that offer bold flavors, often with sweet maltiness and lots of alcohol. In fact, if you want to know the whole horrifying holiday gamut permissible in your winter warmer, the BJCP’s guidelines for “Winter Seasonal Beer” include “Christmas cookies, gingerbread, English-type Christmas pudding, evergreen trees, or mulling spices. Any combination of aromatics that suggests the holiday season is welcome.” Terrifying, yes, but again, we’re not really opening up a spice rack and dumping it into beer this season. The BJCP will “allow for brewer creativity as long as the resulting product is balanced and provides some spice presentation.” When Peaks and Pints thinks winter warmer, we think of the beer we list below. Stop by our craft beer bar, bottle shop and restaurant and grab a to-go flight of Peaks and Pints Pilot Program: Bomb Cyclone Warmers On the Fly. 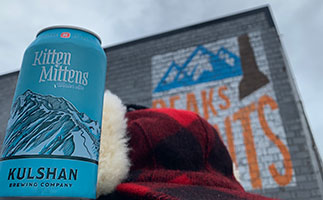 Kulshan Brewing adds four different malts — 2-row, Chocolate, roasted barley and Munich — to Kitten Mittens Winter Ale giving it the rich, medium-bodied winter warmer we adore with a nose of milk chocolate and a touch of brown malt. The body strikes a nice mix of easy malty notes and medium sweet chocolate balanced by earthy hop notes, thanks to the Apollo, Willamette and Fuggle hops. Expect a touch of chocolate liquor on the finish. 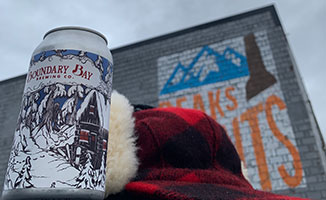 Brewed with Zeus, Simcoe, Willamette and Celeia hops and five malts — including Chocolate malt and oats — Boundary Bay Brewing’s winter seasonal Cabin Fever is rich, malty and deceptively strong. With an extended conditioning period, this winter warmer has a smooth mouthfeel. The aroma has a rich, nutty maltiness with some vanilla, raisins, caramel and bread. The flavor leans sweet nutty initially and then opens up for more of a balance with spicy hops that are not strong and end up creating a lovely lingering bready aftertaste. Nice balance. 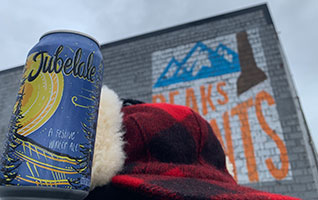 Deschutes Brewery‘s former head brewer John Harris originally brewed Jubelale for Christmas and modeled it after an English strong ale or winter warmer. He brewed that first batch on October 26, 1988, and according to the brewing log, it contained pale malt, caramel malt, chocolate malt, and dextrin malt, and the hops used were Galena, Cascade, “Wills” (assuming Willamette), and Tettnanger in the hop back. Starting gravity was 1.065, and the resulting alcohol was 6.25 percent by volume. The Bend, Oregon brewery has been producing the robust and malty but approachable Jubelale winter festive ale every year since. Its spicy-malt flavor, cocoa, dried fruit and toffee notes ignite cozy warmth on the taste buds — perfect for any number of winter pastimes, like making toys. 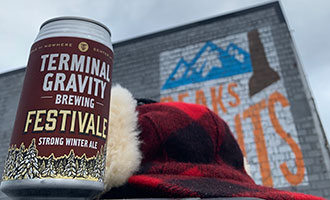 Winter warmers are top-fermenting ales that offer plenty of malty and sweet flavors alongside a balanced hop character. Many of these tasty brews are blended with spices, which give the style its trademark “warmth.” Terminal Gravity Brewing’s winter warmer is reminiscent of British strong or old ales. The color is deep ruby brown and produces a fine cream-colored head. This beer has a complex malt and hop profile with a nice alcoholic warmth in the finish. Brewed to be fairly dry, Festivale is highly drinkable. 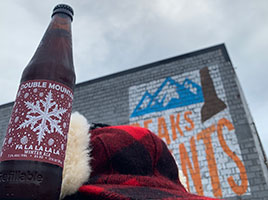