Peaks and Pints Pilot Program: Barleywines On the Fly

Despite its name, the barleywine is indeed a beer but at wine strength — ranging as low as 7-percent alcohol by volume in British versions and upward of 15 percent in American interpretations. Despite its name, barleywines aren’t made with tons of specialty grains, as one might assume. Historically, barleywines are brewed with pale malt, the same malts used for pale ales. Brewers achieve that rich caramel flavor that’s expected in barleywines by extending the length of the boil, which caramelizes the flavors and imparts that deep color. Yeast and hops vary between English-style and American-style barleywines, but either way, the barleywines we drink today are expectedly bold, yet surprisingly complex. Today, Peaks and Pints presents five barleywines to-go in our Peaks and Pints Pilot Program: Barleywines On the Fly. 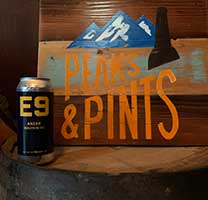 Peaks and Pints Pilot Program: Barleywines On the Fly

English Barleywines lean toward malt flavor at high ABV but without substantial contribution of flavor from the alcohols, as well as not as syrupy or sweet as American versions. Beyond that, there’s a surprising amount of room for interpretation. E9 Brewing’s English version, Aniak, is aged for a year in stainless steel tanks for fruity-ester characteristics complimenting English malt flavors of toffee, biscuit and caramel. 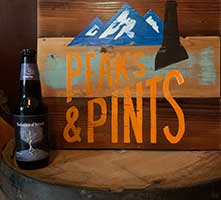 Brasserie Dieu du Ciel!, the tiny brewpub at the edge of Montréal’s city center, is a common exclamation, meaning “God in Heaven!” more or less, which is undoubtedly the most polite oath you are likely to hear in Montréal — a city with a well-known penchant for turning religious sentiments into profanity. The brewery’s holiday Solstice d’Hiver barleywine is delicately sweet and liquor-like with a hint of burnt caramel coming from the malt and a prolonged boiling time. It is a very bitter beer with aromas of hops and alcohol, and flavors reminiscent of red fruit brought by the English-type yeast we use to ferment it. The aftertaste is accentuated by the wonderful flavor of hops. 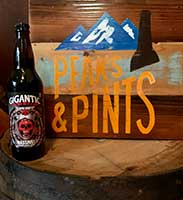 Peaks & Pints has a massive amount of MASSIVE! in the house. We have all seven of Gigantic Brewing’s 2020 MASSIVE variants, as well as the 2018 bourbon and scotch barrels variants and the 2016 bourbon variant. Ironically, we don’t have the base MASSIVE! — which uses only British Halcyon pale malt and boiled for eight hours, giving the beer a rich and creamy palate with cherry, dried fruit and fig, plus toffee in the finish with a touch of bitterness. Since we have the 2020, 2018 and 2016 bourbon barrel-aged variants, we’ll feature those under this single entry in today’s barleywine to-go flight. 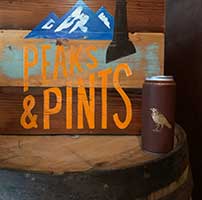 Ex Novo Brewing opened its original North Portland brewpub in 2014 in a unique business model that directed profits toward non-profits/charities with the tagline, “Drink Beer. Do Good.” They let their annual barrel-aged black barleywine sit in barrels for a year before releasing Nevermore 2020. The barleywine is fermented with house-smoked figs and conditioned on cocoa nibs before spending time in Westward Whiskey, Heaven Hill Bourbon, and Oregon Pinot barrels. The cocoa nibs shine, as does caramel flavor, plus a hint of vanilla. 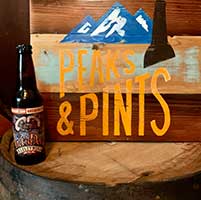 Midnight Sun Brewing is the oldest brewery in Anchorage and the second oldest statewide. Their 13.5 percent Bourbon Barley-Aged Arctic Devil Barleywine made Men’s Journal’s list of the “12 Best Barleywines in the World,” as well as No. 8 Best English Barleywine on BeerAdvocate. Cognac-drenched candied apricots, caramelized brown sugar and dark fruits are cellared for rich flavors, soft vanilla notes and malty booze.