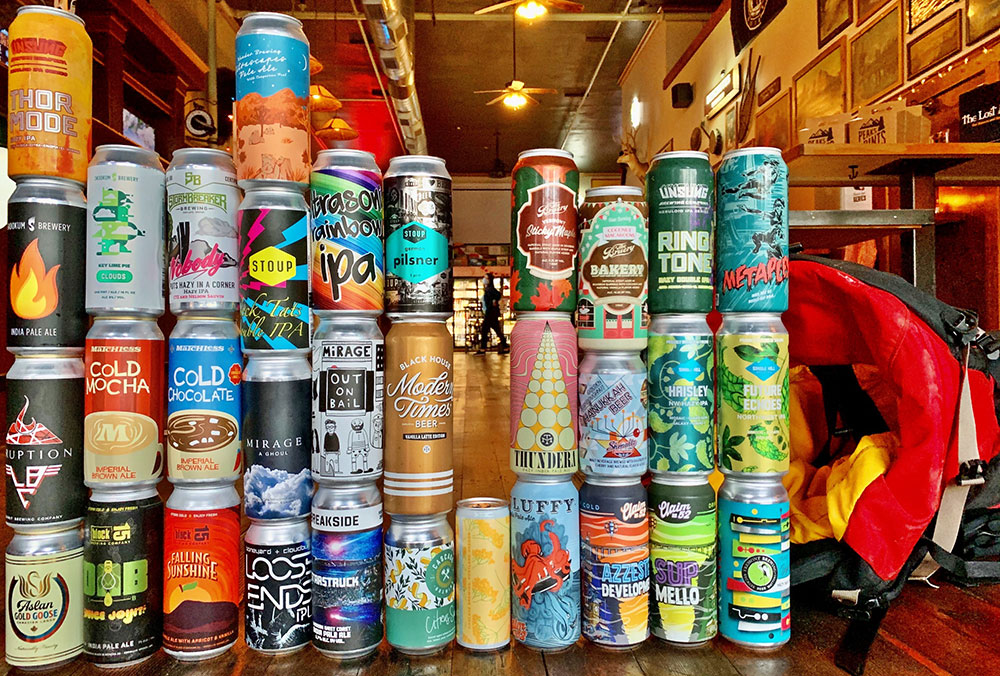 December is here, the Peaks & Pints 18-foot tree is lit, and we’re loading up our backpack with peaks and Pints New Beers In Stock 12.7.20 for the week. What’s in your backpack?

Claim 52 Sup Mello is hopped with Cryo Citra, Cryo Simcoe, and Simcoe for a fluffy, pillowy mouthfeel with grapefruit and tropical citrus notes, 6%

Mirage A Ghoul is a New England-style double IPA brewed with Vic Secret, Mosaic, and Galaxy hops for grapefruit rind, floral and hop burn on the finish, 8.2%

Mirage Out On Bail is a hazy pale brewed with Motueka and doble dry hopped with Cashmere cryo and more Motueka for subtle pineapple and tangerine with all proceeds going to the Grassroots Law Project, 4.4%

Modern Times Black House Vanilla Latte Edition is their coffee oatmeal stout with a generous helping of vanilla, and even more house-roasted coffee, 5.8%

Modern Times Thundera is a hazy IPa brewed with Citra and Idaho 7 hops for a swirling vortex of juicy, tropical, citrusy flavors, 6.7%

Single Hill Haisley IPA has Mosaic, Idaho Gem, Galaxy, and Idaho 7 hops threaded together for apricot and nectarine on the nose, 7%

StormBreaker Nobody Puts Hazy in the Corner opens the dance floor to CTZ and Nelson Sauvin hops for notes of passion fruit, guava and herbal, 6%

Stoup Neck Tats Double IPA is bittered with Chinook with copious amounts of Simcoe added in the whirlpool and dry hop for sharp dank and grassy hop flavor, 8%

Stoup Tropical Blizzard Hazy Double IPA is brewed with wheat and oats, then fermented with a kveik yeast strain plus loads of HBC 692, Galaxy and Mosaic hops for a Category 5 storm of tropical fruit flavors and aromas, 8%

Stoup Ultrasonic Rainbow IPA is brewed with Ahtanum, Loral, Citra, and Ekuanot hops for flavors of citrus and pine, 8%

The Bruery Bakery: Coconut Macaroons is a rich imperial stout drawn from the decadent flavors of coconut macaroons that’s aged in bourbon barrels with coconut and vanilla to attain its pastry-like flavors, 12.2%

Unsung MetaPlex is brewed with Mosaic for a West Coast IPA oozing with dank pineapple notes, 6.5%

Unsung Nebuloid: Ring-Tone hazy double IPA is double dry-hopped with Galaxy, Enigma, Citra, El Dorado, and Azacca, with Idaho 7 in the cold whirlpool, for a pineapple nose followed by notes of kumquats and orange sherbet, 8.4%