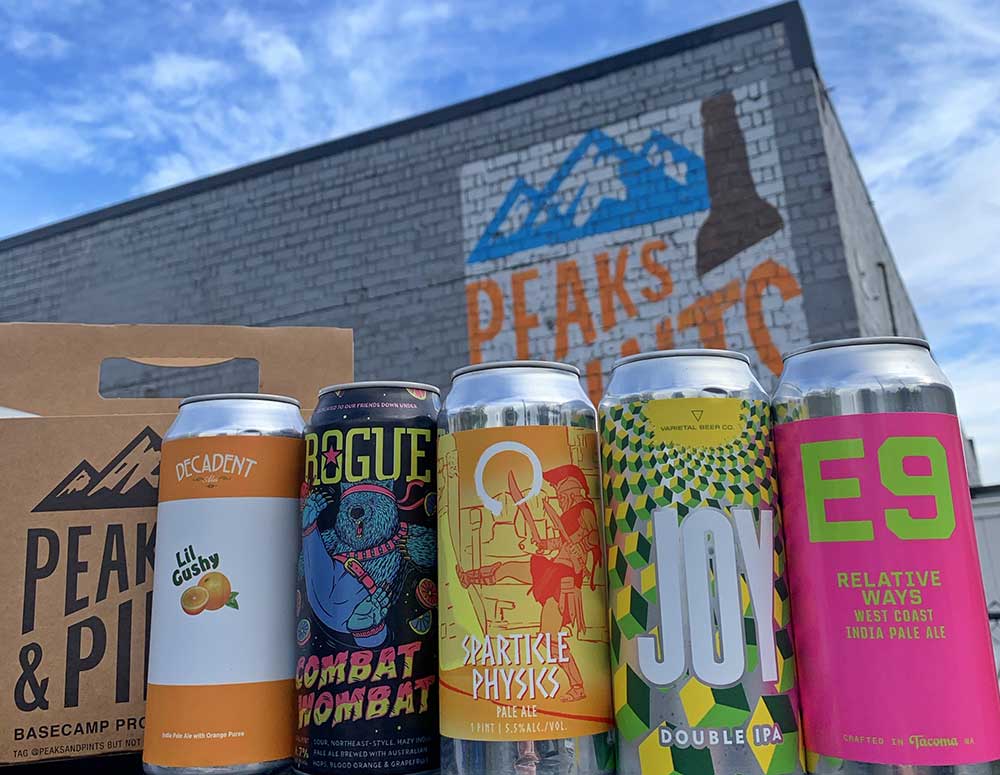 Tacoma is locally known as the “City of Destiny” because the area was chosen to be the western terminus of the Northern Pacific Railroad in the late 19th century.

bad or unfortunate, deserving of regret

Usage example: Even though the Peaks & Pints bartenders warned that filling one of their Campfire Crowlers with beer from the nitro tap isn’t a good idea as the beer would be flat by the time it arrives home, Simon still demanded a crowler of Hale’s Nitro Cream Ale. “It was a lamentable decision as my nitro shots for my Parcheesi Pals wasn’t the hit I anticpated,” Simon explained.

The 2021 Fort George 3-Way IPA will be released at the end of May. Jointing the Astoria brewery this year are Varietal Beer Co. out of Sunnyside, Washington and Moonraker Brewing out of Auburn, California.

As part of Pelican Brewing’s 25th anniversary, the Oregon Coastal brewery has released new commemorative bottle caps featuring a custom 25th birthday logo and 25 unique pelicans under the cap to celebrate 25 years of beer. Pick up a 6-pack bottles of your favorite Pelican beer and pop the cap and look on the underside to see if you find a Golden Pelican Cap. Ten lucky winners of the golden pelican bottle cap giveaway will receive a two-night stay in an Airstream at Hart’s Camp airstream Hotel & RV Park  and a $250 Pelican Brewing gift card.

The term “juicy” refers to the aroma and taste of the beer — meaning it’s reminiscent of fruit juice, typically citrus or stone fruit. These flavors and aromas are primarily driven from fruit-forward hops such as Citra, Mosaic, Galaxy, Amarillo, and El Dorado. These hops are added later in the boil and at whirlpool to maintain the aroma, as well as dry hopped in copious amounts. The other characteristic of juicy beer is sweetness. English yeasts and fruit-forward hops offer sweetness, as well as fruit flavors, and the absence of bittering hops leaves the beer out of balance. Today’s Peaks & Pints to-go beer flight focuses on the juicy — a flight we call Peaks and Pints Pilot Program: Juicy Beer Flight.

Equilibrium Sparticle Physics: The New York brewery took their Citra-based, hazy American pale ale Particle Physics and added Strata to give this spin off an even more aggressive and fruity dimension. It has aromas and flavors of cannabis from the battle fields of Sparta, tropical citrus, nectarine, and pineapple, 5.5%

Rogue Combat Wombat: The fierce combination of a Northeast-style hazy IPA brewed with Australian hops and a sour ale with blood orange and grapefruit inspired both Rogue Ale’s Combat Wombat’s name and its striking label design, 6.7%

Varietal JOY DIPA: Varietal brews a version of JOY annually with their friends from Bron Yr Aur Brewing in Naches, Washington, in memory of their friend Joy Peterson. This year JOY is a double IPA brewed with a lot of 2-row malt, then heavily hopped with Comet (a through-line for the series), Ernest, Citra, and Triumph hops for orange and papaya flavors with a zip to enhance the juicy flavor, 8.1%.