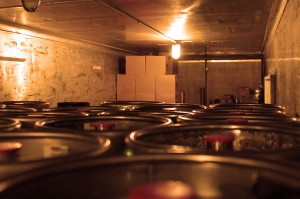 This past March, Carlson was brewing at the Harmon Tap Room when the mash tun door flew open spilling 180-degree wort into his work boots. He received second and third degree burns.

“I had to have skin grafts with pig skin,” says Carlson. “That’s okay, because it just made me that much more in tune with my inner beer-dinner pairing geekness that I have.”

He jokes, but Carlson is still making trips to the doctor’s office.

What scary Harmon beer can you drink this Halloween?

“For a Halloween beer, I would suggest our Fall Ball Harvest Red or Headless Horseman Pumpkin Spiced Blonde,” says Carlson. “The Fall Ball also makes and amazing food pairing beer for Thanksgiving. I even use it in my Turkey Brine every year.”

According to Carlson, his Fall Ball (8.1% ABV) is an Imperial Red/Amber brewed with an extra helping of Munich malt to give it a rich, deep amber color and complex malt body. Other malts in the Fall Ball include Melanoidin, Dextrin, 15L, 45L and 120L Crystal malts, finished with a little chocolate malt. Centennial, Liberty and Fuggle hops represent.

“We have also added a touch of pumpkin puree, pumpkin pie spice and cinnamon sticks to round off the finish,” adds Carlson.