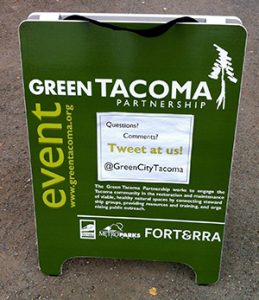 In many urban environments, open, public space is often a commodity in short supply. Parks, gardens and green spaces compete with roads, parking lots, commercial development and other demands of the city. Green spaces plays a critical role in storm water control by absorbing and holding rainwater, which helps control flooding and erosion that can be caused by heavy rains. Green spaces in urban areas also help to filter and clean water runoff from streets. Areas such as gulches are even more special because these truly natural areas within our urban setting are covered in trees, which help to clean our air, reduce urban noise, and provide pockets for natural recreation within the city.

Aside from being pretty, trees provide a host of benefits for the cities in which they grow. Trees literally clean the air by absorbing air pollutants and releasing oxygen. They reduce storm water runoff and erosion; they temper climate; they can save energy; they create wild life habitat; they can improve health, serve as screens, and strengthen community. They can even help contribute to a community’s economy and way of life.

But planting trees in a concrete jungle can be tough — mostly because trees have a will of their own, and can mess up more utilitarian features of the landscape such as power lines, homes and sidewalks. But a growing body of research shows that trees are a boon to the cities that choose to plant and manage them.

In response to green space being covered with gray space, we are seeing the emergence of a new urbanism, a planning philosophy that seeks to revive the traditional city planning of an era when cities were designed around human beings not automobiles and strip malls. Healthy forested parks and green spaces have the power to strengthen neighborhoods, provide safe access to nature and offer numerous benefits and “green services“ to our cities.

In 2004, the city of Seattle and the nonprofit Forterra (then-known as Cascade Land Conservancy) joined together to create the Green Seattle Partnership. This public-private partnership was based around a 20-year strategic plan to create “a healthy, livable city with a sustainable urban forest.” The plan identified acres of green space for restoration focusing specifically on addressing invasive plant issues plaguing the city and planting a sustainable, near-native forest for the future. The success of the Green Seattle Partnership has not only spurred five other Puget Sound communities to adopt the Green City model, including Tacoma.

Formed in 2005, the Green Tacoma Partnership is a public-private venture between the city of Tacoma, Metro Parks Tacoma, Forterra, other nonprofits, businesses and community members. According to Green Tacoma partnership’s website, “The Partnership works to engage the Tacoma community in the restoration and maintenance of viable, healthy green spaces by connecting stewardship groups, providing resources and trainings and organizing public outreach. For Tacoma’s residents, working together for a common cause in a local green space is a great way to build community. A community of connected, educated and engaged volunteers is the backbone of a strong, healthy and beautiful Green Tacoma.”

But Green Tacoma Partnership can’t do it alone. They need volunteers to safeguard Tacoma’s forested parks and green spaces.

If you are interested in leading your own forest restoration project, or joining an existing volunteer team that needs a boost, visit Green Tacoma Partnership website and click the volunteer button.