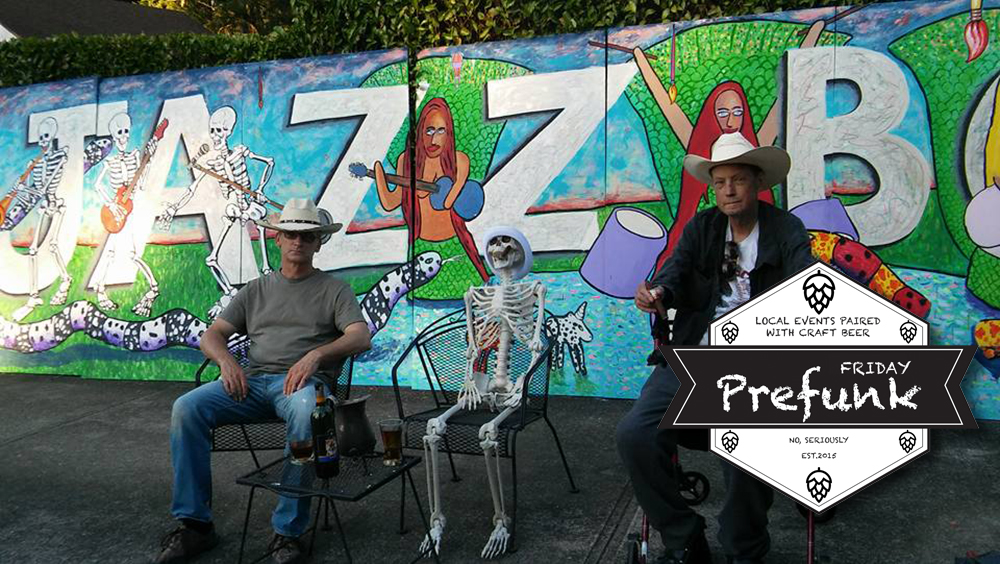 Skeletons rock out. Mermaids rock out. Snakes weave. Unicorns hang out. Hey! Wait a minute! Is it? … It is. Tacoma artist Teddy Haggarty installed a new mural at Jazzbones. For 15 years, Haggarty’s menagerie of psychedelic animals adorned the Sixth Avenue hot spot’s east wall. Maybe you didn’t notice as you grinded before a DJ, but those critters went away months ago after a string of noise complaints drew scrutiny from the city of Tacoma. A soundproof wall was installed, followed by Haggarty’s new mural. Sadly, Haggarty can’t click his heels together with delight as her suffered massive kidney failure in a surgery to remove his toe. In celebration of the new mural, and raise money for Haggarty’s medical bills, Jazzbones will host an all-ages benefit concert at 6:30 p.m. featuring local bands James Hunnicutt, Pig Snout, Old Foals and The Hillbaileys. Haggarty will be on hand to talk about the new installation, and there will also be a silent auction that includes glasswork, a bike and more.

PREFUNK: The idea of session IPA is a bit of an oxymoron. The defining characteristics of India pale ale are super-hoppy and high in alcohol. Indeed, the style’s mythical origin story is all about brewers upping the hop and alcohol content on beer shipped to India so that it wouldn’t spoil en route. IPA was never intended to be sessionable. In recent years, session beers have caught on with American brewers. They are gradually moving away from boozy hop bombs in favor of these more quaffable beers. The move has spawned this style aimed at satisfying hopheads with something lighter and more refreshing. North 47 Brewing Co. in the Tacoma northeast neighborhood of Browns Point has just released its Lounge Lizard Session IPA, a 4.1% ABV with a whopping 72 IBUs. It’s all the hoppy taste of a solid IPA in a clean session core. Have a sip at 3 p.m. when it opens its doors.

In the late 1800s and early 1900s, vaudeville was by far the most popular form of entertainment in America. Sadly, the advent of radio and talking pictures killed it off by about 1925 or so, as people became (and still are) more fascinated by compact, one- or two-dimensional forms of visual stimuli. For now at least, small, cabaret-style shows are a welcome, and burgeoning, addition to fringe culture such as the Lord Franzannian Royal Olympian Spectacular Vaudeville Show hosted by storyteller Elizabeth Lord. Lord is many things: bartender, storyteller, gifted actor — and, once a year, Lord Franzannian, the gruff but lovable drag host of Oly’s premier vaudeville revue. Now in its 10th year, the 8 p.m. vaudeville show has moved into a larger space at Obsidian. Proceeds benefit BigShowCity, a non-profit Performing Arts Organization that supports and helps finance burgeoning artists. They say laughter is good medicine. Here’s a heaping spoonful of proof.

PREFUNK: Family farm Loftus Ranches planted hops in 1932 on 5 acres. Today, the farm is 11,000 acres and home to Bale Breaker Brewing Company. The brewery is run by Loftus Ranch founders B.T. and Leota Loftus’ great-grandchildren: siblings Meghann Quinn and Kevin Smith, along with Meghann’s husband Kevin Quinn. Not surprisingly, Bale Breaker focuses on hoppy beers, and they do it well — especially the brewery’s Bottomcutter IIPA, which has been a draught-only beer — until recently. The Oly Taproom has Bottomcutter in cans. Gobble them up before the show tonight.