Eighteen new breweries have been added to the Washington State Liquor Control Board’s official list of licensed Washington breweries, including Destiny City Brewing operating out of Ben Brown’s garage in Central Tacoma. Destiny looks like a neighborhood, at least from Brown’s garage facing south toward Cheney Stadium. Inside the garage shoving the camping gear to the edge, sits a hot liquor tank, mash-lauter tun and boil kettle half-barrel system, also known as Destiny City Brewing, where Brown and co-founder Aaron Poole crank classic rock and fill kegs for self-distribution, which includes The Cooper Door in Tacoma’s Stadium District and Half Pint Pizza Pub on Sixth Avenue. Brown and Poole took a few minutes from brewing an Oktoberfest-style beer to reveal their destiny.

Brown, a Japanese language teacher in the Bethel School District, met Poole through the other Japanese language teacher in the district, Poole’s wife. Home brewing since 2006, the Midwest transplant Brown invited craft beer drinker by way of Portland, Oregon, Poole over to check out his home-brew system. Full time mechanical engineer Poole, who also lived and drank beer in Portland before 2010, helped Brown stir wort and fill carboys, and after two years of home brewing, the two officially launched Destiny City Brewing the first week of August, introducing the rest of Tacoma to their Citra-Simcoe IPA, a beer they nabbed a Best In Class award at a Pacific Northwest ProAm competition during their home brewing days. They were able to reproduce the recipe and delivered a keg to the Parkway Tavern in Tacoma. Parkway drinkers enjoyed the boldly bitter beer with its tropical notes and piney dankness that the namesake hops deliver, respectively.

Along with the IPA, Brown and Poole officially released their Bohemian Blonde too. Brewed with floor-malted, 100 percent Bohemian Pilsner malt and US Saaz and Sonnet hops from the Yakima Valley, the duo paid homage to their favorite Czech beer, with a malty character to call their own, and “too many IBUs” says Brown, as they both burst into laughter.

Since early August, they followed up several others IPAs, and English Pale Ale, as well as a Kolsch they both adored — a lighter blonde style that everyone loved at Brown’s sister’s wedding but with enough complexity to please true craft beer drinkers. 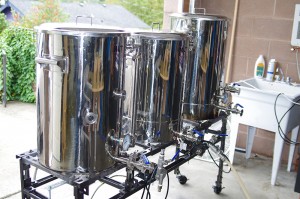 Their home-brew Chocolate Porter grabbed a bronze medal at a ProAm beer competition, and they are thinking about brewing it again on their bigger system. “Cocoa nibs soaked in the secondary just long enough … I was a good one,” says Brown.

“We limited with the kind of malts we can bring into the garage, but we will brew a winter warmer of some sort,” says Poole. “Last year we brewed a massive winter warmer … I think it came in at 19 percent.”

“We still have a lot of 22s left for that one,” adds Brown. “A good percentage of smoked malts in that one, giving it a slight campfire mist to it without being overwhelming.”

The duo also has their sights on taking their beloved Berliner Weisse to a larger scale. 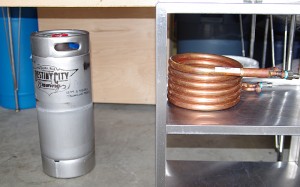 “We learn something new every week. We expect to tweak recipes and fine tune larger volumes over the next few months,” adds Poole. The two are also fine-tuning their sales techniques.

In the 55-galloon wooden barrel sitting behind the jockey box, they’ll take their malt recipe and add a proprietary Brettanomyces yeast strain from Yeast Bay out of San Francisco. Destiny City Brewing can’t wait to see what their malt and six different strains of Brett will create this spring. They have hopes of showcasing their beers at the Gig Harbor Beer Festival in early May, which could be Destiny City Brewing’s first beer festival.

The most recent beer to see the light through their garage door is the Back To Basics IPA. Two factors led to the recipe and name of the IPA: proprietary hops Simcoe, Citra and Mosiac are expensive and harder to acquire, and the two wanted to brew a classic, Northwest IPA.

“We set out to brew an IPA that we all grew up on,” says Poole. “We wanted to showcase traditional IPA hops — Cascade, Centennial and Columbus. All three are in this beer, with a slight emphasis on Cascade.”

The result is a well-balanced, delicious IPA, and their flagship beer. The two hope to build on Back To Basics, a simple, Northwest-style IPA. The three of sipped the beer for close to a full minute without saying a word. Yum.

Brown and Poole’s destiny looks like a 7-barrel system. In a year or two, after selling a bunch of kegs and developing the brand, they’d like to write up the business plan and brew on a much larger system, with an adjoining taproom. Currently, they’re in a residential zone. Customers can’t drop by, grab a camping chair off the shelf and toss back a few Destiny City Citra-Simcoe IPAs.

“You know the ol’ adage: If you want to make a small fortune in brewing,” says Brown. “Start with a large fortune.”

“A rising tide raises all ships, states Brown. “It’s not more competition; it’s more great beer opportunities for everyone. It’s such a friendly beer atmosphere. The brewers swap stories and share techniques. It feels like a great community to be in.”

Destiny City Brewing is on tap at several locations in the South Sound. Their Back To Basics IPA is on at Half Pint Pizza in Tacoma and 99 Bottles in Federal Way. Their Fresh Hop Pale Ale can be found at The Copper Door in Tacoma. Look for their Oktoberfest later this month.